Tell a story, piece by piece

Playwright John McGie brings his play The Chair Series to the Brackendale Art Gallery
May 11, 2016 6:00 PM By: Cathryn Atkinson 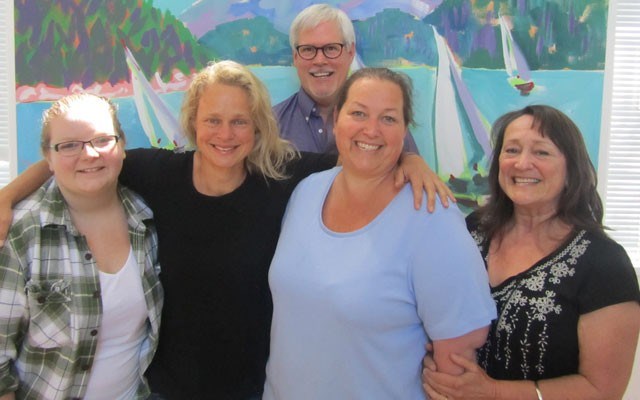 The Chair Series takes a blank stage — empty but for a single prop, an eponymous chair — and uses it in many, many different ways to tell stories.

The play, written by North Vancouver playwright John McGie, is being presented at the Brackendale Art Gallery on Saturday, May 14 and Sunday, May 15, and produced by Squamish's Between Shifts Theatre Company.

Talking to McGie, he says he created a series of vignettes and monologues that tell the stories of individual characters.

"I wanted to write stories that were very close to who the actors are as people," he says.

"It is a really interesting challenge and opportunity as a writer."

Each piece is brief, running up to five minutes each. The stories aren't interwoven, which allows for flexibility when staging a production, McGie says, because each piece can be moved around according to what best suits the overall story, the availability of actors and what works for the audience and location.

McGie, who is also directing the show, calls it "Lego theatre."

The executive director of Between Shifts, Kathy Daniels, says:"Each actor meets John and then he writes pieces or two-handers that he thinks will work and/or challenge the actor. The actors then meet John for rehearsals and tweaking of the piece. A lot of us will be seeing each other and the monologue or scenes for the first time on opening night. It seems risky, but each piece can stand alone as well."

Sea to Sky actors are combining their talents with actors from Vancouver, she adds. Eight actors will read about 12 pieces.

"Working with new people can only enhance one's craft," says Daniels. "I love the Lego theatre concept because it means the project is fluid and adaptable."

Tickets for The Chair Series are $15 for adults and $10 for seniors and students, available online at www.betweenshiftstheatre.com or at the door. The show starts at 8 p.m.

Art is the story of how a friendship between three "sophisticated" men is ripped apart in a hilarious way when one of them buys a painting.

Art will represent the North Shore Zone, which includes the Sea to Sky region, at Theatre BC's Mainstage from July 2 to 9. The play opens the festival on Saturday, July 2.