Ten is the funky number

Soulstream history uncorked for Corncuopia at ARTrageous
Nov 9, 2007 4:39 AM By: Nicole Fitzgerald 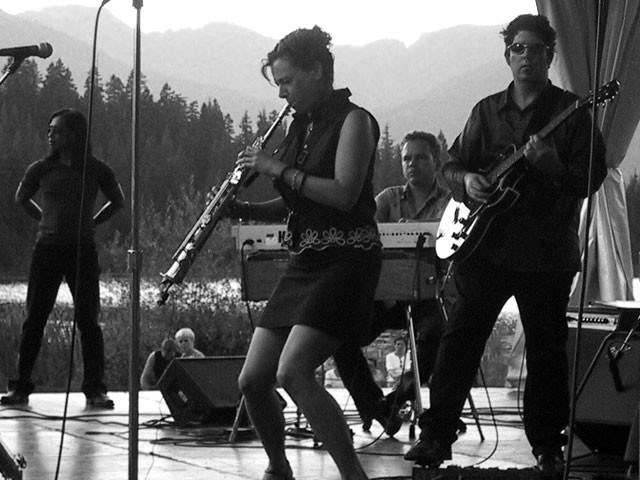 Instrumental Anniversary Soulstream celebrates a decade of making music at ARTrageous on Thursday, Nov. 8 at 9 p.m. at the Brewhouse as part of Cornucopia celebrations. The festival after party explodes with art, including live music, performance acts, art stations, food, wine and more. All proceeds benefit the Whistler Arts Council.

Learning the history of how the Vancouver groove band Soulstream came together was a bit like sitting down to read Encyclopedia Britannica all the way up to “S” — but with 10 band members, what do you expect?

Some might remember Soulstream’s humble beginnings in the mid-1990s when Soulstream ringmaster Randall Stoll led a four-piece acid jazz, funk and groove band called Slick which regularly played the Savage Beagle in Whistler as well as the Chameleon in Vancouver.

And if you don’t remember Slick, most likely you are familiar with its bass player, Marc Rogers who has since moved on to play for The Philosopher Kings.

Even though acid jazz was popular in the clubs at the time, the jazz fusion never quite clicked, sending Stoll off on lengthy tours with K.D. Lang. Eventually the Vancouver boy found himself at home once again, more dissatisfied than ever with the usual music routine. So he began his recruit for musicians who would whole-heartedly commit to groove, and Sacred Linoleum was born.

“I wanted to reform a new band that was capable of incorporating elements of jazz and groove with musicians that actually loved playing, and listening, to circular grooves, and not just looking for a place to wank all day and night — not that there is anything wrong with that,” Stoll said.

The seven-piece band soon became eight as lineups outside of bars grew and turned the corner to a larger venue called Bar None in Yaletown. Tania Hancheoff (vocals) joined the crew with Pepe Danza (replaced Barro), Vince Mai (trumpet) and Tim Fuller (replacing Grant) following. And the band’s name was changed to Soulstream.

And then there were nine.

A year later, number 10 waltzed into Bar None exclaiming, “What the hell is a band doing playing Herbie Hancock, James Brown and Tower of Power without a baritone sax!”

Baritone sax player Bill Runge was so disgusted with the black hole in Soulstream’s sound; he sat in for free, from overture to ovation.

Runge was finally inducted into the Soulstream boat and the rest is history, almost a decade of it.

So what is it like trying to manage 10 musicians all at once?

In one word: crazy.

“For one thing, everyone listens very well (most of the time), and plays with respect towards the other musicians, picking their spots carefully,” Stoll said of working with so many cooks in the kitchen. “The approach Weather Report took serves us as a good model. In this model, there are musical passages that are understood to be more or less as written, and then there are the musical passages that lend themselves more to re-interpretation or pure invention. It’s like all 10 of us are trying to say something all night long the way we might in a duo or trio. As a matter of fact, there are many stretches where there are only three or sometimes even two or one people playing, so it works.”

Banking musicians with a long list of award-winning credits touting their musicianship also helps. As a collective, Soulstream musicians have wracked up five West Coast Musician of the Year nominations, three Juno Awards and one Grammy Award.

They’ve performed everywhere from Radio City Music Hall in New York to the Sydney Opera House in Australia. Various members have made appearances on David Letterman and Oprah Winfrey and toured and recorded with the likes of Tom Cochrane, Natalie Cole, The Rankins, Michael Jackson and INXS.

“Many of us have performed on various Juno and Grammy winning recordings,” Stoll said.

Soulstream’s most recent collective credit included recording with CBC early this week in celebration of the band’s 10 th anniversary. And the 10-piece group is making its way to Whistler to perform at ARTrageous on Thursday, Nov. 8 at the Brewhouse as part of Cornucopia celebrations.

Audiences can listen for covers such as James Brown, Herbie Hancock, Marvin Gaye, Tower of Power and Bob Marley as well as non-funk genres including Latin jazz and dance hall.

“Basically we throw a lot of ideas at each other and the ones that stick we’ll take and mold and/or remold over time,” Stoll said. “I don’t really know why certain covers work. There are a lot of personal musical criteria to be met before a piece of music becomes a part of the collective gravitational pull… Oh yeah, and if people aren’t dancing, we know we are doing something wrong.”