Director of Love in the Sixth talks about her Whistler Film Festival-bound film
Oct 28, 2015 6:00 PM By: Cathryn Atkinson 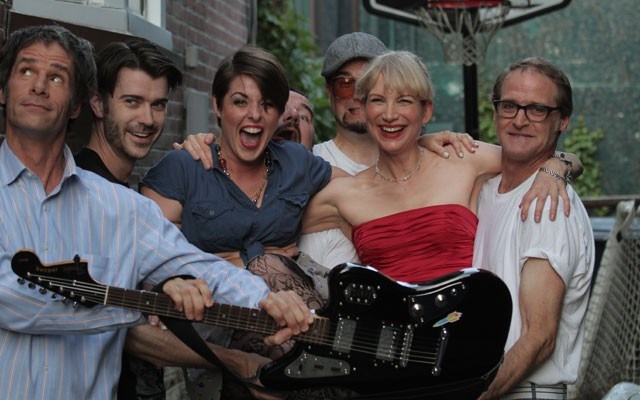 LOTS OF LOVE Jude Klassen (secod from the right) with the cast members of Love in the Sixth, which premieres at the Whistler Film Festival. Photo submitted

All in all, Love In the Sixth, a new feature-length musical from Toronto filmmaker Jude Klassen doesn't leave much out.

"Initially, it wasn't going to be a musical. It just happened organically," Klassen, who also stars in the film, says.

"I went about it in a completely different way that anyone I've spoken to. The film really reflects that."

Love In the Sixth has nine songs in all, and gets its world premiere at the Whistler Film Festival, which runs from Dec. 2 to 6.

Klassen describes it as an unromantic musical comedy.

A composer friend, Asher Ettinger, knew musicians, singers and possessed the recording equipment to make it happen and convinced Klassen to go for it.

"Asher asked me if I was going to get the actors to sing a song, and I said 'Maybe one song, that would be cool.' He wrote a song called 'Mancation' in the style of '60s girl groups and it is very catchy," Klassen recalls.

"And from there it was a case of writing more."

With acting, songwriting, journalism and comedy writing credits already to her name, working with the likes of comedians Leslie Neilsen and Jessica Holmes, the natural next step was to the director's chair.

"I would interview people about their films, which was a really great way to learn about filmmaking. I got great advice from many indie directors."

She names Canadian Ingrid Veninger, who is also showing this year at Whistler, as a particular influence.

"I was making political satire songs, filming them and directing them. One about Rob Ford went viral," Klassen says.

"I took the team I was working with on my entertainment interviews and my comedy and music videos, without any money. We just started shooting (the film). We used my house, my backyard. My daughter is in the film; she's a main character."

The idea that Love In the Sixth could be a stage musical has Klassen laughing.

"You know what? That's totally a plan! They did that with Once (first made as a film by John Carney in 2007 then crossing into theatre). I'd be very happy with a stage play," she says.

Klassen says Love In the Sixth cost around $5,000. She got a lot of help from family and friends and spent as little as possible.

"We begged, borrow and stole completely. It was unbelievable, the amount of labour that was volunteered," she says.

"I had a colourist volunteer when she saw some of the footage. I had sound people coming in at the last minute. My whole crew was friends and people I'd worked with on the magazine. I bought sound and lighting equipment."

It was filmed over a year, Klassen adds.

"At the same time we were filming, the Butler Brothers — who are indie filmmakers who will also be at Whistler — made a film for a thousand dollars that looked great. They ended up offering to edit my film after joining the team in cameo roles," she says.

"Whoever wasn't onscreen would be holding the boom. We were very resourceful."