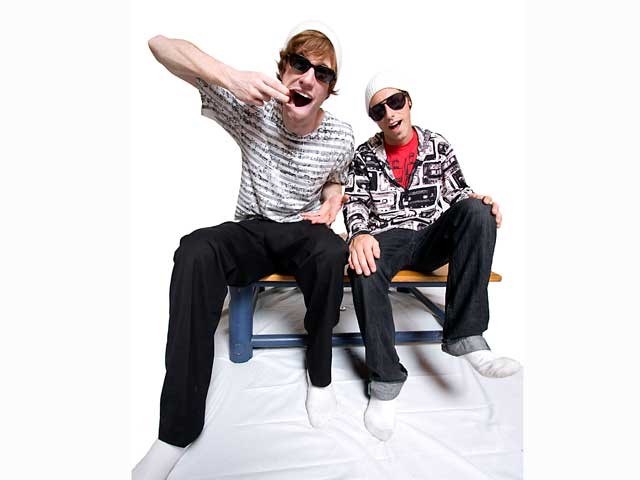 On the surface, with its mountain contemporary décor and upscale design, Whistler certainly doesn’t appear to be the most hip hop-friendly scene. But, beneath the town’s shiny, wholesome façade, it seems that the genre is growing.

They formed the group in 2004 after a disagreement between the two over the quality of another band’s performance. The group was the Terrordactyls — the name is enough to make just about anyone cringe — and Turner hated their music. Armitage disagreed. A heated argument ensued, and Animal Nation was born.

The energetic, creative duo is hesitant to label their music as hip hop, because of the plethora of bad hip hop out there giving the genre a bad name.

“I’ve been listening to tonnes of De La Soul right now,” Turner said, adding: “That’s because a lot of people will associate hip hop with being bad, but it’s still my favourite genre of music, when you get good hip hop.”

Modern hip hop generally carries a more negative message than it did in its formative years.

“Hip hop, it takes itself way too seriously now, but back in the day with the Will Smiths and the De La Soul and A Tribe Called Quest, it was just sort of a joke — they made it fun!” Turner explained.

Now, Animal Nation definitely tries to adopt the same light-hearted old school attitude in their own music, while labeling their music “intellectual” hip hop, with reference to their thoughtful lyrical content.

And their musical influences vary pretty dramatically, from underground hip hop, like One Below and Atmosphere, to mainstream rock classics like the Rolling Stones, Modest Mouse, and Beck.

The duo just finished touring 13 cities in three weeks with Jiminy, a six-piece funk, pop and soul group based out of Saskatchewan.

“It was so much fun — it was unbelievable!” said Turner. “I’d never been to the prairies before, so it was really cool to go there. I didn’t know what to expect, going there, and it was awesome.”

They certainly weren’t expecting to find a large hip-hop-loving contingent, and were pleasantly surprised by the open-minded attitude towards music they encountered along the way.

“Everyone’s into all sorts of music, and every girl was incredibly beautiful over there,” Turner added with a laugh.

They were invited to take part in the entertainment programming for Crankworx this summer, but were busy touring at the time.

Turner said Whistler is actually a great place to make music, because a new audience is constantly coming into town.

“We attract a lot of people that aren’t necessarily strictly into hip hop, and it’s also good because of traffic flow that comes through here,” he explained. “People will come intermingle, then go home the next year and tell all their friends, so that works out well, as well.”

These local boys also had the chance to pick up their mics during Pemberton Festival this past summer, an experience Turner said was simply amazing.

“It was great for everyone that went, and I think everyone had a good time,” Turner said. “They hooked all the artists up with huge privileges that we didn’t really need or expect, so it made everyone happy.”

He added that the massive event also helped to put Pemberton on the map, and was a great opportunity to showcase local talent to a huge crowd.

There was a two-year gap between their first two albums, Selfless Mind Indulgence and Time Zone , and the duo is well on track to releasing their second full-length album, which features another well-known local performer, Ali Milner, on one of the tracks.

“This one came off as really personal, I think,” Turner said. “The lyrics are actually way better on this one, and the same with the production as well as the recording — it’s a lot crisper.”

They’re hoping to release the finished product in the New Year, but right now, they’re getting ready for a new mini-tour, heading to Vancouver, Bellingham, Burlington, and then back up to Whistler for a show on Sunday, Oct. 12, opening for Camp Lo and Ra the Rugged Man at Garfinkel’s.