Hook N Sling takes house to a new level with innovative, blended breakbeats and more
Dec 5, 2008 7:27 AM By: Holly Fraughton 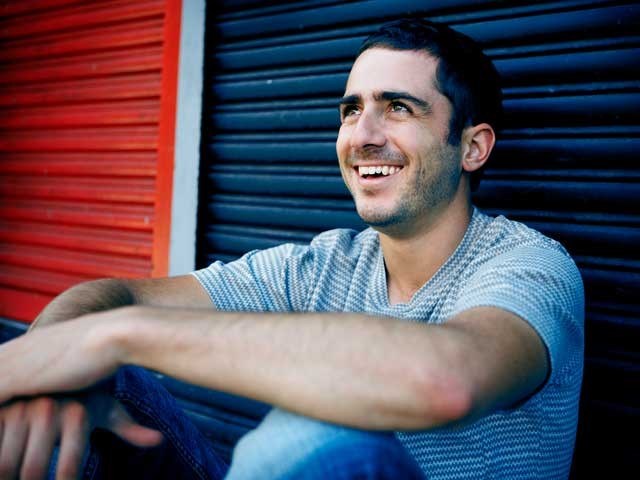 On Tuesday evening, Anthony Maniscalco, better known to fans as Hook N Sling, was getting ready to jet off to a gig with Red Bull on the Gold Coast of Australia.

This breakbeat producer and DJ still calls Sydney, Australia home, though he’s been spending plenty of time in the skies lately, going to and from shows across the country and over to North America.

But this jet-setting breakbeat DJ and producer wasn’t always on the musical track. Rather, the original plan was graphic design – at least, that’s what he studied in university.

“I was quite creative in school – I did a lot of art, a lot of drawing and painting and stuff,” he said, “… But then, it was just too boring, I suppose!”

Maniscalco was first introduced to the world of house music through parties.

“We had this big show house on the beach, and we used to have people over all the time and all of my friends were into electronic music… One of my friends, James, just bought a pair of turntables and we all just kind of took them off him, and he never got them back!” he recalled with a laugh.

They began using the equipment at house parties, and at one such event Maniscalco found he couldn’t seem to pull himself away from the turntables.

Moving from the visually creative world into the musical realm seemed to be a pretty smooth transition for Maniscalco.

“I knew there was something there,” he explained, “It was just one of those things where a hobby turned into a job.”

The name Hook N Sling actually came from an old, rare groove song from the late ‘60s that Maniscalco used to sample when he first got into producing.

“I was sort of incorporating the beats from that track into my own music, so I thought once I got my own productions up and happening, then I’d credit where it all came from I suppose,” he added.

His work as a DJ eventually led to production. Perhaps because of his background as a graphic designer, Maniscalco was perfectly comfortable working with computers. He caught on pretty quickly.

“I knew computers pretty well, and when I was DJing quite a bit, and it started picking up, I started doing some re-edits,” he said.

He started out with a simple home setup on his iMac, and found himself spending endless hours producing in his bedroom. Now, he has a full home studio using Ableton Live, analog pins and loads of hardware.

Now, he finds his time is split pretty evenly between touring and production.

“I pretty much go through stages of one or the other,” he said. “I always have a time where there’s a lot of production work to be done, like remixes, and I’m in the studio like five days a week, so after I finish big stints in the studio, I really enjoy just getting on the road and touring.”

This spring Maniscalco mixed a gold-selling 17-track compilation for Ministry of Sound, “The Clubbers Guide to 2008.”

“Basically, it was my first comp for Ministry, which was really exciting, and they wanted me to put my sound into a mix CD,” Maniscalco explained.

Afterwards, he toured on that project for about three months alongside Sam Lamont, who created the other album on the two-disc compilation. The reaction from audiences was overwhelmingly positive.

“It’s really good actually when you tour a CD because people actually know the music before you hit the road,” he explained. “…It was my first Ministry tour and we went far and wide. We did like 25 shows in about three months. It was nuts!”

Though it’s great to see audiences react positively to new material, Maniscalco said its still great when someone requests one of his older hits, like his remix of Sarah McLeod’s, “He Doesn’t Love You.”

“Obviously, as time goes by, I don’t get requests as much for the older stuff, but I get a bit of a warm, fuzzy feeling when they do ask for it,” he said.

In fact, during his Canadian tour last year, someone wrote, “Can you play Sarah McLeod, or is that too last year?” on one of his posters. That poster is up on his wall.

“When I was a kid, I remember that song on TV and I kind of came across it just through listening to my CD collection… and I was really excited about it,” he said, “It was almost something I had forgotten about. I knew straight away that it was something that would work.”

Over the past year, Maniscalco has played some massive gigs, including a particularly memorable show in Ibiza and the Global Gathering Tour.

In Canada, though, Whistler is definitely one of his favourite spots to visit and perform. In fact, his upcoming performance at Tommy Africa’s will mark his third trip to town.

He’s coming here as part of a quick tour of Western Canada to roadtest some new material before he heads home to play massive summer gigs and get back into the studio.