Weekly pottery sessions an affordable way to flex your creative muscles
Oct 3, 2008 7:35 AM By: Holly Fraughton 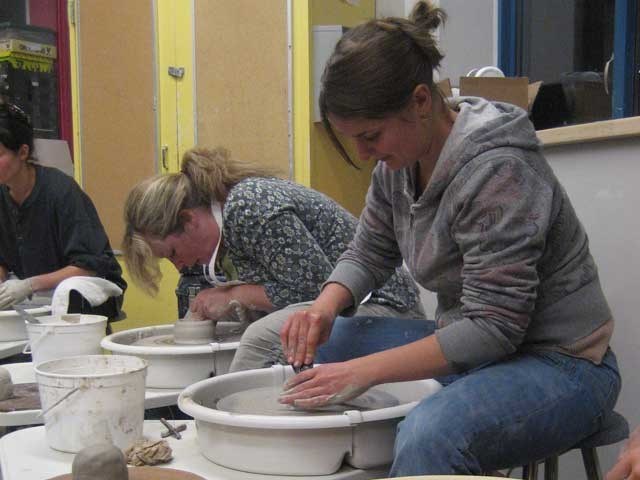 Wheel Work Participants get their hands dirty at the wheel during the Whistler Pottery Club's drop-in session. Photo by Holly Fraughton

Clay caked fingers fly up to a furrowed brow, streaking a forehead with a fine, dusty smudge. Conversation murmurs above the sound of the whirring of the wheel, and the occasional laugh escapes the lips of one of the aspiring artists gathered in Whistler Secondary School’s art room. This is Whistler Pottery Club’s drop-in night.

Laurie MacCallum is a member of the club, helping to coordinate and supervise the weekly drop-in sessions. She bounces from table to table throughout the course of the evening, checking on the progress of each of the participants, and demonstrating different techniques.

“The idea is that people come in and they just are sort of self-directed,” MacCallum explained in an interview last week, when things were a bit quieter. “That would be sort of the ideal.”

But she quickly added that members of the pottery club are usually more than willing to offer tips and tricks to those just getting started.

“If people are just getting back into it or if they’ve done it a little bit, and they just want to experiment, they can use everything here, basically,” MacCallum said.

Denise Hughes is also a member of the Whistler Pottery Club, and has been participating in the art night since 2000. She explained that the night originally started out at Myrtle Philip School, and moved to the high school when it was built.

Now, the art night has been around for almost 15 years, transforming and transferring hands between local potters a number of times.

The support of the municipality has certainly helped keep the evening affordable.

“Really, it’s the only way that we could do it. For us to be able to rent out this space, well, we wouldn’t be able to do it, so the muni has really stepped up and really supported that,” MacCallum said.

It costs only $9 to participate in the drop-in, plus another $10 for a big bag of clay, and the pieces are glazed and fired for free. The club also has a large collection of tools, molds and stencils available to help inspire and create unique pieces.

“It’s a cheap drop-in,” MacCallum pointed out. “Cheaper than a movie, right?”

They see people of all ages, backgrounds and levels of experience show up to get their hands dirty and play around in clay.

“It’s great, and the thing is that the facilities here are awesome! We’ve got five wheels, we’ve got the two kilns,” MacCallum said, pointing around the room as she deftly shaped small balls of clay.

“We just had a group of girls come in,” MacCallum said with a smile, adding that the energetic group completely took over the space.

“One of them was really hardcore serious,” MacCallum said.

“She was the driving force there,” Hughes chimed in, and both began to laugh.

Though the group has traditionally worked with earthenware clays, they’ve just started experimenting with stoneware materials, and have even begun expanding their firing techniques.

Earlier this year, they received a grant from the Whistler Arts Council, which enabled them to try a raku firing under the supervision of Kay Austen, a renowned Canadian potter who lives in Squamish.

“It went well. The result was we got a kiln out of it and we’ve got people now that have experience with raku firings, so we’re going to try and get some other… (firings) going, because I think people are pretty keen right now,” MacCallum added.

Now, they’re tinkering with some new ideas, like a clay day, where they would invite the public to come out and get their hands dirty, playing with clay. They are also hoping to get a well-known local potter, Vincent Massey, to come in and give a demonstration one evening.

MacCallum encourages people who are interested in participating to just stop by on a Tuesday evening to check out the space and meet members of the club.

Hughes points out that a lot of people who are new to town may not know where the high school is — so, for those of you who haven’t made the journey to Whistler’s hallowed halls of learning, yet, just hang a right off Highway 99 across from Alpine Meadows.

“So if people want to just come check it out and meet us one week, and then decide whether they want to come in or not, that’s good,” MacCallum said.

The RMOW also recently launched a new beginners pottery class as part of their 2008-09 fall and winter programming, teaching basic techniques like pinch pot, coil building, slab and beginner’s throwing. Members of the Whistler Pottery Club provide instruction for the classes, which run each Wednesday night from Sept. 24 to Oct. 29 and Jan. 21 to Feb. 25. The cost is $147 for six sessions.

“Those are basically, to get people to the point where they can just come in and slide into the studio nights,” MacCallum said, explaining that on busier studio nights, it can be hard for the pottery club members to get around to help everyone.

The classes were supposed to start last week, but only two people had registered the day before the classes had started.

“I have a feeling that now, it’s kind of a scramble and people are just trying to get settled,” MacCallum rationalized, adding that they’re hoping people start to show some interest a little later in the season.

“We’ve been sort of able to hang on as a group, and every fall it’s sort of another struggle to get people coming in again,” MacCallum said.

But they really would like to see the night grow.

“The more people we have coming in, the more raku firings we can do, the more workshops we can have.”