Record is being mixed in the legendary Rolling Stones Mobile Studio
Jul 14, 2019 2:00 AM By: Brandon Barrett 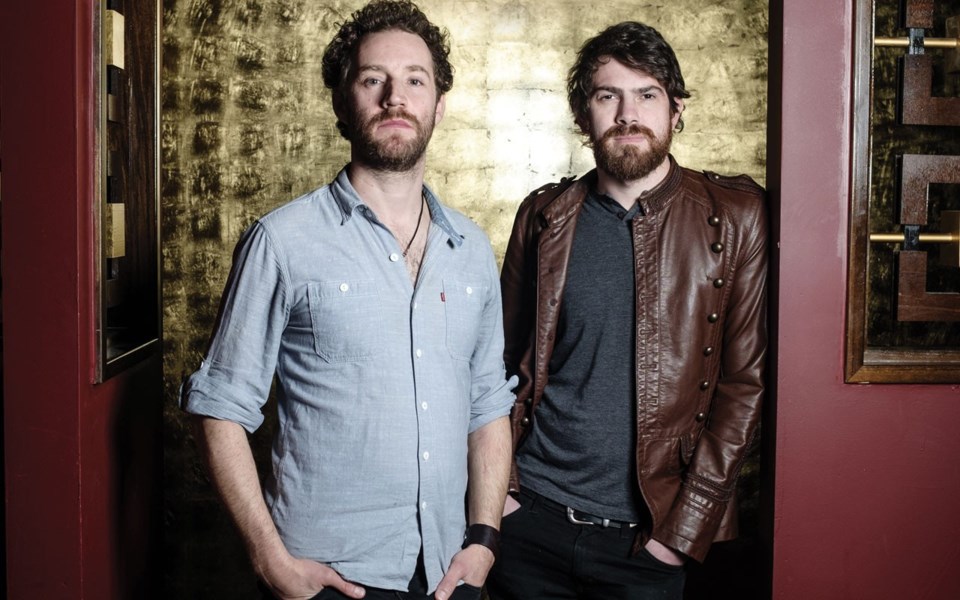 While mixing their upcoming live album, Vancouver blues duo The Harpoonist & The Axe Murderer set foot in what is probably the most historic mobile recording studio in rock history: The Rolling Stones’ ‘Mighty Mobile.’ Photo by Jodie Ponto

The Harpoonist & The Axe Murderer aren't afraid of the rough edges of rock. And in an age when the bulk of artists are moving further towards the polished gloss of digital sound, the Vancouver blues duo are increasingly becoming the exception, rather than the rule.

"There is this lack of confidence that has come from two generations worth of recording on computers, where your take is never the definitive take because you can always be on the defence, you can always have 20 takes of a particular thing, whether it's guitar or vocals or mandolin or whatever the heck you're working on," says vocalist and harmonica player Shawn "The Harpoonist" Hall.

"[The flaws in music] get buffed out or undervalued because of this culture of accessibility," he says.

"That's why I'm here, man. That's why we came back to the scene of the crime."

In this instance, the crimes Hall is referring to are nothing less than some of the most iconic, boundary-pushing recordings in the history of modern music. You see, Hall is speaking with Pique from Calgary's National Music Centre (NMC), which is now home to The Rolling Stones Mobile Studio, a legendary studio on wheels where dozens of classic tunes were recorded by both the Stones and other '70s-era icons.

As luck would have it, The Harpoonist & The Axe Murderer are mixing their upcoming record, tentatively titled Live at The Eddy, at the studio following the band's three-day stint earlier this year at storied Calgary venue, The King Eddy.

"Oh god, it's been a dream come true," says Hall. "It's really an incredible opportunity that Western Canada, and Calgary of all places, houses the most legendary live recording truck in the history of rock n' roll. Really, we feel pretty honoured because I think we're probably one of the first bands in Canada, if not the first, to get to make a live record in this thing.

"Honestly, it's the greatest creative storm that I've experienced in my life."

The Stones' tour manager first thought up the concept for the studio, or "Mighty Mobile," as it was called, in 1968 as a way for the band to record wherever, whenever they wanted. The world's first professional mobile studio, over the years it churned out timeless record after timeless record: the Stones' 1971 classic Sticky Fingers, Led Zeppelin's Physical Graffiti and The Who's Who's Next, among others. It even bounced around the New York punk scene in the '90s after being sold at auction and added recordings by Patti Smith and The Ramones to its illustrious history.

Restored by the NMC in 2015, the studio is flush with what Hall called "funky, funky, funky old gear" that plays directly to The Harpoonist & Axe Murderer's ragged ethos. There are four different tape machines running at one time, a '60s-standard Echoplex tape delay effect, and an old Trident A-Range board, a multi-track console that was revolutionary for its time and requires, these days at least, a specialized hand to ensure it stays in working order.

"[It is] a 48-channel console that requires a technician to maintain and fix it and pull out cards and re-tweak things. Honestly, the engineer has gone underneath the board like it's an Indy car four or five times," Hall says. "It's stuff that's so much more exciting and thrilling than a plug-in."

For a band that so clearly pays deference to the vaunted traditions of blues, The Harpoonist & The Axe Murderer have still managed to push the notoriously rigid genre forward by, well, not sticking to strict genre conventions.

"I'm not trying to say all blues is conservative, but anyone who knows anything about blues communities knows that they stick to and honour their traditions," Hall says. "I know what I would love to see change is people's black and white view of these genres. I would love to see things being more openly and broadly musical and less categorized. I think the categorization tends to limit our creative imagination of where we can go."

The Harpoonist & The Axe Murderer play a free show at Olympic Plaza on Friday, July 19 at 7:30 p.m. as part of the Whistler Presents Outdoor Summer Concert Series.