Experiencing the cross-cultural fusion of Delhi 2 Dublin
Oct 3, 2008 8:17 AM By: Holly Fraughton 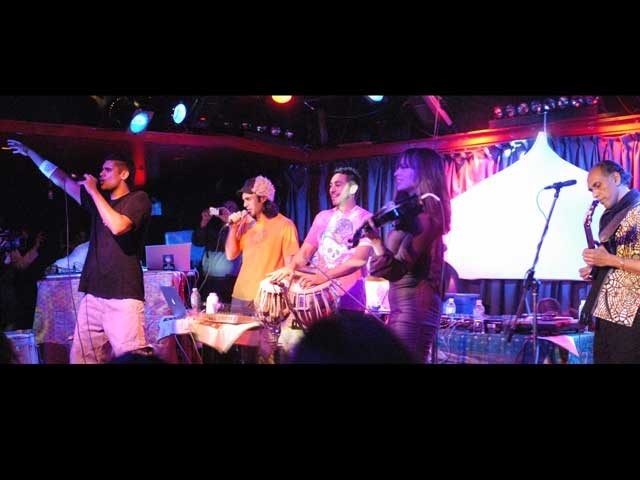 At first glance, Indian and Celtic music go together about as well as curry and a pint of Guinness, right? Wrong.

The electro-acoustic collaboration between five world fusion artists, known as Delhi 2 Dublin, has proven that the traditional sounds of North India and Ireland can be combined, with the help of some serious dance rhythms.

As their name suggests, the band’s music is a blend of a few different cultural influences.

Kytami wields the violin, or in this case, the fiddle, for Delhi 2 Dublin. A classically-trained violinist, she’s played in numerous genres of music — hip hop, live electronica, dub, dancehall, drum ’n’ bass, metal, punk and others. Ravi Binning, the dhol player, has a strong Bhangra background, bringing Punjab beats to the dance floor. Andrew Kim, a multi-instrumentalist, has studied music from around the world and now performs on numerous ethnic instruments including Indian sitar and guitar, while Sanjay Seran, their vocalist, grew up listening to everything from hip hop and new wave to UK Bhangra. And Tarun Nayar, who is of Punjabi and Irish descent, is a classically trained tabla player, DJ, and producer known for his fusion of traditional Asian sounds and electronic beats.

Kim, the sitar and guitar player, spends a lot of time in India studying traditional music.

“He’s a Korean dude,” Nayar said with a laugh, adding that Kytami is Japanese and Filipino. “So it’s really like a cultural mash-up, for sure… Some people say that it’s very Canadian, and I guess it is.”

Each of their individual cultural and ethnic backgrounds works to inform and transform their sound.

“The music we grew up listening (to) has coloured, probably, the way that we see music today,” he said. Kim grew up studying Indian classical music, which has gone on to influence his current musical identity.

“The interesting thing that happens when we all get together is that we don’t really sit down to try and make fusion music… we just try to make music that will make people really happy and bouncy and dance on the dance floor.”

Each member of the band is also into electronic dance music, a fact that really shines through in their intense, high-energy live shows.

“We did this show in San Francisco last weekend, and someone was blogging about us and they were like, ‘I always knew there was something about Irish people and Punjabi people, and it’s so good to know that it’s not just alcoholism,’” Nayar quipped with a laugh. “They’re both cultures that really love to party.”

The group released their first self-titled full-length CD in December, and now they’re getting ready to master their remixed CD, with the idea that it will be released in a few weeks time.

“We definitely wanted to make friendly on the ears, so people could pop it in their CD players, so its not as ridiculously bangy as our live show is,” he said.

This weekend, Delhi 2 Dublin will perform in Whistler for the first time, though Kytami has some roots in the community.

Nayar accidentally launched Delhi 2 Dublin back in early 2006 through his work with the Vancouver-based DJ collective, Beats Without Borders.

Celtic Festival had approached Beats Without Borders to get their help reaching out to a younger crowd through music for an upcoming party.

“The DJs in the collective, we all started looking for Celtic music that we could play — like electronic Celtic music — and it basically didn’t exist,” Nayar explained.

So Nayar and another DJ, Adrian Blackhurst, met up with Kytami to provide the Irish side of things. The day before the show, Nayar called on Seran to supply some Punjabi-style vocals over the Internet.

The computerized fusion sounded incredible, so Nayar invited Seran to come perform, last minute, without a rehearsal, for the 300-person crowd at the Plaza in Vancouver.

“Kytami was going off on her fiddle and people were totally feeling it, and when Sanjay (Seran) got on stage, even before he said anything, people just went bonkers,” Nayar recalled. “…Sometimes, in music, there’s this magic that happens and it’s such a special feeling, I don’t think any of us three will ever forget it.”

Typical musicians, the three agreed the performance was great, and walked away without making plans to take their sound to the next level.

“Then we started getting booked… and before we knew it, we’d been booked to play on Canada Day on Parliament Hill, before we had a CD or even a real website or anything, so it’s sort of taken on a life of its own,” Nayar said.

Since then, they’ve been in high demand, invited to take part in some big West Coast festivals, like the Vancouver Folk Music Festival, and the Canada Day celebration on Parliament Hill.

“It was ridiculous. There were 40,000 people there. It was almost overwhelming, but super, super fun,” Nayar said. “Not that I’m a big fan of Stephen Harper, after he cut $(45) million to the arts, but we got to play basically right after his speech.”

Delhi 2 Dublin’s music incorporates the turntables, tabla, dohl, fiddle and sitar — certainly a wide range of instruments, which at first glace, aren’t exactly a logical fit. But apparently, there are some historical roots between Indian and Celtic music.

“For some reason, people say there’s a connection there, between the actual music,” Nayar explained. “Supposedly, the Celts descended from a tribe that traveled from North India through the Middle East, up to Eastern Europe and then finally into Ireland.”

On a practical level, Nayar said that both types of music have a similar feeling and scales.

Traditional Indian and Celtic musicians seem to be surprised by the music of Delhi 2 Dublin, at first, but perhaps because all of the members are classically trained in their respective genres, they haven’t had any complaints that the authentic roots aren’t being represented.

“Everyone’s always like, ‘wow, I never thought that it would work with Celtic music,’” Nayar said.

“It’s funny — in the Bhangra scene out here, like the Punjabi music scene, usually people are fairly close-minded to fusion. They don’t like mixing — they like their Bhangra straight. But for some reason, it’s been accepted by the Indian community.”

Nayar believes their electronica influences help them appeal to younger audiences, and lead to one hell of an energetic show.

“Adding in beats works wonders,” he said. “You can get on stage with all these traditional instruments, and a kid is not going to listen to it. But we have kids who are fans, which is really amazing. Thirteen year-old girls who are fans, and if we didn’t have beats involved in the music, I know that that would not be happening.”