The lovely return of Loverboy 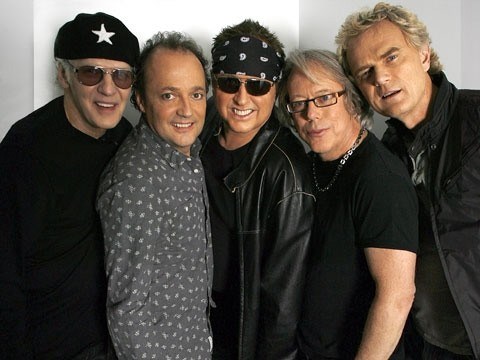 "Hi there, I'm Mike Reno. We're here shooting a show for, uh, Health Nutz. I think it's in studio or Stage Three. Is there some place you'd like me to park?"

There's some fuzzy mumbling over the intercom as security personnel investigates where Reno is supposed to park for the Vancouver based film recording.

Reno then says to me, "I'm kind of an actor. I've never been an actor but I'm going to give it the ol' college try."

TV's just part of it - Reno's had plenty of opportunity lately. He now co-hosts The Bro Jake Show on Rock 101, one of Vancouver's most popular morning radio shows. And with the popular revival of his band, '80s hit makers Loverboy, he's been playing shows across the continent.

Not bad for a band that went out of style nearly two decades ago. Rarely do bands fall out of fashion only to remerge. It happened with the Beatles, with Elvis, with Journey. And now it's happening, for whatever reason, with Loverboy.

"It was one of those kinds of deals where I woke up one day and I was famous again," Reno says.

He's quick to point out, however, that Loverboy's not "back" - they never actually went anywhere. Despite a few hiatuses in their career, Loverboy has been touring and playing shows every year for the past 30.

"Maybe you forgot about us, or your brothers forgot about us, but we never stopped touring. I don't want to stop anybody's bubble, like, 'Oh, we're back?' We're actually just back in fashion," he says.

Loverboy is perhaps best known for their early 80s hits "Turn Me Loose" and "Working For the Weekend," which have become hallmarks of the decade. Their 1981 album Get Lucky was a smash hit in the U.S. and Canada. Driven by the strength of "Working for the Weekend," the album hit number seven on the Billboard 200 album chart, back when that actually meant something. "Turn Me Loose" was on of the first videos to have heavy rotation on MTV, back when MTV still played videos. Get Lucky earned them six JUNO Awards in 1981 - a record that has yet to be broken. Their albums went platinum several times over. Loverboy sold out arenas. They toured the world in their own private jet and played alongside their idols. For a while there, they bloody well ruled.

"We lived in this great, beautiful era," Reno says. "People bought music, they paid for it. They went to concerts, they bought t-shirts and they allowed us to go and do another project because they put a little more money in the kitty for recording. It was great."

Reno's red leather pants, the band's squalling, '80s riffage, the cheesy synths and, of course, the songs helped to defined the aesthetic, style and sound of the 1980s. Loverboy was of their era, and because of this, the band has been fodder for comedy programs.

On Saturday Night Live, Chris Farley and Patrick Swayze famously auditioned as Chippendale dancers to "Working for the Weekend" on Saturday Night Live. An early South Park episode made a reference to a fictional Loverboy song, "Pig and Elephant DNA Just Won't Splice." More recently, Pete Hornberger on 30 Rock claimed he was the original bassist for Loverboy before leaving the band for a college scholarship in "TV Budgeting."

"We're the brunt of a lot of jokes and I love it," Reno says. "It's kind of like any press is good press. I've (done) enough. I could quit today. I've done ten times more than I thought I would ever do and seen some amazing things, so it's all kind of gravy for me."

By the early '90s, a decade after first hitting it big, their career stalled. Hair metal slowly edged them off the airwaves, and then grunge booted them off for good. Reno told an interview in the late '90s, "Nirvana killed our career."

"I've met Dave (Grohl, ex-Nirvana drummer) over the years," he says now. "He just laughs and says, 'Dude when you said Nirvana killed my career, man, I nearly pissed my pants.' And it was true. These guys just came in and we were history."

By the mid-'90s, Loverboy's brand of arena rock was unwanted by their label. They released one album of original material in 1997, Six , to little fanfare.

But Loverboy is the posterband for persistence. They toured frequently, playing much smaller venues than in their heyday. In November 2000, original bassist Scott Smith was declared dead after being lost at sea, which resulted in another round of touring, dedicated to Smith. In 2005, the band commemorated their 25 th anniversary by playing selected cities across North America. And, from there, the resurgence began. The energy resulted in another album of originals, 2007's wryly-titled Just Getting Started . In 2009, they were inducted into the Canadian Hall of Fame.

They were playing more frequently, in bigger venues. Reno started noticing that young people were almost outnumbering "the old farts" at all their shows.

"People will be dressed up like us, they'll have headbands on like the old videos. I think they watch them on YouTube and then they come out because they like the positive lyrics and they like the energy of the songs," he says.

And Loverboy, it seems, might only get bigger. Both Reno and their manager have said something "huge" is coming down the pipe for 2012, though both are keeping mum about it

"It's just basically a tour with another classic rock band that's huge. We toured together in '82, that's a hint, and it looks like it could be a full-on retro tour of the United States - the big rinks and the outdoor venues," he says.

As for a new album, Reno says he's not sure if it's worth spending the big bucks on recording one, just for people to rip it off the Internet for free. Loverboy recently released a brand new song; "Heartbreaker" - a roaring Bob rock-produced track that encapsulates their newfound, if middle-aged, energy - and they have several more songs in the can. They just don't know what to do with them.

"The few fans that will buy (a new album), you can thank them but it won't pay for the recording costs, so you're losing money. I don't even know what to do, I'm kind of stuck," he says.

For now, he's happy just to ride out this new (and somewhat surprising) peak in popularity. He'll do his classic rock radio show, play his classic rock on stage, do the odd TV gig. Like he says, "It's all gravy."

"If they told me tomorrow that there's no way I could do any more concerts, it's all over, it wouldn't kill me," he says.

Only 1,000 tickets have been put on sale for the show. They can be purchased at Millennium Place for $10. Proceeds will go to support Whistler Food Bank