The many faces of Moka Only

A versatile Canadian artist’s journey through the hip hop industry
Nov 14, 2008 7:55 AM By: Holly Fraughton 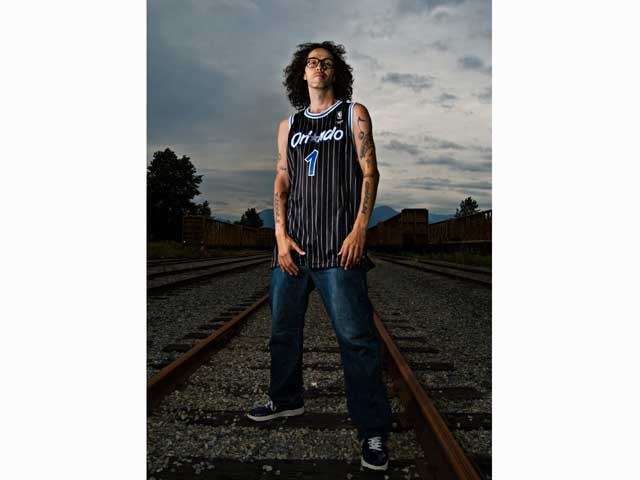 Moka, Only? Moka Only is set to take the stage at the Beagle this weekend, alongside Canadian hip hop artists D-Sisive, DJ Law and Manafest

Admission: $6 in advance at Billabong and The Circle

Moka Only’s real name is Daniel Denton, but he can’t seem to shake his nickname – it’s stuck for about 18 years now.

Over his years in the Canadian hip hop industry you’ve probably heard music produced under many other names. He’s worked under the aliases of Flow Torch, The Martian, Durable Mammal, and Ron Contour, just to name a few of the musical personalities of this multitalented MC and producer.

“In hip hop, it seems there are boundaries and people get all wimpy and silly when you cross the boundaries,” he explained. “I think the bottom line is, a creative challenge is always a good thing, and it’s fun doing other characters and coming from other angles.”

On Tuesday morning, Moka had just returned from the U.S. leg of his most recent tour, and was up until 8 in the morning working. But an all-night session of writing and recording is pretty much the norm for this artist.

He plans to spend the next three days wrapping up his annual Christmas album – one of his many side projects – before he heads back out on tour, making his way to Whistler this weekend for a show at the Savage Beagle, where he’ll be performing alongside D-Sisive, a Toronto-based rap artist, and DJ Law, another Toronto based hip hop turntablist.

“That’s what I like, right. I don’t really have a social life or anything else like that. I’m just a music nerd,” he said.

Originally from Langford, just 15 minutes north of Victoria, Moka didn’t exactly grow up in a hotbed of hip hop culture. Instead, he was introduced to the multifaceted scene through the vibrant graffiti art and music through mainstream media.

“Graffiti can exist on its own fine without the rest of hip hop, and always did. It’s its own thing. And I was always an artist as a child, and it just appealed to me,” he said, adding that he amalgamated the visual representations with other aspects of hip hop.

“It was so left-field from what I was used to in my surroundings and as a young black kid, it was something new to connect with that wasn’t the mainstream status quo,” he explained.

Despite its initial exotic appeal, Moka instantly found a familiar feel within the scene. Within a year, he was heading to Vancouver, then San Diego, with a good friend, Prevail, to explore the world of hip hop further.

“It was just me and him back then, doing our music thing together, and I don’t really remember what it was. It was like, ‘hey, lets just go. An adventure!’ So we got a backpack on and with a hundred bucks to our name, just went,” he recalled.

The journey paid off – they made “miraculous” connections within the close-knit local hip hop scene, with representatives from the infamous Rock Steady Crew taking the two under their wing.

Moka is also widely recognized for his work with the group Swollen Members which started off as another side project for the independent artist and the other members, Prevail and Mad Child, and took on a life of its own. He eventually decided to break off on his own again to focus on his solo projects.

Though he’s known for a commanding onstage presence, Moka’s true passion, and priority, lies within his production work.

“Production comes first, to me – that’s where I get the mood off of. I can write outside of it. But I love sitting and making a groove and letting that dictate where I’m going to go,” he explained, “letting it actually be the meter that sets the motion.”

Now, vocals are more of an afterthought for him – “the icing on the cake.”

“I like to delve in the absurd,” he said, adding that his musical influences range from Frank Zappa and the art rock of Deerhoof to De La Soul, as he flipped through a nearby stack of CDs.

“To me, its kind of embarrassing when the media thinks that hip hop is one-dimensional, and just beats and rap and nothing else. It’s not like that – the majority of the people that I know that rap don’t listen to rap.”

He’s been making music since the ‘80s, and getting to where he’s at today wasn’t an easy journey – it wasn’t even a steady climb.

“We went through a lot of very, very trying times and did things that weren’t being done, and now I see them being done. Like, even as far as back in the day, we couldn’t get a record deal to save our lives, so we just dubbed up our own tapes and sold them on the street. I didn’t see anyone else in the area doing that. Now, its common practice.”

The industry finally caught on, honouring Moka and company with three Juno awards and seven Much Music Video Awards over the years.

“Who knows,” Moka said with a yawn, adding, “I’m grateful for that, but I don’t measure my life by a statue.”