The many pedigrees of International Guitar Night 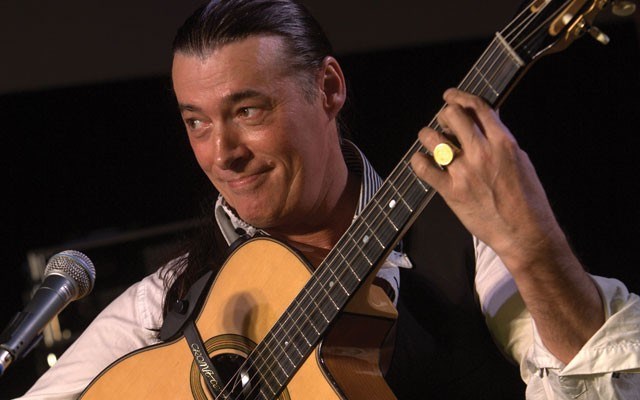 International Guitar Night, an annual event in Whistler, is this year looking to masters from three continents.

It is led this year by Lulo Reinhardt, the grandnephew of legendary Belgian gypsy jazz performer Django Reinhardt, who is a third generation guitar master from that family. He is based in Germany.

He started learning from his father at the age of five; by 12 he was playing professionally in the Mike Reinhardt Sextett. He describes being a tiny child, recalling "a guitar in every corner of every room."

Over the years, he moved on from gypsy jazz, evolving his style into Latin swing, now playing and leading the Latin Swing Project. He considers himself a band player, but is happy to step into a soloist's shoes.

He has stepped in to run this year's International Guitar Night (IGN) tour from founder Brian Gore, who is on hiatus. This is Reinhardt's fourth tour with IGN, his first tour in 2009. He came to Whistler in 2016.

"I'm good friends with Brian and that is the main thing that keeps bringing me back," Reinhardt says.

"He knew that I know how it works. I'm on tour a lot and have my own guitar festival in Germany, which is also international. So for me it is an honour to play with the IGN again — I like touring."

Whistler is one of 27 stops on IGN's itinerary. The sold-out show takes place at the Maury Young Arts Centre on Thursday, Jan. 26, at 8 p.m. It is part of the Arts Whistler Live! program.

What draws people to IGN is the opportunity to see four virtuosos from very different guitar traditions performing separately and together.

"I like to bring different cultures together," Reinhardt says.

The three guitarists are from very differing traditions.

Italian Luca Stricagnoli, the youngest of the bunch at 25, is known for his depth of expression, altered tuning and right-hand fretting, says Reinhardt. This tour is his North American debut.

"He is the first of our performers to play with three guitars on stage. It is part of his show and fun. He is a funny, funny boy. Really nice," Reinhardt says.

Chrystian Dozza is an instrumentalist and composer who has won at least seven guitar and composing competitions in Brazil — he is considered part of a new wave of Brazilian instrumentalists. He, too, is making his North American debut.

Indian slide guitarist Debashish Bhattacharya learned classical Indian guitar style from the father of the genre Brij Bhushan. Also a student of the sitar, his style is to play the guitar across his lap while seated cross-legged.

Reinhardt is a particular fan of Bhattacharya's playing.

"It was always a dream for me to play with an Indian guy, because I'm a gypsy and gypsies came originally from India, 1,100 years ago. And Debashish says it is amazing for him to play with a gypsy, because we have similar styles," Reinhardt says.

"What we have that is similar comes from inside us. When we play together it is like one person, so much of the same tradition inside. He is playing original Indian music and I play my gypsy swing style."

Reinhardt says Whistler can expect music from each guitarist and then a grand performance together.

"In the second half we play duos and as a quartet again. The good thing is that there is something for everyone. Every single style. People will see how we work together."

The tour started off a little more interesting for the players than is usual because they had no time to practice before hitting the stage in Fort Saskatchewan, Alta., on Jan. 19 — thanks to Canadian visa problems for both Reinhardt and Dozza.

"I couldn't fly because they have new rules. If you fly from outside you need a visa and you have to go online. Luca and Debashish got it in 10 minutes," Reinhardt says.

But his application was rejected because the application was in German and time ran out. He flew to the U.S. on Monday, Jan. 16 and drove into Canada, still waiting for full approval.

"I just played the second set on the first night. That is when I arrived. Luckily, we all knew the music. And Chrystian arrived just last night — straight from the airport to the gig," Reinhardt says.

"We've never had this before."