The Meeks Duo brings four hands to one piano 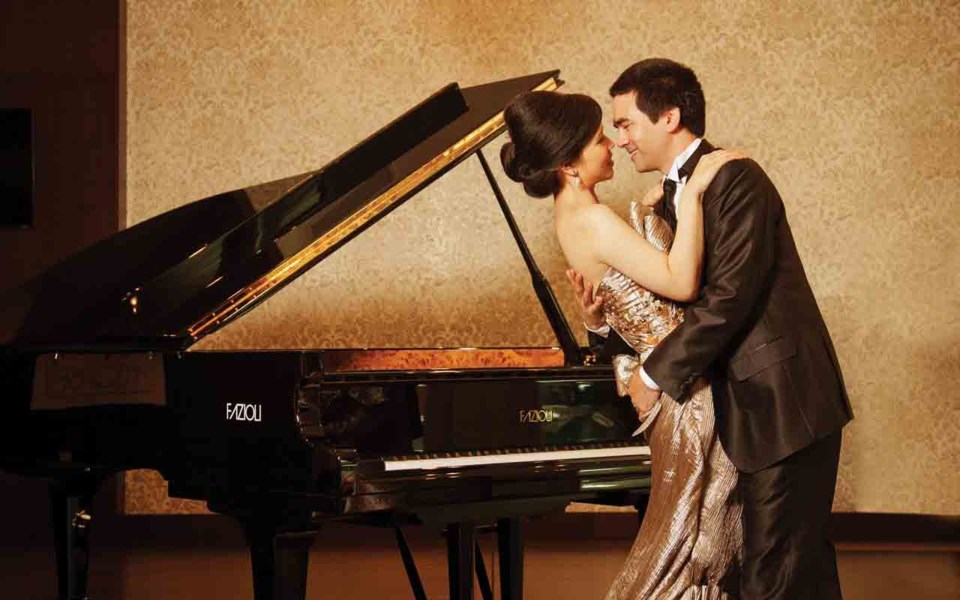 These days, cellphones are routinely blamed for distracting people from building and maintaining in-person relationships.

But for Scott Meek and Clare Yuan, their iPhones are — at least, in part — the reason they're married.

Years earlier, Yuan had hired Meek to accompany her for a musical project. "It was like any business relationship, then we didn't keep in contact for almost two years," she says.

Enter technology — more specifically, an iPhone game called "Draw Something," in which one person draws a picture using words from another person. "I was looking for someone to play draw something with and I saw his name," she says.

The rest, as they say, is history.

After they got married in 2013, the pair decided to merge their musical talents and form The Meeks Duo, in which they put four hands to one piano and perform duets spanning various genres. "Now, we have about five or six hours of stuff we've accumulated," Meek says.

With 88 keys and four hands, you might have guessed that it's not only the music that requires practice, but also the choreography of hands too. "We do try to figure out the hand positions so my right hand isn't bumping into his left hand," Yuan says. "We have to figure out whose hand goes on the top and bottom in rehearsal, so we always know which hands are running into which to avoid that."

Being a married couple, and the intimacy that accompanies it, has helped them master the technique. "The question we get asked most often is, 'How is it working as a couple?' If we fight, or elbow each other," Yuan says with a laugh. "Before we started playing together, after we got married, I think we were worried if it was going to work out, too; everyone has their own pace of music. We're very happy it worked out very well."

And of course, unlike their other musical projects, their shared household offers the added benefit of spur-of-the-moment rehearsals. "Sometimes at midnight we can say, 'Let's go practice,'" Yuan says.

That connection is something the audience picks up on, Meek adds. "Sometimes you watch a concert and you can tell the two people aren't that close, there's no chemistry," he explains. "(When you have it), it makes the audience feels comfortable."

The duo will bring that chemistry to Whistler for the first time on Sunday, March 4 for The Meeks Duo: One Piano, Four Hands at Our Lady of the Mountain Catholic Church. For this show they'll focus on a selection of tangos by Astor Piazzolla, arranged for piano by Kyoko Yamamoto.

Meek first stumbled across the Japanese arranger's music at a Vancouver music store, but had to order Yamamoto's other scores online because he couldn't find them locally.

"These are really cool because they've been arranged really recently — one of them just last year," Meek says. "The music is just published and probably hasn't been played (in) Canada."

The couple remains tight-lipped about the rest of their performance, other than to tease, "There's some unconventional things we do with the tango," Meek says.

The Meeks Duo is just part of the work they do as musicians — but both say they're looking for more opportunities to perform as a pair. In the meantime, Meek will continue teaching music and work collaborating with other musicians while Yuan pursues a completely different project in addition to music: a cooking tutorial channel on YouTube.

"I've always been interested in videography and the year after I finished school I was pretty flexible in schedule, so I was like, 'Well, why don't we start something?' I have a lot of Western friends who ask me how to cook things in Asian culture and I've always been interested in acting," she says, adding she also takes the opportunity to riff on life as a musician as part of the videos.

"There are many moments in a musician's life that I find really funny and other musicians would relate to," she adds. "I love doing it."

Catch The Meeks Duo on Sunday, March 4 at Our Lady of the Mountains Catholic Church at 5 p.m., put on by the Whistler Chamber Music Society. Tickets are $20 for adults, $15 for youth (age 34 and under). They're available at the Whistler Museum (cash only), online at whistlerchambermusic.ca or at the door.

The print version of this story says the Meeks Duo concert is on March 2, but the performance is actually on Sunday, March 4. Pique apologizes for the error.