Evolution of mountain biking industry through the eyes of Sterling Lorence
Aug 1, 2008 2:30 AM By: Holly Fraughton 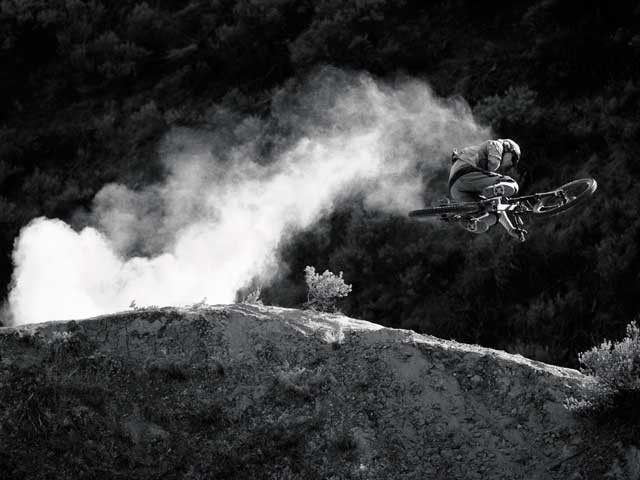 With shots capturing the best, brightest young talents in mountain biking over the past ten years, combined with the stunning natural beauty of British Columbia, it’s easy to see why Sterling Lorence’s work has graced the pages of any and all imaginable mainstream sports magazines.

Growing up as an outdoor enthusiast on the North Shore of B.C., Lorence was a gearhead first and foremost, but couldn’t help but be inspired by his surroundings.

“I’ve spent sort of a lifetime in the Sea to Sky corridor, so snowboarding, skiing and mountain biking took us to all of those beautiful places in B.C. and… I wanted to be able to shoot the amazing places that bikes and boards took us,” he explained.

The more time he spent in the great outdoors, the more he became motivated to record the surrounding beauty properly, eventually pushing him to learn about photography so he could capture the incredible moments on the trails.

Now, talented young athletes know the channels to take if they want to make it big – movies and magazines. But back in the late ‘90s, when Lorence was just learning the tricks of the trade, the commercial aspect of biking wasn’t really a consideration.

“That world of adventure sports being in the forefront of magazines today didn’t really exist when we were younger,” he explained. “It was more about just being out there.”

His career really took off when freeride mountain biking and the North Shore style of riding exploded onto the scene.

As an avid rider of these trails, Lorence was in the perfect position to capture the images that everyone wanted to see, working alongside riders like Andrew Shandro and Wade Simmons, when trail builders like Dangerous Dan were getting their start.

“The magazines of the world wanted to show that because it was something so dramatically different than what people were used to seeing,” he said.

He had found his niche.

Today, he works with some huge international businesses like Adidas and Oakley, as well as some of the largest corporations in the province to ensure he can maintain his career and home here in B.C.

“My goal was to sort of anchor myself with a lot of those local companies, knowing they need work, and I want to be their guy,” he said. “And I know where to go.”

He points out that he has spent 36 years getting to know the ins and outs of the province’s beautiful forests, which is a huge selling feature for his clients.

But Lorence stresses that he doesn’t just capture professional riders making 60-foot drops – beyond the hardcore mountain bike scene, he uses his lens to capture other things, whether it be trail running or a Toyota Tacoma ad in Whistler.

Though he’s based out of Vancouver now, Lorence has some strong ties to Whistler. He grew up skiing here, and spends a lot of time shooting throughout the Sea to Sky region.

He recently did a shoot with Gary Fisher Bikes, which reinforced how much the province has to offer in the way of diverse natural surroundings.

“We had five days to do 11 different bikes for their catalog, and…day one we were in Pemberton, up getting Mount Currie in the background, right through to shooting the sickest forest shots in Squamish… and then on the last night we were in Merritt, up in the Nicola Valley, up in the rolling grassland hills there with the firing sunset,” he said.

Within three hours, they were able to access some dramatically different scenery.

“I’m not planning on moving anytime soon,” Lorence said with a laugh.

That said, his career has taken him all over the world. He’s been to Morocco, Africa, the Canary Islands, Hawaii, and other countries to shoot. Right now the world wants to see B.C., so he has the option to stick close to home.

For the month of August, beginning this Saturday, Lorence will be exhibiting a wide range of his work at the Blake Jorgenson Gallery in Whistler.

“It makes me feel pretty fortunate to have Blake give me the call to be one of the people that gets to be in his gallery,” Lorence said, “That’s obviously an honour, being alongside him, because I certainly respect his work and what he does.”

He has selected pieces that he hopes will appeal to the diverse crowd that frequents Whistler, not just the hardcore mountain bike industry professionals — showing new work alongside shots from the beginning of his career, and showcasing B.C. and other places photography has taken him over the years.

“There are so many visitors there from all over the world, and so many different types of people coming through that space,” he said.

Visitors can expect to see a well-rounded selection of some of Lorence’s most powerful work from over the past ten years.

“I’m not getting too specific in one area, I’m sort of trying to hit all the spots – from the North Shore to some of the more crazy stuff we’ve done in Utah, and then a little collection of black and whites,” Lorence added.

Each piece will be accompanied by a narrative so visitors can get the real story behind the shot.

The timing is appropriate, too – the exhibition takes place during Kokanee Crankworx festival, an event that sees biking enthusiasts from around the world flock to Whistler to race and check out the talent.

“There should be a pretty good group of people walking through the gallery, which is obviously great exposure, as well, to people who don’t really know me or didn’t realize that I was from this area,” he said.

Though he’s in the midst of catalog season, Lorence will also be shooting in the area during Crankworx and doing some work for Whistler-Blackcomb.

There are sure to be a lot of talented, aspiring bikers in town, and Lorence hopes his photography will inspire a new appreciation of the hard work and passion within the industry, promote the natural surroundings that bikes to can take us to, and show how the sport has evolved over time.

Lorence’s exhibition is set to open at the Blake Jorgenson Gallery on Saturday, Aug. 2, the same evening that the gallery hosts an opening reception for the Whistler Art Council’s annual ArtWalk.