The Sheepdogs are GO Fest bound 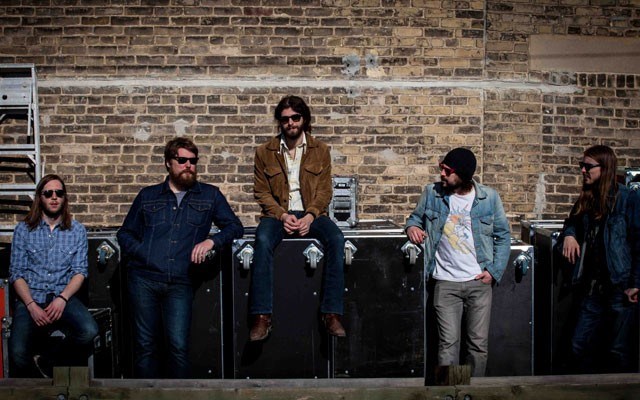 Ewan Currie, lead singer of rock band The Sheepdogs, is at home in Saskatoon, taking an easy Thursday after time on the road, so easy that he wasn't sure what day of the week it is.

"It's always relaxing when you don't know. It is Thursday, right?" he says.

He's equally chill about remembering the last time The Sheepdogs came to Whistler.

"I know we were there for some show where we played outside and then we played inside later that night. It was two shows in one day, which is always basically tiring," he pauses. "Hmm. I don't know if we've played there twice or we played twice in one day."

Fair enough. The Sheepdogs have had a stellar and crazy-busy couple of years touring since they were winners of the Choose the Cover competition run by Rolling Stone. It wouldn't be surprising if things tend to blur.

"But when we talk about going to play places in Canada, Whistler's not a hard sell," Currie says.

The Sheepdogs perform at this weekend's Great Outdoors Festival (GO Fest) on Friday, May 16, from 8 p.m. to 9:30 p.m. The concert is free at the GO Fest main stage in Village Square.

"We're in Saskatoon and we jet out to wherever the next spot is," Currie says.

"It means you can go to all these places and forget the details. You struggle to remember what visit in Germany something happened, who was with us. It's kind of nuts, a lot of a hotels. I'm an expert on airports. I've been joking that I am going to write a book called The Fallacy of Security about the whole airport experience. It's so frustrating, all the things they do in the name of security."

The romance of travel is definitely dead and buried for Currie, he likens it to the daily commute to work.

But the career has "gone pretty well," three years on after the Rolling Stone discovery.

"A lot of times, the success of winning that kind of competition doesn't stick around. That's why we worked so hard to get across Canada, or the world, as much as we can. We want to make sure that people knew we were an actual band who knew how to play live," Currie says.

"It's three years this summer since that issue came out. We're booked up for the summer and we've got that new album that we're working on. Everything's good."

Currie says they embraced their rock music in almost a cultural sense.

"With music nowadays, it's so focused on trends and what's hot. I guess it was always like that, but I never got into because it was what the girls and the guys in my class were into. For me, I always got into whatever hit my ears and made me excited," he says.

"It was guitar riffs and people singing harmony, stuff like that. All through my teens and into my 20s, I was always meeting people who were in the same boat. They loved Zeppelin or The Guess Who or Neil Young.

"And they are still into that, they sit around campfires and play acoustics. There are a lot of people out there who aren't into what the kids are into. They just want to do their thing, and that's where we come along. People will always want that guitar rock."

One fun and memorable weekend for The Sheepdogs came in Winnipeg earlier this year when they won the Juno Award for Video of the Year, their fourth Juno. It's for the song "Feeling Good" and shows Currie, along with fellow Sheepdogs Leot Hanson, Ryan Gullen and Sam Corbett, as rocking, plastic G.I. Joe types.

The video was made by Matt Barnes.

"The idea began as, 'What's the video we could make that we wouldn't have to be in?' We've done videos, film and TV, and it's amongst the worst crap ever. It's all that waiting around to make one second of footage. It's so dull," Currie says.

"Matt immediately got it and ran with it. He made this badass stop motion G.I. Joe video."

Their new album is being written but will not come out in 2014.

"We're having the first time off in a long time. We basically did three years of really hard touring. We'd do a Canadian tour that was 20 days on and two days off, and that's really taxing when you're travelling and playing — and drinking, of course," Currie says.

"For the next one we want to take our time and let things slow cook for a little bit. We have a bit storage space here in Saskatoon and I go in there any time and work on songs. We're doing it at a natural pace and I think that when we finally put this thing out, it's going to have results that will speak for themselves."