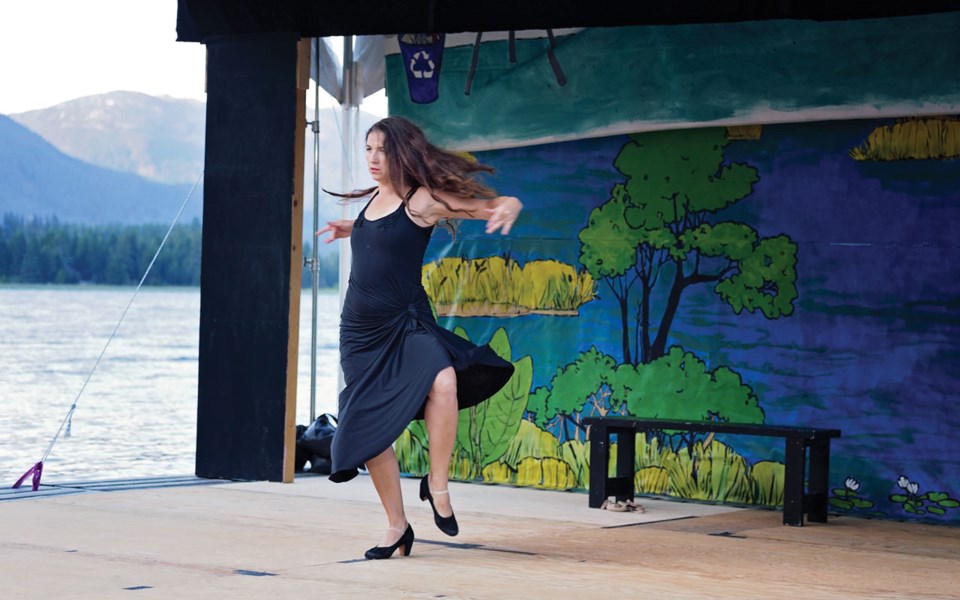 A dancer performs on the floating stage at the Flag Stop Theatre and Arts Festival in 2019. The event is returning with new protocols on Aug. 7 and 8. Photo by Yulia Gladysheva

The Flag Stop Theatre and Arts Festival is taking place on Aug. 7 and 8.

In normal times, that fact alone wouldn’t warrant highlighting in the first sentence of an article, but with nearly every summer festival around the world cancelled, it deserves top billing.

“When the press release went out a week ago and the tickets went up, in two days, half were gone,” says Stephen Vogler, artistic director at The Point Artist-Run Centre, which puts on the annual festival. “I’ve never seen that happen before.”

Of course, the festival will look a little different this year. The most notable change: the annual stage production will take place entirely outside under a tent over two days with smaller groups of 50 people each night rather than one big night.

“As [the province] went into Phase 2 and then Phase 3, we thought we could pull it off with the outdoor aspect and fewer people,” Vogler says. “You have to plan a lot to follow protocols and think your way through how it will work. You have to think ahead way more than you normally would.”

There will be “no mosh pits, for sure,” Vogler says with a laugh. “It will be a little on the mellower side.”

Festivalgoers will also have the option to buy a ticket that includes a picnic dinner from Vancouver café Aphrodite’s as well. “People are buying tickets in blocks of two and four,” Vogler adds. “They can be seated together. That kind of stuff fell into place nicely.”

Finally, both evenings will culminate in a performance of a play called Shipwreck Casserole and Other Family Secrets, by local playwright Karen McLeod.

It’s about a family that visits their old cabin at Shawnigan Lake where family secrets dating back to the 1950s resurface.

“Throw in a mysterious distant relative from Australia and new revelations on the deed to the cabin, and this shipwreck casserole gets mighty tasty,” the description reads.

This year, for the first time, Kathy Daniels and Amy Reid from Squamish’s Between Shifts Theatre are directing the small, five-person cast.

As usual, the play will take place on a floating stage on Alta Lake, but this year, it will be under the cover of darkness.

“The play will end in the dark, which will make the lighting more effective for the outdoors,” Vogler says.

If you can’t make it—or it sells out quickly—don’t worry. They will be livestreaming the whole thing.

“You can watch it from the comfort of your home for $10 a ticket,” Vogler says. “It seemed like a nice way to extend it and stretch our technical capabilities … We brought together an amazing team.”

Tickets for the festival are $50 with dinner, $30 for the show only, and $10 for online streaming. Get them at thepointartists.com/events.html.