The Zoom Chronicles drums up drama in quarantine 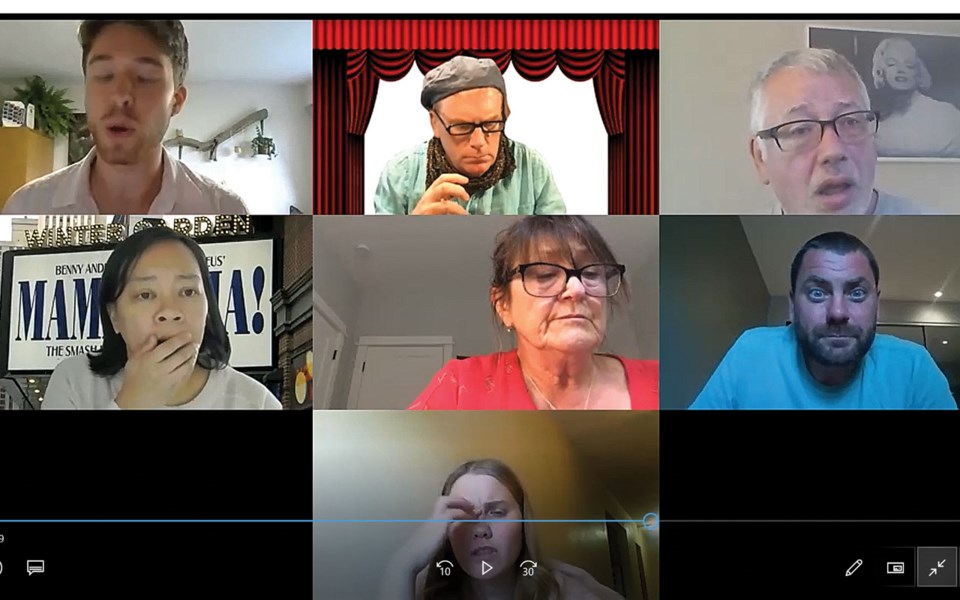 Back in late March, Between Shifts Theatre was a week away from debuting its production of Sexy Laundry when the COVID-19 pandemic hit and brought gatherings to a standstill.

But rather than push the pause button indefinitely, the group decided to adapt to the virtual times.

“Over the last few years, we kept wanting to do another night of one-act plays by local playwrights and have an evening of short plays,” says Kathy Daniels, executive director of Between Shifts. “(Also), all the theatres are closed and we have no idea when we’ll be able to use a theatre again, but we still wanted to keep the artistic juices flowing.”

And that’s how the idea for The Zoom Chronicles was born. Between Shifts put a call out for one-act plays under 10 minutes that could be acted on Zoom. Initially, they planned to showcase four in one night.

“We got [seven] one-act plays submitted to us,” Daniels says. “They were all amazing, so we decided to use them all and make it two evenings.”

In total, they received two plays from Joseph T. Leander (which, they later learned, was a pseudonym for one of their board members, Peter Slade), one from Pique’s own Brandon Barrett, one from Sara Marrocco, one from Janice Carroll, and two from Whistlerite Karen McLeod.

For her part, McLeod submitted Self Help on Halloween—co-written with her son Levi—and Elite Panic.

It turns out—with a little tweaking to accommodate the fact that actors are all acting on Zoom from separate locations—they did work.

Self Help on Halloween centres around a family answering the door to trick-or-treaters, only their most enthusiastic member, Dad, has been exposed to COVID-19 and is stuck in self-isolation in the bedroom. To help soften the blow, his family Zooms him in to answer the door.

“I went with silly,” McLeod says. “I like to turn things on their head a bit and do the unexpected.”

To that end, Elite Panic is about two girlfriends trying to recreate a day at the Scandinave Spa while in quarantine.

Meanwhile, local actors and directors have been hard at work bringing those plays to life with the added challenge of rehearsing on Zoom.

“It’s a very different experience than doing theatre,” says Daniels, who’s also acting in one play and directing another. “It’s not the same at all … It’s just the communication. You have to work really hard at communicating. In some ways, I find it takes more energy. You don’t have the benefit of full-body communication. After a couple of Zoom rehearsals, I’m done. I’m toasted.”

But now, with several weeks of rehearsal behind them, they’re preparing to record the plays and then post them on YouTube and their website for people to watch for free starting on July 5.

“We were thinking we’d do it live, but then we realized that’s too perilous to ask people to do something like that,” Daniels says. “In one of the plays we’re in we’re going to pretend we have a freeze, but to have a freeze while you’re actually doing the performance wouldn’t be so good.”

Even given all the logistical challenges and extra learning required to put on the show, Daniels says she’s happy they forged ahead with the idea.

“I am so glad we did this,” she says. “One of the main reasons is to connect with these writers. These writers are so brilliant, I can’t believe it. I’m hoping in the future, we can get these writers to write for us again.”

Check out The Zoom Chronicles, with plays beginning to be released on Sunday, July 5, at betweenshiftstheatre.com.