Time to drink in 7UP

Six comedies and one drama add up to a great night of theatre at Millennium Place
Oct 22, 2014 6:00 PM By: Cathryn Atkinson 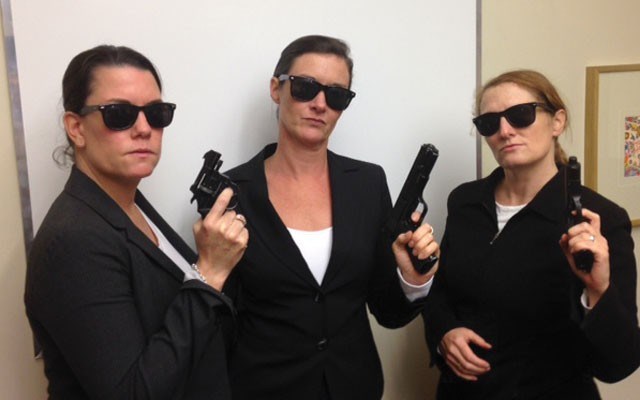 Gunning for you The cast of The Tarantino Variation, one of seven plays being put on at Millennium Place on Oct. 23, 24 and 25. Photo submitted

It takes guts to present a stage play.

It's hard work — there are a lot of people to coordinate, stage crews as well as actors. It's expensive — sets and travelling and making sure everyone is taken care of. And it's time consuming — there's one production, everyone invests a lot on rehearsals and building the show.

Now imagine multiplying that by seven — 7UP, to be exact.

That's the name of a new collaboration of short plays at Millennium Place between Whistler producer Susan Hutchinson and Kathy Daniels, the artistic director of Squamish's Between Shifts Theatre Company.

The plays selected are written by both regional playwrights and some well-known names.

"It's been interesting working with all these people and trying to fit in rehearsals between so many jobs and crazy hours. Absolute kudos to the participants for doing it," says Daniels, who is directing all seven.

"I've been involved in evenings of one-act plays where I directed one, maybe, and been in another one."

Is it like raising seven children as opposed to one?

"Pretty much! I rehearse three times a week. This means that on Day 1 I rehearse plays one, two and three. The next day it is plays four and five. The day after that it's plays six and seven."

In all, the production took two months to prepare.

"It's wild stuff, but it's a great opportunity. There are some really super talented people in Whistler and trying to get them exposed to the public a bit more is important," Daniels says.

All of the selected plays are comedies, apart from one — Designer Genes.

The 7UP plays are:

The Loneliest Vampire — Typical 'boy meets girl' set up, but with more teeth; and 72 Hours and a Concept —Writing a film concept in 72 hours may impact your sanity, health, and friendships, but, it's fun. Right? Both are by Vancouver writer Alan Forsythe.

Pause on Harmony — Two old high school friends have some hot flashbacks and take on the mountain, by Whistler writer Karen McLeod.

The M Word — It's important to be committed, organized, and focused when drawing up documents for a long-term relationship! By Six Feet Under writer Alan Ball.

The Tarantino Variation — It's Kill Bill meets the OK Corral as three guns for hire try to complete their hit list. By Seth Kramer; Designer Genes — Dolly the Sheep is old news. And designer genes are all the rage. By Kent R. Brown; and The Man in the Bowler Hat — A terribly exciting affair happens to the humdrum life of John and Mary. By A.A. Milne, author of Winnie the Pooh.

"I hope folks come out and see the plays. It's a very unique entertainment for Whistler, there isn't a lot of live theatre," Daniels says.

"It's a nice eclectic mix of stories and by doing seven plays we were able to include more actors who only had time to do something shorter because of busy work schedules."

Hutchinson said the support of the Whistler Arts Council made the production possible.

Tickets are $20 and available at Millennium Place or online at artswhistler.com.