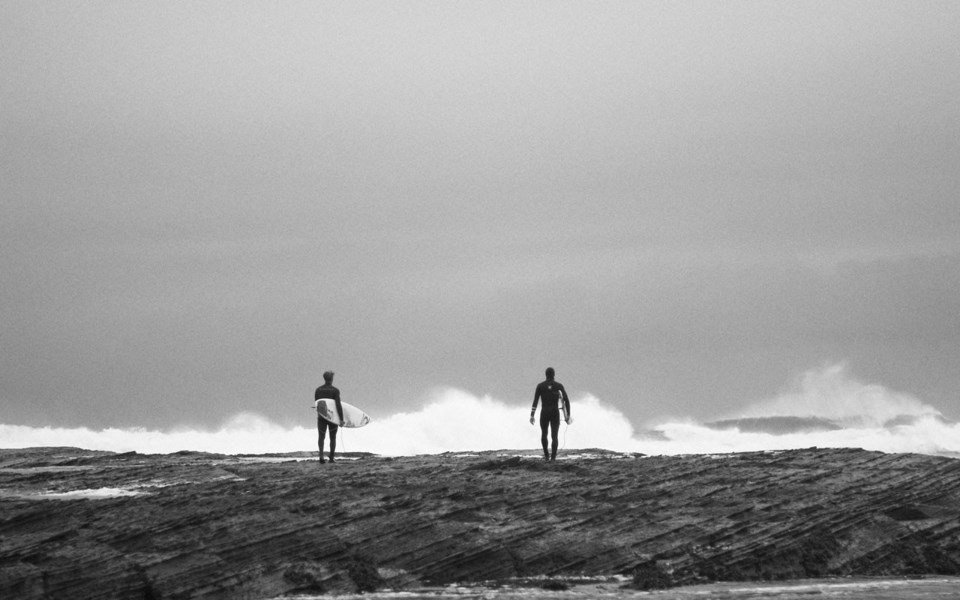 "I came from a snowboarding and a commercial background," Laverty says. "I shot snowboard films for eight years and moved into commercial from there. That's what inspired me to be a filmmaker."

His new film—a "surf documentary-action-sports-movie"—chronicles the journey of Tofino-based professional surfer, Noah Cohen, as he overcomes injury in pursuit of the 2020 Olympics.

"In talking to Noah, he had a really, really cool story—his upbringing and all of that," Laverty says. "Two years ago he blew his knee out and nearly gave up surfing. The film is not necessarily a chronological year-in-the-life of Noah; the film opens telling (the) story of where he was born and what his life was like and (explores his) family situation."

The hook for the story, though, was the debut of surfing in the 2020 Olympics set to take place in Japan. While Laverty—who lived in the corridor for many years—had never been interested in the Olympics or the competitive element of action sports, that changed after he was hired to shoot a 10-part series on the Canadian Olympic Snowboard team as branded content for Mazda.

"I was so engrossed with the series we were doing for Mazda, I felt a bit of inspiration to tell a story about surfing in Canada related to the Olympics," he says.

Initially, he envisioned approaching Pete Devries—widely considered the biggest name in Canadian surfing—to tell his story, but Devries had been sidelined with a back injury. On top of that, as such a big player in the sport, he was inundated with similar requests.

That's when Cohen emerged on Laverty's radar. "I have known Noah for probably seven years, but I haven't been close friends with him," he adds.

As he delved deeper into Cohen's story, though, he realized he was a perfect fit for the project. Laverty ended up following him for the better part of a year as he travelled to places like Peru and France chasing swells and competing. "I had never done a surf piece (so) it was cool Noah trusted me to tell his story and do this," Laverty says. "In the end, I had a really amazing time. Some of the reasons why I had an amazing time was working with these athletes."

In a twist of fate, one of those athletes turned out to be Devries. "Pete is a really big part of Noah's career," Laverty says. "He's a mentor and a friend for him, but Pete didn't know me and my work, so he wasn't coming out with us for the first few months. But he started seeing my footage and Noah talked to him about our trips."

Eventually, Laverty's work won Devries over and he joined them on a surf trip to Nova Scotia. "Now (for the second year of Transition) we're focusing on Pete," Laverty adds. "To go back and tell his story about how he grew up and what it was like and the path he took to get where he is now, no one has done that with Pete. I feel really lucky to do that."

Ideally, he hopes to put out a series of three films about Canadian surfers leading up to the 2020 Olympics. "I want to tell the story to Canadians about how we have surfing here and we have surfers who can compete and what we have to offer the world on the Olympic stage," he says.

Looking at his own career, Laverty says the transition from mountains to ocean has been fulfilling.

"I'm a storyteller. I like to tell stories and often it relates back to action sports," he says. "In my experience, the stories that you find in surf culture and the people, the athletes, the locations, it's all much deeper ... to me than snowboarding. Snowboarders have similar stories in my experience; they came from semi-wealthy families and moved to Whistler at age 16 and that's their story. In surfing, they often come from very humble backgrounds. That creates a much more dynamic story."

Whistlerites can screen Transition on Friday, May 18 at 9 p.m. as part of the Whistler Film Festival's Adventure Film Series, running as part of GO Fest from May 18 to 20.

To purchase tickets, or see the full schedule, visit whistlerfilmfestival.com/events/adventure-film-series/.