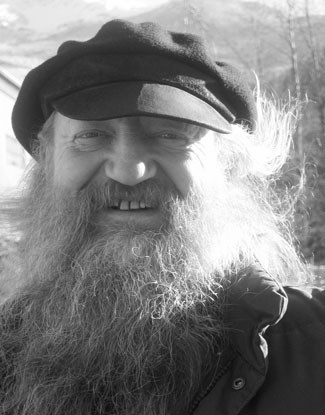 What: The Magic Triad; New watercolour exhibition by Bernhard Thor

A burly, outdoorsy man with a full beard reclines against a resting horse in a majestic wilderness setting, his face serene, perfectly content in his surroundings.

It is a signature piece in The Magic Triad, a new exhibition of watercolour paintings by Bernhard Thor running throughout the month of January in the upstairs gallery space at MY Millennium Place.

While the show depicts a variety of subjects including wildlife, landscape and nudes, there can be no doubt that this piece depicts not just any random, weathered homesteader, but Thor himself. The physical similarities are too obvious to dismiss. Like the figure in the painting, Thor is a burly, bearded, gregarious man; weathered by the pioneer life he has carved out for himself and his family in the Bendor Mountains above Anderson Lake since 1969. A rugged individual who lives harmoniously amidst a wilderness colour palate that inspires him to create.

However, he insists the piece and the exhibition is not meant to be autobiographical. "It’s not about me," he insists. "It’s just an image in colour."

Born in 1943 in rural East Germany, Thor’s early years were lived in the fog of war and then under the iron fist of Communism. He escaped in 1961 at the tender yet immortal age of 17. He immigrated to Canada in 1963, ending up in Vancouver where he completed studies in painting and sculpture at the Vancouver School of Art (now the Emily Carr Institute) in 1968.

The following year Thor and wife Mary migrated up the Sea to Sky corridor, finding a home in the rugged mountains around the Seton Portage.

Though his ambition as an artist has been tempered by the demands of raising a family, Thor has pursued his various crafts with a resiliency he attributes to growing up in wartime.

His works have been shown in a variety of venues over the years: his stone sculptures at Vancouver’s Mary Frazee Gallery in the early 1970s, his woodcarvings and paintings regular features at the Brackendale Art Gallery. Large public wood sculptures carved for the United Nations Habitat Conference in 1976 are still on display in Vancouver’s Jericho Park. He has focused on watercolour painting for the past year – the fruits of which make up The Magic Triad exhibition at MY Place.

The exhibition is his first public showing in Whistler, although some of his most renowned handiwork adorns the iconic Mushroom House in Whistler’s Emerald Estates. Thor carved several pieces for Zube Aylward’s architectural wonder, including the intricate dragon over the fireplace. He also contributed stone work, painting and custom upholstery.

He sees the Mushroom House as a representation of Canadiana itself, calling it "youthful, bold, rough enough to steer the imagination," and possessing a certain "vulnerability" that comes from having something exist that is unable to be duplicated.

It’s the same vulnerability he sees in the natural world, in the deer and other wildlife he paints with graceful brush-strokes. Among the wide array of hats worn by Thor is that of a horseback guide, allowing him to spend several months of the year in the alpine among animals he regards as his friends, and seeks to depict in colour.

Colour is not just a tool for Thor, but a philosophy. The Magic Triad refers to his views on the spirituality of colour, what he deems "colour theory." In brief, it is a way to recognize with the eye what the soul sees of colour.

"The eye has to be interested in finding as well as seeking," Thor says. "The eye has to be reverential to see what our soul sees." It’s a concept he lives rather than simply considers, and has taught in adult education art classes at Cariboo College.

"It sounds very airy-fairy," he chuckles, his still-strong German accent labouring over the words, "but I’m a solid bloke.

"I trust them," he declares, holding out his weathered hands. "When it comes to art for me I never make compromises."

The Magic Triad will be on the walls in the upstairs gallery space at MY Place through the end of January. Bernhard Thor will be in attendance at a reception for the exhibition Jan. 9, 2-5 p.m.