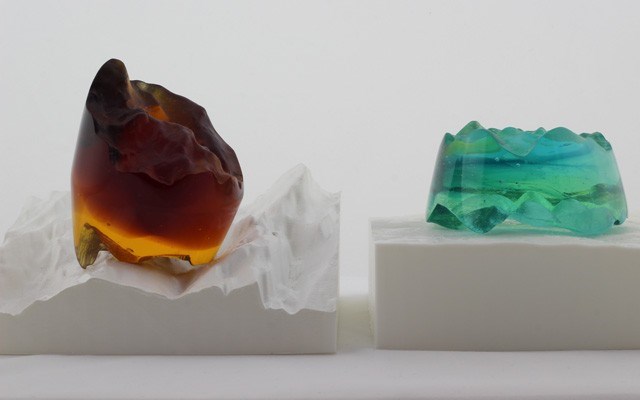 Artist Jenny Judge can hold the northern and southern hemispheres in one hand.

One of the founders of the Mountain ObjectMakers Cooperative in Function Junction, Judge creates kiln-cast glass objects based on landscapes with significance to her life.

One of her pieces — called Hemispheres — can be seen through August in a show called Embracing Innovation at The Craft & Design Centre in Canberra, Australia.

"I documented beach tidal formations (in New Zealand) and the mountains around Whistler — which is why I called it Hemispheres. I have a home in each hemisphere," Judge says.

"It's all about the topography. For years I had noticed that when the tide goes out it leaves beautiful formations in the sand. I would take my camera and shoot it from different angles, interpret the photo with software that would turn it into 3D."

She says climbers understand what she is trying to do.

The Australian exhibition caught her imagination when the call went out for artists.

"I knew the work of the curator and it is great to be accepted into that show," Judge says.

She spent a year on research before she started making the glass pieces, and this was important to the exhibition, too.

"Along with my proposal and my artwork, I had to put in a long statement about my research and innovation, and how it's used," she says.

"A lot of times as an artist you are applying for exhibitions. My goal this year was to apply for international juried exhibitions and this one interested me because it had to do with using technology in an innovative way with craft.

"I really enjoy the blending of technology with the handmade and that dialogue with craft.

"And they're just so pretty. They're like little jewels."

Judge brings a 3D printer into the mix to create the desired effect, turning her photos into moulds to pour molten glass into.

The accuracy is striking, with physical locations reshaped for artistic purposes. Colourful glass is the medium that holds two locations together and the result is a reinterpreted landscape on a smaller scale than reality.

"They're all one-offs that come from a process of mould making. I find it interesting that it can be a one-of-a-kind translation," Judge says.

She likens the use of moulds to printmaking, where she thinks about negative and positive spaces. And the glass means she can see "inside the landscapes." Two landscapes are, for her, more powerful than one.

The artwork can be wall pieces or handheld.

"I like people to move it around and look inside, which is why this work developed," Judge says.

"It stems back to the history of the paperweight at the turn of the century. People were mesmerized when they held a little world in their hands.

"Traditionally, it was botanical or colours. I'm not making paperweights but the size makes it more personal. That is why I am working on this scale."

Staying on the path toward international recognition, Judge is also in the World of Wearable Art show in New Zealand, which opens in September.

Previously Judge worked with installation art. She became interested in working with kiln glass after her family moved to New Zealand in 2004. Her love of nature shapes her work as much as the medium and technology.

It is important to her to stay small scale with her work.

"I don't want it to become too big, then it would be just about the glass," she says.

"You become so involved in what is happening in the glass that you're not looking at the details of why the object exists in the first place."

She emphasizes that the work is not conceptual art because it is "embedded in the craft community."

Her plan is to take what she has started and produce solo shows in the future.