Under the radar no more 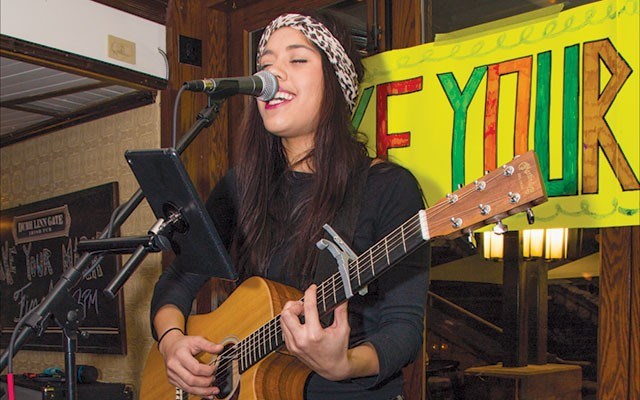 When Sarah Henare showed up for her qualifying round in the Dubh Linn Gate's second annual Make Your Mark music competition, she thought it was a last-minute fill in for a cancelled gig.

It wasn't until she arrived at the pub, guitar in hand, that she learned it was a contest.

"So here I am with my covers and all these people are doing originals, and I was like 'oh, I am not prepared for this,'" Henare laughed, in a Friday afternoon phone call. "It just kind of snowballed from there."

Henare won her qualifier and didn't look back — on Nov. 29 she beat out three other finalists to claim first place in the Make Your Mark music search, and the $1,000 prize winnings that come with it.

The victory is all the more impressive when you consider the local music scene mainstays Henare was up against in the finals — Will Ross, The McQuaid Trio and the Funky Snow Monkeys.

"It was really fun, and I was just so stoked to be in that place with so many talented people, and just meeting all these people after being under the radar for so long," she said.

"There's so much good talent out there and it's a good way to meet people as well."

Henare, 21, arrived in Whistler from Australia less than two years ago and has been flying under the radar ever since.

"I came to Whistler actually to find my sound, my voice I guess, and for a long time I was just, you know, keeping it on the D-L, keeping it kinda hushed, even though a lot of people close to me knew I was alright," she laughed.

"And now I've kind of come out of my shell a little bit more."

She describes her solo stylings as "mellow, really chill, but I try to make it individual as well, because there's so many artists out there that just play guitar and sing," she said.

"So I try to make my music something that you haven't heard before, a little different but still pleasing."

Judging for the contest was based on six different performance aspects: stage presence, audience engagement, technicality/musicianship, sound, gigability and originality.

"It was almost as if she had a four-octave range and could sing almost any song by anyone — along with some beautiful originals of her own.

"It was a fun contest. I'm super happy to give local musicians a chance to be heard."

And for Henare, that's exactly what the contest represented — a chance to be heard.

"I had a really awesome time, met so many cool people and it's a really cool thing, and if there's anyone out there that's thinking about getting into the Whistler music scene just to get around it, ya know?" she said.

"Go to the open mics, go to the gigs, meet people, try and put yourself out there and don't fly under the radar for about two years like I did."

It's safe to say Henare is on Whistler's radar now — keep an eye out for her future performances in the village.

"Oh man. My plan is to not give it to my landlord. I don't want to spend it on rent," Henare said.

"I want to maybe buy something to help me in my music quest, I guess, or maybe a holiday. That would be nice."