Catch The Geekenders at the Maury Young Arts Centre on Saturday as part of the Arts Whistler Live! Performance Series
Nov 14, 2018 5:00 PM By: Alyssa Noel 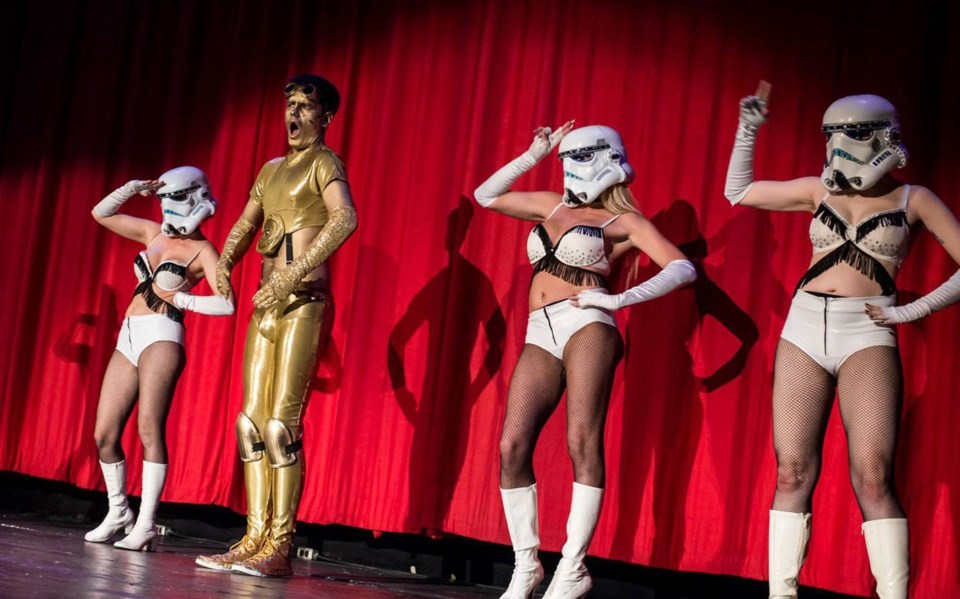 nerd out Vancouver's The Geekenders brings its production of Full Frontal Nerdity to the Maury Young Arts Centre on Saturday, Nov. 17. photo submitted

Vancouver's pop culture burlesque troupe, The Geekenders, are set to bring their production of Full Frontal Nerdity to Whistler.

The revue-style show features characters ranging from R2D2 to Batman and Pikachu—only, there's usually a twist.

"We try to put new spins on things you already like—not just to be sexy and fun, but (we explore) what if this character was female? What if this character was a different race?" says Fairlith Harvey (a.k.a. Trixie Hobbitses), who sits on the executive board of directors and performs with the group. "That is our entire modus operandi: to give people an entirely different perspective."

One example? Portraying R2D2 as a girl. "Why can't R2D2 have different pronouns?" she asks. "He's a little garbage can."

With a mix of theatre, comedy and burlesque, The Geekenders first launched in Vancouver in 2012 with the aim of being inclusive and showcasing as many diverse performers as possible. Since then, they've featured over 300 performers with 80 people in their regular cycle and 20 of those part of a core group. They also ensure to feature one new member in every performance. "It's a group of totally professional performers of different genders, sexuality, body types, races," Harvey says. "We have someone who's new (in) every show ... We think it's only fair."

While the show in Whistler is 19-plus—with some performers stripping down to pasties and underwear—Harvey says it will be accessible when it comes to varying levels of pop culture nerd knowledge.

"Our host does explain what everything is," she adds. "But for a show like this in a community like Whistler we've curated a show that's fairly mainstream ... We've tried to make it as accessible as possible."

The group already has a sense of what to expect at the Nov. 17 performance at the Maury Young Arts Centre; they recently performed in the same venue for Arts Whistler's presentation of The Rocky Horror Picture Show before Halloween. The group performed as a "shadow cast," which meant they sang and danced simultaneously while the film played.

"Whistler is absolutely ready for something new," Harvey says. "Whistler has a huge percentage of young people who don't have a lot to do other than go out dancing and drinking. Rocky Horror was well attended by a grateful group of Millennials. That's what Arts Whistler is trying to do this year is get more young people out."

If nothing else, audiences just might walk away with a newfound sense of empowerment, thanks to The Geekenders' underlying message. "A lot of us have different body types than you might see on stage," Harvey says. "A lot of us are finding empowerment in that and wanting to give the audience the opportunity to see people that look like themselves on stage. That, I believe, is the reason we're successful as a group. People are so excited to have a break from seeing beauty encapsulated in a box of thin and white."

Tickets are $15 in advance or $20 the day of. Get them at showpass.com/o/arts-whistler/.