Orchestra and VSO Orchestral Institute at Whistler won’t be returning to the resort this summer
Mar 9, 2019 8:00 AM By: Alyssa Noel 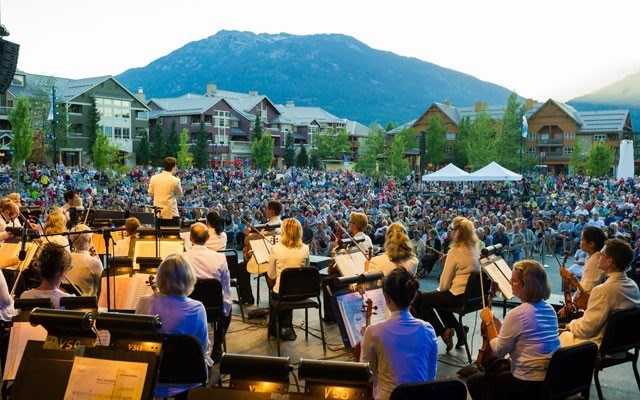 The Vancouver Symphony Orchestra has performed in Whistler every summer since 2012. Photo by Mike Crane/Tourism Whistler

The Vancouver Symphony Orchestra (VSO) won't be performing free concerts at Whistler Olympic Plaza this summer for the first time since 2012.

"What I understand is we're a victim of our own success," says Kelly Tweeddale, president of the VSO and the VSO School of Music. "It's been really hard to find (performance) rooms for the orchestra and the institute. Over the years, we have found ways to overcome that and try to make the dynamics and budget work.

"The institute has continued to grow and grow, so when the municipality, as I understand it, went through their strategic planning process over the last couple of years, they ended up with a decision that the majority of the animation budget should be focused on the shoulder season. That led to them re-looking at programs and re-allocating their budget."

Councillor Cathy Jewett, who serves as the council representative on the Festivals, Events and Animation committee—which decides on the Whistler Outdoor Summer Concert Series lineup that's funded by the province's Resort Municipality Initiative (RMI) and Municipal and Regional District Tax (MRDT)—said there were a lot of logistical challenges to accommodating the VSO. She cites the example of unpredictable weather on July 1 as an example. "We did whatever we could to support them in any way, but it is a big task to provide that support," she says.

Because there wasn't room for the Institute, the VSO also had to pull out of performing in Whistler.

"When (students are) here, the orchestra members are mentoring and teaching. They can hear the rehearsals—the mentorship is really unique. When we looked at, 'Can we de-couple these?' it created all kinds of issues," Tweeddale says.

Whistler's Mayor Jack Crompton says it's been "a terrific run" with the VSO.

"We're really grateful the VSO called Whistler their summer home for the last five years," he adds. "We'll miss them, but the door is open for them to return in the future."

Jewett likewise indicates the FE&A committee could consider inviting members of the orchestra back. "Some things we've been considering are having a quartet—a string quartet or a group of wind instruments)—so we can spread it around instead of having one giant event," she says.

For its part, the VSO hopes to perform in Whistler again.

"It's been a highlight of the orchestra summer season to come up to Whistler," Tweeddale says. "Never say never; we would love to be invited back and we would make it happen in a minute."

In the meantime, she says the VSO is thankful for the Resort Municipality of Whistler's (RMOW) support starting the VSO Orchestral Institute at Whistler in 2015. "It started in Whistler," Tweeddale says. "The institute would not be where it is today without the municipality's investment and an idea we had. They were our primary founding funder to make it happen."

For this summer, the VSO Orchestral Institute has partnered with the University of British Columbia (UBC) and the Chan Centre for the Performing Arts as venues. "Every year it was becoming harder and harder to find a ballroom where the orchestra could rehearse (in Whistler) that was big enough and had the acoustic abilities ... Now with our partnership with UBC, we have professional venues that the Orchestral Institute will perform in," Tweeddale says.

Those who might miss the annual free, outdoor performances in Whistler can travel down to Burnaby on June 30 where the VSO will play at Deer Lake Park. They will also perform in Vancouver at Sunset Beach on July 7.

This story has been updated from the original version.