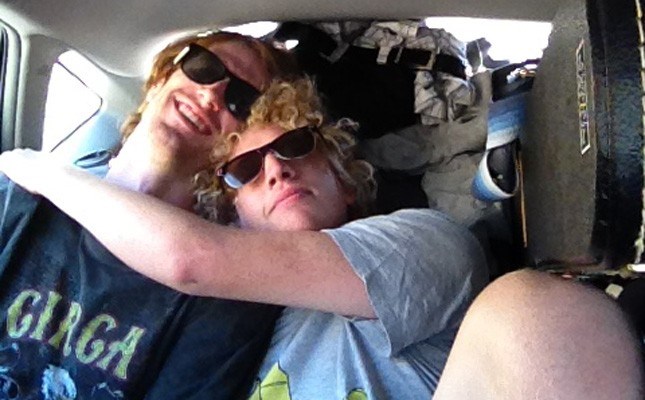 Crammed and lovin' it Animal Nation's Garnet Clare and tour buddy Mark Ejack are crammed in the back seat of a Prius, along with four guitars, two turntables, two amps, a DJ mixer, one collapsing table and a banjo. Oh yeah, and the remaining two AN members.

When speaking to the guys in Animal Nation, one gets the sense these guys know of only one way to exist: through gleeful depravity.

They've spent the better part of five months on the road and every night has been coloured by drunken shenanigans of the unholiest of orders: signing and stickering female body parts that are normally clothed (sorry mothers); smoking copious amounts of a certain illicit green substance onstage (sorry kids); passing out on the front lawn of at least one church (sorry Jesus); among other unmentionables too, uh, spicy for these here pages.

This is the sort of behavior reserved for hair metal bands of the '80s and lousy punk bands of today. Animal Nation, however, are purveyors of finely-knit, intelligent hip hop and are one of the finest musical acts to emerge from Whistler ever. You might never have thought Animal Nation — Garnet Clare, Mike Armitage and guitarist Jeff Waters — would constitute the West Coast hip hop's answer to Motley Crue, but if anyone should fill that role, Whistler should feel proud it's one of their own.

But let's put the decadence aside for now. Clare says the last stretch of shows have been "some of the better shows" they've done in their entire career.

"I feel like we've gotten to a spot where we're so comfortable on stage and with the material that we're playing now," he says. "When we did that March tour, we'd only been doing the material for a few weeks. Now, we've been doing it for over six months and we actually feel like a tightly knit band.

Dependability of band members is, of course, only merely one highlight of the tour so far. Among others: premiering Clare's accompanying short film to his solo cut, "Somebody That I Used to Know" at the NXNE Film Festival; playing the Vancouver Island Vancouver Island Music Festival, opening for k.d. lang and Emmylou Harris for 10,000 people; and receiving a Much Music video grant, which they'll use to shoot a video with a professional photographer for their song, "The Lasagna Song."

They're latest album, The Basement Tapes, Vol. 1 has been nominated for a Best Rap/Hip Hop Recording at the West Coast Music Award. Clare says they'll head to Regina on Sept. 30 award ceremony, "where we'll lose to Swollen Members."

To be nominated at all is a significant milestone for the group. Clare says that The Basement Tapes is the first album where people across Canada have begun taking notice.

"This is sort of the first one that people are hearing," he says. "We've been building a lot of momentum."

Suffice to say, Animal Nation's final show of the tour at Tapley's on Saturday will be something of a victory lap.

Get out there. Support the locals.