What is art and why are you swearing? 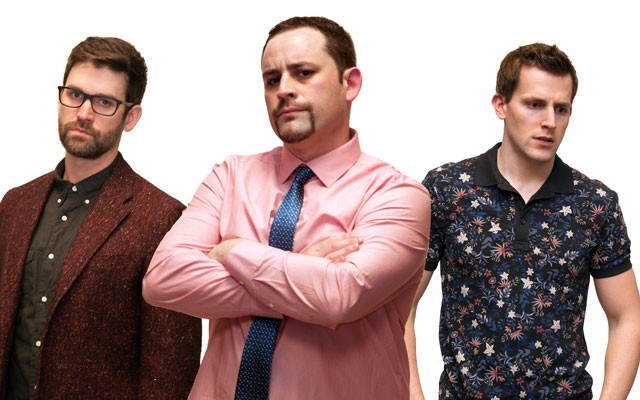 You can almost imagine it happening in Whistler.

Three sophisticated, art-loving buddies — Serge, Marc and Yvan — lead a good life with a friendship that has been going for 15 years when suddenly the whole thing is thrown out of whack.

One of them — Serge, actually — has gone out and spent a great deal of money on a white painting with white lines on it. It's like a snowstorm with zero visibility.

The other two are flummoxed by the white on white purchase and it brings out the worst in all three — in a deeply hilarious and farcical way.

Disagreements about artistic knowledge and theory kick off the response and things quickly turn personal.

When Marc refers to the painting as a "white piece of shit," you can see it's not going to end well.

This is the premise of the Tony-and -Olivier-Award-winning play Art, written by French playwright Yasmina Reza, which is being staged in April by Between Shifts Theatre Company in Squamish.

"I read it and found I was catching myself laughing out loud in Starbucks," Hewitt says.

"There are some very, very humorous moments in it."

In all, between costumes and scenery, roughly 10 to 12 people are working behind the scenes.

Art stars Travis Woods, Todd Weitzel and Harvey Spivey. Hewitt has worked with them previously on other Between Shifts productions.

"It's enjoyable to see them bring the characters to fruition," Hewitt says. "Three handers (three-person plays), much like two handers (two-person plays), have a lot of dialogue to work through."

Hewitt adds that the play is not suitable to those under 14, owing to strong language.

"There's a lot of eff-offs in the show," he laughs. "But many people will enjoy it; there are a lot of laughs for sure.

"It has been a great ride so far. We started rehearsals in January and I enjoy working with the three actors. They brought a lot to the table. I think people should come see it because they will be in for a great night of entertainment."

The play will also be going on the road. Between Shifts Theatre will take it down to the North Shore Zone Festival in early May to vie for a spot in the provincial community theatre competition run annually by TheatreBC.

Art is being performed from April 1 to April 9 (except for April 4) at the Eagle Eye Community Theatre at Howe Sound Secondary School in Squamish. Each performance starts at 8 p.m.

Tickets range from $11 to $22 and can be purchased at www.betweenshiftstheatre.com.