Henry the border collie is voiced by Hollywood star Chris Evans in Superpower Dogs
Jul 11, 2019 2:00 AM By: Brandon Barrett 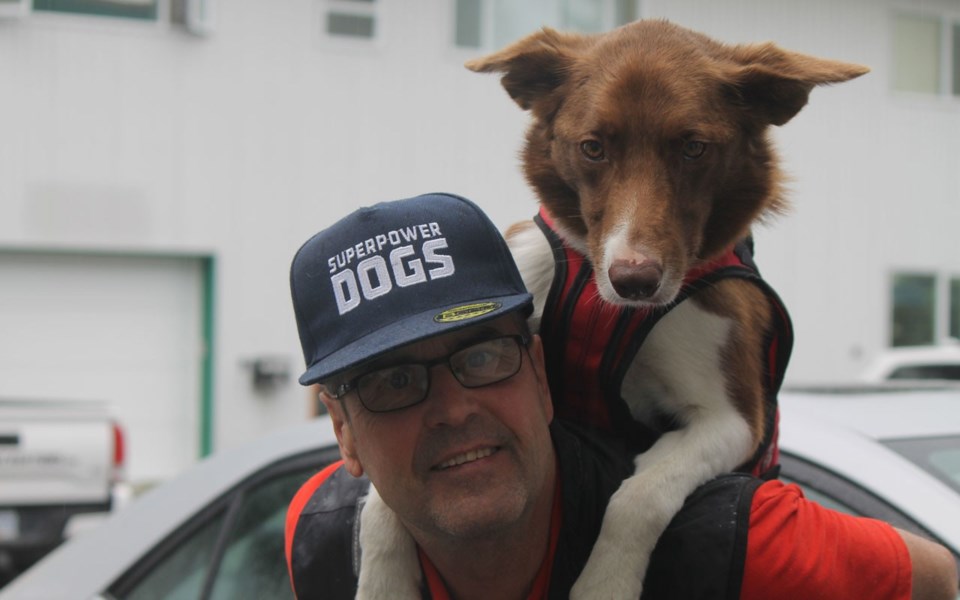 Henry the avalanche dog and his owner, Ian Bunbury. Henry is one of the dogs featured in the new IMAX film, Superpower Dogs . Photo by Joel Barde

There was one moment in particular last winter when the producers of a new IMAX film knew they had made the right casting decision.

Their photogenic star, clad in safety vest and fire-truck-coloured goggles hung over his silky, reddish-brown hair, sat perched, stoically, at the top of a picturesque slab of Whistler Mountain informally known as Kodak Rock.

"Immediately the public started snapping photos, and Henry was just striking his pose. (The film's writer-director) Daniel Ferguson looked at me and goes, 'We've got the right guy for the role," says Ian Bunbury. Henry, as it turns out, is not your average movie star. The star of Cosmic Picture's IMAX spectacular, Superpower Dogs, Henry is a seven-year-old border collie who is one of only 25 specially trained avalanche dogs in the country.

Voiced by Captain America star Chris Evans, Henry serves as the narrator of the 47-minute film, which follows six dogs and their human partners as they brave natural disasters, protect endangered species from poachers, and assist people with special needs.

Bunbury, Henry's trainer and devoted companion, says he was first approached by the production team back in 2014. The crew sat in on a Canadian Avalanche Rescue Dog Association course that winter, looking for the right dog to fit the character they had envisioned. Henry fit the role to a tee.

"He's got a certain character about him that fit what Daniel was trying to portray. He wanted a mature dog that had a sort of been-there-done-that mentality, who could show the young guns how to do this job," Bunbury recalls. "When you see the film, you'll see that come through in Chris Evans' narration. He's sort of the wisecracking old hand at the job."

Along with serving as the anchor of the story, Henry is the daredevil of the film's canine contingent, dangling from helicopter longlines and riding in between Bunbury's skis as they rip downhill. The film is a visual feast, replete with slick CGI effects and the kind of awe-inspiring shots IMAX is known for.

"The digital effects they have stuck on this, the dogs are coming right off the screen at you," explains Bunbury, who adds that the film employed a 280-degree camera to mimic a dog's range of sight. "At one point, you're actually a scent molecule and you get sucked into the dog's nose and past the scent receptor. It's amazing."

But, as most Whistlerites should know, the work of an avalanche dog is far less thrilling than it may appear on a towering, five-storey IMAX screen. The training, particularly in the first two years of the dog's life, is rigourous, to say the least, with Bunbury using treats and engaging, structured games to incentivize behaviour. It goes without saying that an avalanche dog and his trainer spend countless hours together, a dynamic that sits somewhere between teammate and beloved pet.

"We're inseparable," Bunbury says. "When I say I spend more time with this dog than I do with my family, it's not because I'm bragging. It's just the way it is. We're virtually together every day, all day."

One of the more harrowing days on the job for Bunbury came back in 2017, when Henry discovered a 33-year-old Vancouver man, who had died in an avalanche near Hanging Lake.

"Now that I'm getting older and I've been on the scene of a few of these, as well as what I'm exposed to in my job as a ski patroller, I like to say it leaves a mark on me. I'm damaged to a degree, but I cope," says Bunbury.

Given the short window rescuers have to reach avalanche victims—Bunbury says the chance of survival drops by 90 per cent after 30 minutes—there has only ever been one successful "live find" by an avalanche dog in Canadian history, nearly 20 years ago in Fernie. Still, that doesn't damper Bunbury's passion for the job.

"If you had told me when I started this in 1993 that, 'Ian, you're going to put in all this time, all this money, all this energy to train a dog, but you're never going to get a callout,' I still would've gone, 'Yep, sign me up,' because I love dogs, I love working with dogs, and the possibility that I may save a life one day using a different species animal, and we're going to save a life together, to me, that's enthralling," he says.

As for Henry, who has made an unlikely star at movie premieres, attracting lines hundreds deep just to snap his photo, Bunbury says he has yet to let all the attention go to his furry head.

"This is his 15 minutes of fame," Bunbury says with a chuckle. "He doesn't talk about it much, he prefers to keep it under wraps."

Superpower Dogs is playing now at the Omnimax Theatre at Science World in Vancouver, as well as at the National Geographic Theatre IMAX Victoria.