Teams from across North America will be Whistler to compete in the national championships this weekend
Jul 29, 2011 8:33 AM By: Stephen Smysnuik 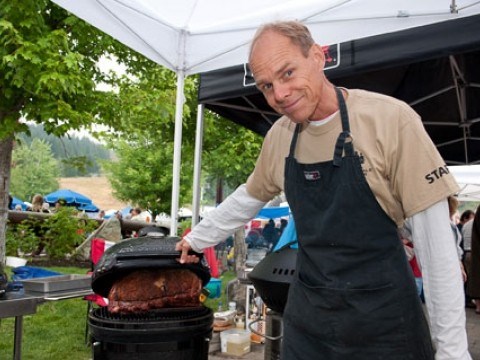 For three days this weekend, barbeque will dominate Whistler. We're talking the best barbeque North America has to offer, as some of the finest, most skilled and most creative barbecue chefs travel to these here mountains to compete in the Canadian National BBQ Champions.

This is one of the premier Canadian barbeque events, sanctioned by the Pacific Northwest Barbeque Association and drawing in around 70 teams from across Canada and the U.S.

"Whistler's the Canadian championships. It's the grand poobah. It's the big one," says 2010 grand champion winner Rob Reinhardt of Prairie Smoke & Spice BBQ in Saskatoon.

The competition runs from Friday to Sunday. Saturday will see the 10th Annual Backyard Burger Championship, the C.A.S.I. International Chili Championship and the 10th Annual Budweiser King of the Grill competition. Sunday's the day of the turn-in, starting with the pork butt, followed by the Ravenswood 4th Annual Cork & Pork, beef brisket, chicken and ribs turn-ins.

For chefs, this is a chance to sample the tastiest barbequed meat from the most talented cooks this continent has to offer. For a $5 donation to charity, visitors will receive a pass to sample from all the competitors.

For the cooks, Whistler is considered one of the most beautiful spots to cook in - an obvious statement, sure, but it's because of the scenery that people from all over are willing to make the drive here, drawing large numbers of teams year after year.

"A bigger event tends to bring everybody's competitive juices to the surface," Reinhardt says. "The cooks that come to these things are kind of a big community. We're all friends with each other. It's all high fives and happiness."

Danielle Dimovski of Diva Q in Barrie, Ont., says these competitions are all about the sportsmanship, where contenders treat each other as part of a community rather than as enemies. Cooks residing in the area will help out their out of town compadres by lending them barbeques, tents, tables and the like.

"It's a very unusual sport in that there is such a level of camaraderie," Dimovski says. "I am out to win every single time, make no mistake about it. However, I do not ever want to win because someone didn't have something. It's a honourable way to compete."

It's this competitive spirit, she says, that makes it such a draw for the cooks and, as a result, a positive experience for everyone else who attends.

Geographically, barbeque enthusiasts span a massive area and in North America there are roughly 6,000 competitors.

As for Reinhardt, this will be his third season of barbeque competitions. Last year in Whistler he won three of the four meat championships, an unprecedented victory for an event this size. Those wins helped him secure the grand championship title.

"You need to have a good idea of what the judges are looking for," he says. "A lot of these teams will take the judge training course to learn that (but) everybody has a different flavour profile. You still have to cook it to the perfect tenderness, still have to make it look really good because you get judged by appearance. But assuming teams have that down it's just trying to nail the right flavour profile."

He's talking a little bit of sweets, a little bit of tang and vinegar and some smoke flavours to round it all out. Reinhardt's hoping for a second consecutive win but he admits with a chuckle that he has nothing new up his sleeve.

"No, I'm coming in with the same plan as last year. I'd be crazy to change it up too much."

He adds: "I just enjoy the cooking, you know. You can't beat cooking outdoors, drinking beer and hanging out with your friends all week. You might as well get some prize money out of it."