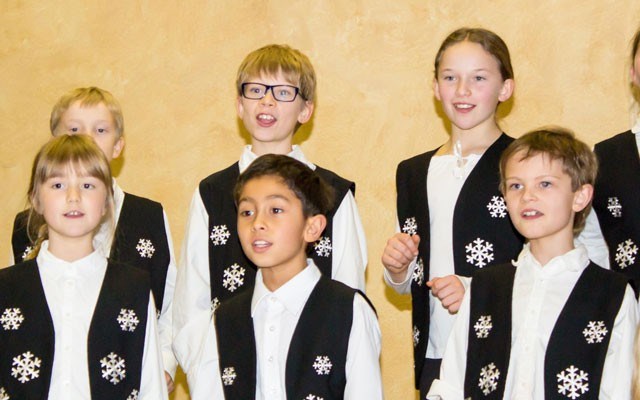 whistler Childen's Chorus Part of 'An Evening of Readings and Carols' on Dec. 24. Photo Submitted

What's your favourite? "Little Drummer Boy?" "Oh Come All Ye Faithful?" Would you prefer to hear some seasonal stories or classical music?

Whistler has a lot of variety, with three events to choose from.

A Classical Christmas, chamber music by harp, flute and violin for the holiday season, takes place at The Whistler Museum on Saturday, Dec. 20 at 4:30 p.m. Admission by donation to the museum.

A Whistler Christmas, with music by the Whistler Singers and readings by local writers, takes place at Millennium Place on Monday, Dec. 22, at 7:30 p.m. Tickets are $12 for adults and $7 for children.

"We're going to sing 'Six White Boomers' for all the Australians, because they are far from home. I have writers Libby McKeever, Karen McLeod, Steven Vogler, G.D. Maxwell and Sara Leach reading something about their views of this time of year," says director Alison Hunter.

"And everyone gets to sing the traditional carols. It's a very grassroots Whistler concert."

Finally, the 31st annual Christmas Eve Service of Lessons and Carols takes place at the Westin Resort on Wednesday, Dec. 24 at 6:30 p.m. This is an interdenominational carol service with carols and a local reader.

"Chris Quinlan will host again this year and everybody sings... It's very traditional; there is no Santa in sight or reindeer. Nothing commercial," Hunter says.

Two tiers of Pemberton Festival tickets — out of five made available a week ago — have sold out.

Tickets can be purchased at www.pembertonmusicfestival.com.

A Victoria super fan of the Whistler Film Festival (WFF) has scored two gold passes after watching 17 films in four days during the five-day festival earlier in December.

Harris gets two gold passes for the 15th annual festival, which is scheduled to take place Dec. 2 to 6, 2015.