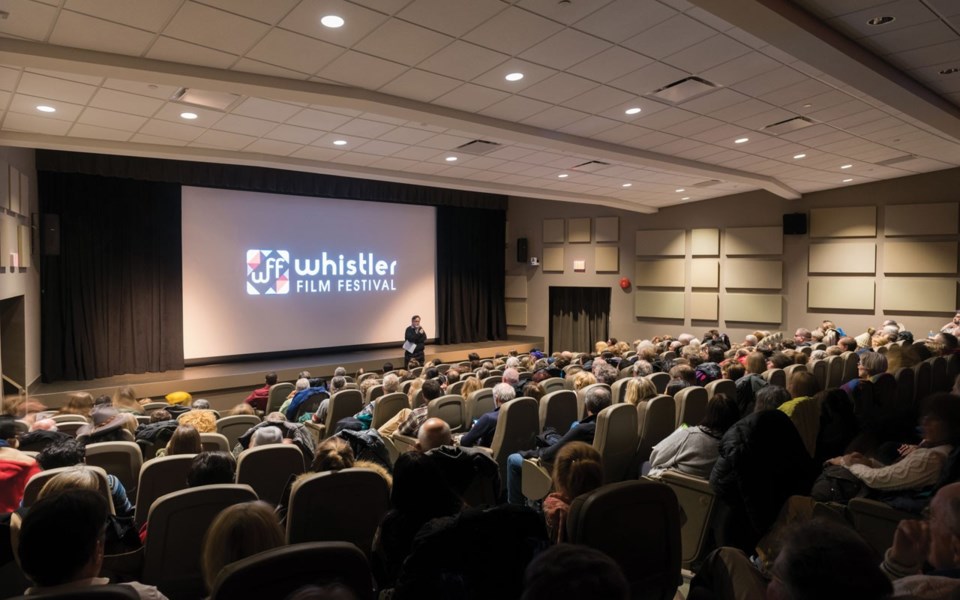 Paul Gratton, director of programming for the Whistler Film Festival, addresses the audience before a film. Photo by Mike Crane/ Tourism Whistler

With 86 films screening as part of the Whistler Film Festival's 19th edition, it can be hard to choose which to highlight.

Instead, Paul Gratton, the festival's director of programming, points out a number he's particularly proud of.

"There are 14 world premieres," he says. "The most exciting thing for me is the extent to which we're getting these world and North American and Canadian premieres. As a proportion of our films, it's enormous."

Running from Dec. 4 to 8, the films—43 feature-length and 43 shorts from 15 countries—are also two-thirds Canadian. "That's been pretty constant with the Whistler Film Festival," Gratton adds. "It's a source of great pride."

The films run the gamut from documentaries to mountain culture, indie and Canadian offerings and they were all selected from 800 submissions with a Whistler audience in mind.

"We try to stick to the kind of films I like, which are films that will find favour with an audience," Gratton says.

One of those is Cabarete, a film about a kite surfer in the Dominican Republic. "It's a fictional film about this talented kid who hangs around the beach and hustles tourists of the Dominican Republic, but he enters this contest for kiteboarding, which is a sport I don't even know about," Gratton says with a laugh. "There are dozens of colourful kites, this beautiful green water, the blue sky—and we've got the world premiere."

Another premiere he's looking forward to is Katharine O'Brien's Lost Transmissions, which will open the festival with its Canadian debut. Simon Pegg (Star Wars, Mission Impossible, Star Trek), who stars as a schizophrenic musician-turned-producer will be in attendance, alongside O'Brien.

"We're very happy with the celebrities coming this year," Gratton adds. "Getting Simon Pegg for opening night and Chelsea Peretti ... is an incredible talent in her own right. We'll be handing her a Trailblazer Award."

Peretti will be starring in the film Spinster—which will be premiering at the festival—about a woman in her late 30s who's dumped by her boyfriend and goes on a quest to find love through a series of blind dates.

Not all the films are premieres, though. Compulsive Liar/Menteur, for example, was making huge waves at the Quebec box office when Gratton drove from his home in Toronto to Gatineau, Que. to see what all the fuss was about. That story is about a compulsive liar who suddenly finds all of his lies happening in reality.

"It made $6 million at the box office and only played in Quebec," he says. "I sat with a couple friends and we were holding our sides it was so funny."

The levity is an important addition to a lineup that often tackles tough topics. "There is a lot of heavy stuff in the themes this year," Gratton says. "A lot deal with mental illness, Alzheimer's, breast cancer ... The other theme is moral rage towards women and toxic masculinity. We have three or four films on that."

Another outside-the-box offering this year is the restored version of The Grey Fox, a 1982 film about an aging stagecoach robber directed by Philip Borsos, who the festival's Borsos Award for Best Canadian Feature is named after.

"That's probably the greatest movie that's ever come out of Western Canada," Gratton says. "It's been out of circulation for a while. The producer, Peter O'Brian, personally oversaw the restoration and we're showing it for the first time."

For a complete list of the films—and to buy passes and tickets—visit whistlerfilmfestival.com.

"The most exciting thing for me is the extent to which we're getting these world and North American and Canadian premieres," Gratton says. "It relies on the support of the people of Whistler. Come out and buy tickets and make sure the theatres are full."