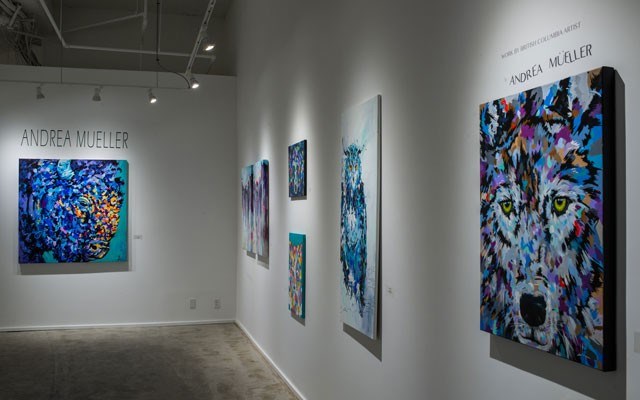 Whistler artist Andrea Mueller's new show — Love, Lust and Other Decent Stuff — at the Crystal Gallery is a first for her.

With it, she passes the milestone of having the first solo exhibition of her work, with 40 paintings on display.

And she was very deliberate in making this happen.

"Every January and February I set new intentions for myself for the coming year. One of them for 2014 was to apply to have a solo exhibition," Mueller says.

She was still trying to find out how to do this and assess possible locations when she received an important call.

"Robyn (Savage, the manager) at The Crystal Gallery called in September and asked me if I would be interested in having an exhibit in their space. Of course I jumped on the opportunity and was thrilled to be asked," Mueller says.

To be ready for the show's Jan. 18 opening (the show runs in Whistler Village until Feb. 18), Mueller had 20 paintings ready. She completed a further 20 in the two-month run up.

"When I first agreed to do the show I hadn't seen the entire gallery. After I agreed and saw the space I have to admit it was daunting but I really wanted to make it happen," she recalls.

This meant painting every night after work for five or six hours, and six to 10 hours almost every weekend. Family friends also let her use their cabin in Sechelt as an artist retreat.

"My snowboarding has seen the brunt of this as I have only made it up the mountain three times this season. Thankfully, our lack of snow is made this less painful," she says.

Mueller encourages other artists to take the risk, even if it frightens them. She acknowledges the daunting nature of it.

"A show like this has really meant a lot to me in terms of my progression as an artist," she says. "For me, showcasing this many paintings in a large space that is open to the public feels almost like I could be standing naked in the middle of the village square listening to everyone talk about me.

"Putting yourself out there is scary at first but once the artwork is up and you stand in the gallery or even a coffee shop and look around at everything you have created, there is a huge sense of accomplishment no matter what people think about the art."

Mueller's paintings vary from a very tight-line work in a pop-art style, to flow-method work that she says is about "expression and release." There are also the almost pixelated animal portraits that she is best known for, using her hands and fingers to make the marks.

"A friend who helped set up the show commented that it was like looking at the different facets of my personality," she says.

There were almost 200 people at the opening reception, and since the show opened she has already sold several paintings.

Savage says the exhibition is also a first for the gallery, the first time they have featured a Whistler-based artist since opening the doors just over a year ago.

The Crystal Gallery intends to feature a Whistler artist on a monthly basis from hereon in, she adds.

"I've been part of this community for six years, and I wanted to give Whistler artists a cool space to show their art," Savage says.

"I personally love Andrea's work. The space in the gallery is quite contemporary and her art works so well in there, the colours and the vibrancy."

The Crystal Gallery is open from Thursday to Sunday, noon to 6 p.m.