Derek Westerlund and the crew from Nelson, B.C.-based Freeride Entertainment are screening the fifth instalment in their New World Disorder mountain bike film series in Whistler this Sunday evening.
Oct 8, 2004 2:35 AM By: Pique Newsmagazine Staff 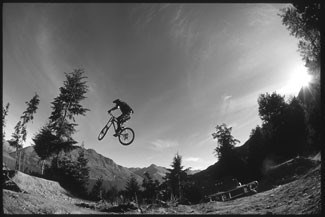 Disorderly Conduct plays to all ages in the theatre at MY Place at 8 p.m. then moves over to Garfinkel’s for another screening and premiere party featuring AC/DC tribute act BC/DC.

The film’s screening falls on the eve of the official end to the 2004 season for the Whistler Mountain Bike Park, which is closed for the season as of Tuesday, Oct. 12. Although, after a night on the Highway to Hell with Angus Hung and the rest of his BC/DC bandmates don’t expect to be in any shape to huck your carcass down A-Line the next day. You’ve been warned.

Tickets for Disorderly Conduct’s MY Place screening are $8, available through TicketMaster. For more information call 604-935-8410.

Other mountain bike madness marking the end of the season:

The GLC will be giving away a stylish Kona Hot Rod Chopper bike between 4 and 8 p.m. on Sunday at a season ender party that features legendary local rockers the Hairfarmers. On Monday evening the club hosts the Whistler premiere screening of mountain bike film Eastside Freeride II: Live Sessions.