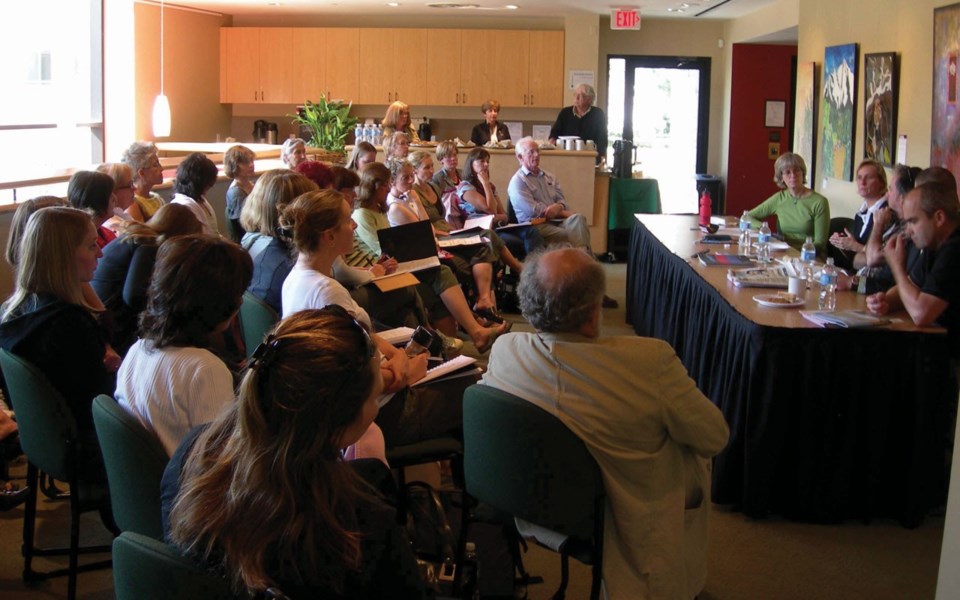 write stuff The Whistler Writing Society gathered for its 2017 AGM. photo from archives

The Whistler Writing Society—which organizes the Whistler Writers Festival—is hosting its annual general meeting on Aug. 22 from 6 p.m. until 7 p.m. at the Whistler Public Library. That event—which will include "pizza, camaraderie and local literary updates," according to the society—will be followed by a free writing workshop with award-winning author Rachelle Delaney.

Called Embracing Beginnings, the workshop will focus on "beginner's mentality," including how to find new ideas, shaping those ideas and turning them into coherent stories.

Delaney—a multi-award winning Vancouver writer with several novels for young readers to her name—has also taught fiction and nonfiction workshops to writers of all ages.

The workshop will take place at the library from 7 p.m. until 9 p.m.

The final deadline to submit a film to the Whistler Film Festival (WFF) is quickly approaching.

Filmmakers must have their film in for consideration by Aug. 15. This year, the festival will have seven juried competitive categories with a total of $146,500 in cash and prizes up for grabs.

For more information, or to submit, visit whistlerfilmfestival.com.

There might be plenty of ticketed arts and music events around the Sea to Sky corridor over the summer, but did you know an impressive range of artists are also playing free gigs around the Village Stroll as well?

Arts Whistler's Whistler Street Entertainment program has been stationing local and Vancouver artists around the busy walkway over the summer months. While many people will happen upon these unexpected performances, you can also plan ahead to attend.

Alt-rock act The Combat Dolphins are playing from 3 until 5 p.m. and again from 4:30 until 5:30 p.m. at the gazebo while Vancouver's Erica Dee and Tonye Aganaba are capping off the day in Village Common from 3:30 to 4:30 p.m. and performing again from 5 to 6 p.m. In between, catch live painting, a free craft station and juggling/music/comedy duo Duncan and Scott in Village Common from 1 to 6 p.m.

Meanwhile, Erica Dee and Tonya Aganaba will also return with their DJ and live music combo, performing near Olympic Plaza from 2 to 3 p.m. and 4 to 5 p.m. Find the craft station near Town Plaza from 1 to 5 p.m., and face painting from 1 to 5 p.m.

Duncan and Scott will be stationed at Village Common from 1 to 6 p.m.