Whistler group returns from volunteer work in school and farm in Namibia, Africa
Jul 27, 2007 8:22 AM By: Nicole Fitzgerald 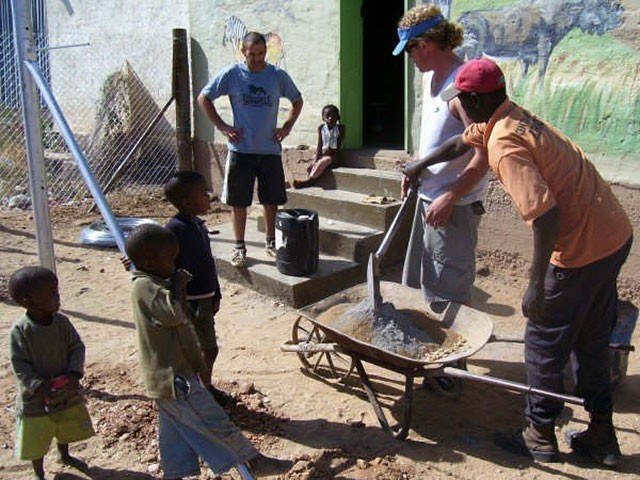 Snapshot of Africa A Whistler group of volunteers share stories of community building from their recent trip to Namibia, Africa.

What: Whistler to Namibia

When Jill Marie Stokes visited Africa to volunteer time and resources to two communities in Nambia she expected to find everyone housed in mud huts and people on the side of the road. Instead she found paved streets, billboards and shopping malls.

“We were in for culture shock, I remember thinking, ‘Oh my god, this is Africa?’” she said, laughing. “All I was expecting was mud huts. I guess it was like people expecting us to live in igloos here.”

Insights and images into the emerging and developing Africa along with nine of her other team members will come to light in a narrated slide show Sunday, July 29 at 4:30 p.m. at MY Millennium Place.

“As a group, you can go over there and volunteer your time, but it is not until the local people catch their vision and put it into their own actions that things begin to change.”

The group of current and former Whistlerites planted and painted that seed of change after spending three weeks abroad, visiting the capital of Namibia, Windhoek, to aid a school and then a northern town called Tsumed to foster the growth of a community farm.

The idea to trek across the globe was inspired by a group of volunteers in the community who wanted to make the most of their shoulder season downtime. A discussion with someone who was involved in Bicycles for Humanity, a charity organization that collects used bikes and ships them to communities in need, led to the group discovering the African communities.

The group hosted a series of shows, concerts and garage sales to raise funds for the two communities and soon the group was traveling half way around the world to lend a helping hand to a capital city wielding 250,000 people with 40,000 children orphaned by AIDS.

The group painted, cleaned yards and built fences at a pre-school daycare centre in Katutura, so kids once playing amongst tin scraps in an area infringed upon by the general public could safely play during recess.

“It was in the poorest neighbourhood,” Stokes said. “We built a fence and a playground. It was exposed to everyone walking through before, with broken glass everywhere. It wasn’t safe for kids to go outside.”

The troupe then moved north to supply a farm project in Tsumeb started by volunteers housing 35 orphans and running a school of 90 children to feed the community. Monies from Whistler fundraisers were used to purchase pigs, sheep, goats, fruit trees, vegetable seeds and chainsaws to help clear the property — they had already spent three months chopping down trees by axe to make way for a fall planting.

“The farm met the basic human needs of food and to becoming a more sustainable community,” she said. “We bought wheel barrows and chainsaws to get the workers up and running for the planting season.”

The stories shared during the slide show move beyond the group’s acts of kindness and instead give insight into Africa, the effect of aid agencies and the people they met. Sometimes heart warming, other times revealing, the group wishes to share how Africa and they themselves grew from the experience.

Their relationship with the communities continues. One of the group members, Kelly Mabey, along with Stokes, have started a Bicycles for Humanity chapter in Whistler and are organizing used bikes to send a shipment to Tsumeb in the fall.

Admission to the slide show is free.

To donate a bike, visit bicycles-for-humanity.org.