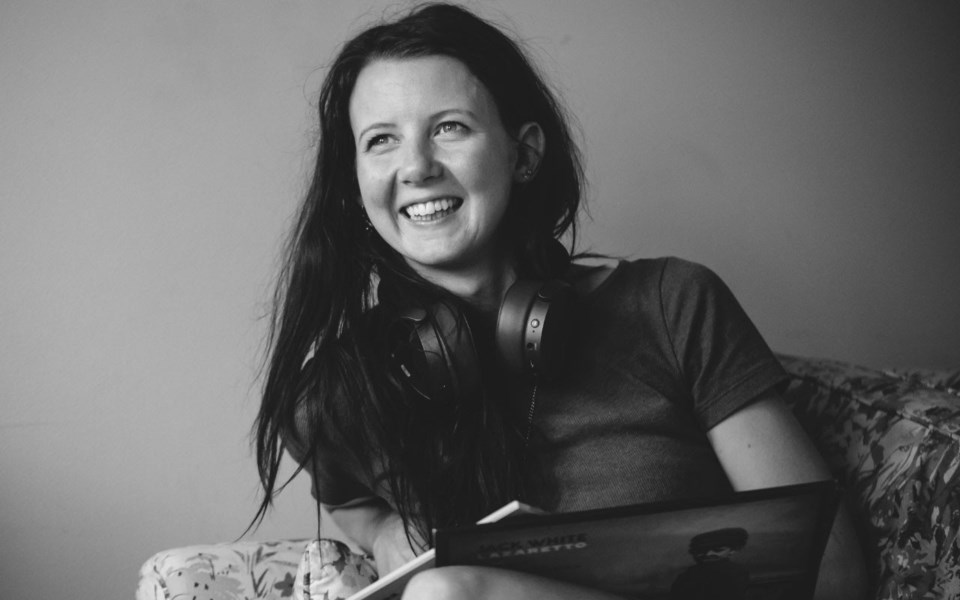 Whistlerite Alex Rochester shared one of her stories about her time as a ski instructor on the popular podcast The Moth. Photo submitted

Former Whistler Blackcomb (WB) ski instructor Alex Rochester drew on the starpower of some familiar celebrities when trying to inspire a group of gun-shy girls facing their first black-diamond run.

"Obviously other people in other areas of life have done this, but my male ski instructor (colleagues) had clearly not used Taylor Swift to empower their kids," explains Rochester, who shared her story of ski empowerment at a storytelling event that was released last week through the popular storytelling podcast, The Moth.

Counting upwards of half a million downloads a week, The Moth has featured such luminaries as actors Molly Ringwald and Ethan Hawke, writer Malcolm Gladwell and civil-rights activist Al Sharpton. But it's also become known for sharing the stories of everyday people like Rochester, who competed at The Moth StorySLAM event while staying in Nashville last summer.

The former Whistler FM producer told a story about a particular group of seven-year-old girls who all sported "pink and purple ski jackets and loved to talk about the American Girls' dolls and Taylor Swift—a lot."

Rochester was trying to figure out how to inspire the girls without taking the typical tack used by many of her male snow-school colleagues.

"I had been taught by male ski instructors to be aggressive and to want the biggest, fastest, gnarliest, steepest line, while also competing for who had the best turn shape," she says. "I was tired of competing. I was tired of it feeling like skiing was about being better than somebody else.

"Because when I ski on these frozen water molecules down these 45-degree angled slopes, I feel like I'm flying. That's what I wanted it to be for them."

So over the course of the next few weeks, Rochester would make a point of singing a trio of songs with the girls every time they rode the chairlift: Sara Bareilles' "Brave," Katy Perry's chart-topping "Roar," and, of course, T-Swift's "Fearless." She didn't explain the method to her madness at the time. "They just thought I was the weirdest and worst-singing ski instructor they had ever met," Rochester explains.

Then, one day while perched at the top of the steep, rocky run, the girls' confidence started to wane. "You want us to ski that?" they asked, pink ski boots quaking in fear. Rochester's response was simple: "I said, 'No, I know you can ski that. You know how to pole-plant, you know how to control your turn shape. You are brave, you are fearless, and you will roar!'"

This was followed by a collective roar before each of the girls conquered the run with ease. "I've seen a lot of smiles on kids' faces and there's a specific kind of smile they get when they've got two scoops of ice cream or they've met Mickey Mouse," Rochester says. "But that day, I got to see the smile when they realized their own superpowers and that they could do something, anything in that moment, and that was really magical to see."

Rochester ended up winning that night's StorySLAM event, sweet revenge for coming up second at the previous month's competition. Rochester, who now works as a baker at Nita Lake Lodge, fills the long, early-morning hooiurs by listening to podcasts—The Moth included.

Having competed at several storytelling events now, Rochester says it's an artform that has helped her appreciate the uniqueness of Whistler.

"In this town, because it's such a bubble and it becomes so normal, we forget how special this place is and the opportunities that this really weird collection of people can produce in us," she says. "In listening to The Moth and in sharing stories, I think it's demonstrating that there's an opportunity in every situation to make the best of it and make it a learning situation. That's what I really love: I love learning, and everything is a learning opportunity for me. So, from this, those kids learned a lot about themselves, but I also learned a lot about myself."

Rochester remains in touch with the girls she first met in the 2014-15 winter season, and talked about how being a ski instructor helped her find her place in town.

"Teaching kids in this town really made it feel like home for me because you got to see what you could do," she says. "That is really a testament to Whistler Blackcomb ski school as well and the training I got. It wasn't just about teaching people to ski, it really was about it being a life experience and hugely impactful to children if you encourage it to be so, and that really stuck with me."

The International Women's Day-themed episode of The Moth can be found at themoth.org or wherever you get your podcasts.