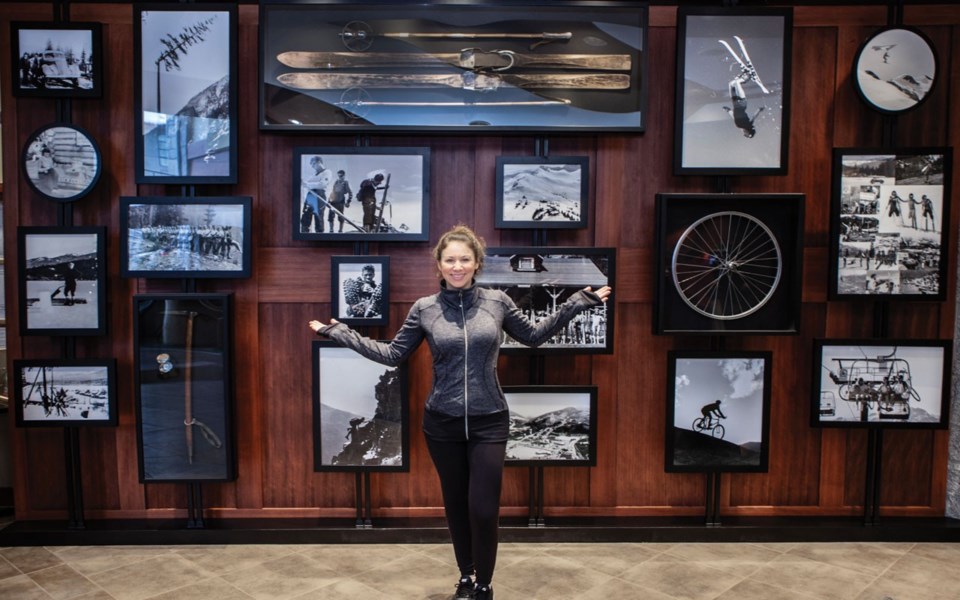 Whistler's wall Desirée Patterson poses next to the installation she created for the Crystal Lodge. Photo submitted

There's one piece in particular of the new art installation at the Crystal Lodge & Suites that stands out to Ian Lowe.

"Me personally, what I found funny was when (artist) Desirée (Patterson) sourced a vintage 1985 mountain-bike tire that's part of the wall. I looked at that thing and I know I rode on that rim," Lowe says, with a laugh commenting on how mountain biking is very new to local history.

As the general manager of the village hotel—and a long-time local—Lowe decided he wanted to use an empty wall space to showcase the resort's history in the busy lobby. So, last spring, he contacted Patterson, a Vancouver photographic artist who called Whistler home for many years, to see if she could help.

"I saw this consistency of this adventuresome spirit in all these people that pioneered coming up to Whistler and started the first fishing lodge all the way up to wanting the ski resorts to be developed," Patterson says. "It seemed like the people that were attracted to come live there—or attracted to come ski and enjoy sports there—it just seemed there was this kindred spirit. That's what I wanted to convey in the image I chose."

It was no easy feat to select those images, she adds. For that, Patterson spent hours at the Whistler Museum poring over photos and consulting with John Alexander, the collections manager there. "I spent so much time with them, selecting files, transferring files, learning about the chronological timeline—sifting through thousands of images," she says. "Whistler is very rich in pictorial documentation. It was easy for me to get lost in all of these fantastic images ... A big part of the passion of this project was fuelled when I started going through the archives. I have a huge love for Whistler because I lived there."

The pictures she chose include a range of sports—from climbing to skiing and biking—as well as both men and women. "One thing I noticed in the archives was the amount of ladies that settled up here early," Patterson says. "I saw so many (pictures of them) hiking up here in dresses."

Also in the mix is the beloved Toad Hall photo with freewheeling squatters decked out in ski equipment—and not much else. That image—along with the installation as a whole—has prompted questions from guests, Lowe says. (Also, because it's displayed in public, the ski bums' bathing suit bits are artistically covered up, he adds.)

"That's the most questioned," Lowe says. "But they also wonder why there's a 1940s car on a rail track. If someone digs into the story, that's so fascinating. There were no roads until the 1960s ... All these stories behind the pictures have been what's really fun."

For her part, Patterson says the project has been the most challenging of her career as an artist. Not only did she select the images but she was also tasked with designing the display. "I had to have trust and faith in the partnerships I had to create to realize the whole three-dimensional installation," she says. "There were a lot of challenges in all areas. I feel like I look at it and I couldn't be more proud of it. I'm happy with how everything came out."

The installation is on permanent display in the lobby of The Crystal Lodge & Suites.