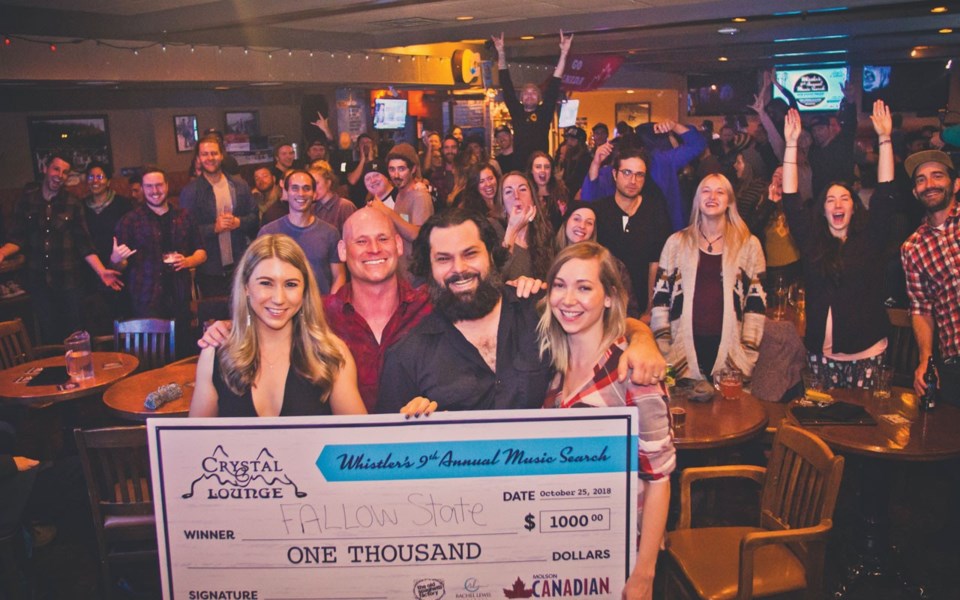 An alt-country duo with a penchant for catchy originals has won the ninth edition of Whistler's Music Search at the Crystal Lounge.

Since forming a year ago, Vancouver's Fallow State (Adrienne Nye and Christopher B. Olson) have had a productive run, having recorded a three-song EP, written seven original songs, and performed over a dozen shows.

"This was a nice way to cap off a really awesome year," explains Nye, days after the big win.

During their set at the competition's Oct. 25 finale, the group played three originals and one cover. Nye says that while she recognizes playing originals can be risky (people tend to like what they know), the duo loves sharing them—and the crowd seems to enjoy it as well. "We really love the music we've created together," says Nye.

The duo has been friends for the past several years, having met at an acting class in Vancouver. "We'd go for beers after class and we'd always talk about music," she says.

(Olson continues to act, while Nye has since chosen to focus on other endeavours, including music.)

The pair also shares something else in common: a background in musical theatre. "We kind of had a similar trajectory in terms of being child performers," explains Nye.

She says that there have also been more talent contests around the province of late, and the band enjoys taking on the challenge. (This summer, they took part in the Anza Live Community Showcase, which, she notes, regular Whistler performer Matt Hoyle ended up winning.)

"There's lots of similar competitions going on, especially since Music BC and Creative BC got government grants," she says. "Whenever you are in a mix like that, it's usually your friends that are up there. It never really feels competitive. It's more (about) community, gunning for people to have opportunities to further their career."

Summing up the decision to crown Fallow State as this year's music search winner, judge and Crystal Lounge manager Oliver Nudds says the band offered a certain je ne sais quoi. "We were looking for something a bit unique, that captivated the audience," he explains.

Nudds notes that the event is popular, with participants travelling from afar to take part.

One competitor, Ryan C. Sawka, came up all the way from Interior B.C.

"I was waiting for him to send me a message. He shot me a message and I instantly said 'yes,'" says Nudds with a characteristic laugh. "I said, 'You can have as many shots as you like. You're coming from a very long way away.'"

(Musical shots, that is.)

Nudds says he views the competition as a great opportunity to showcase new talent in and around Whistler. "This time of year we have a lot of new people joining the community, and it just opens (us up) to a lot of talent," he says.

He adds that he feels it's important for the Crystal, which hosts a jam night every Sunday from 9 p.m., to provide a platform for emerging artists.

"It's a great opportunity for amateur artists to get involved in the local scene," he says.

Mike Belanger, Fallow State, and George were all finalists in the music search. Helen Hamilton took home second place (and a new guitar), while Mikkal Waters won the Dave Morris Award for Originality in Music.