Whistler's The Point the place to be for art this summer, especially if you're a kid

Expressive art workshops offered throughout the summer
Jul 5, 2012 8:00 AM By: Stephen Smysnuik 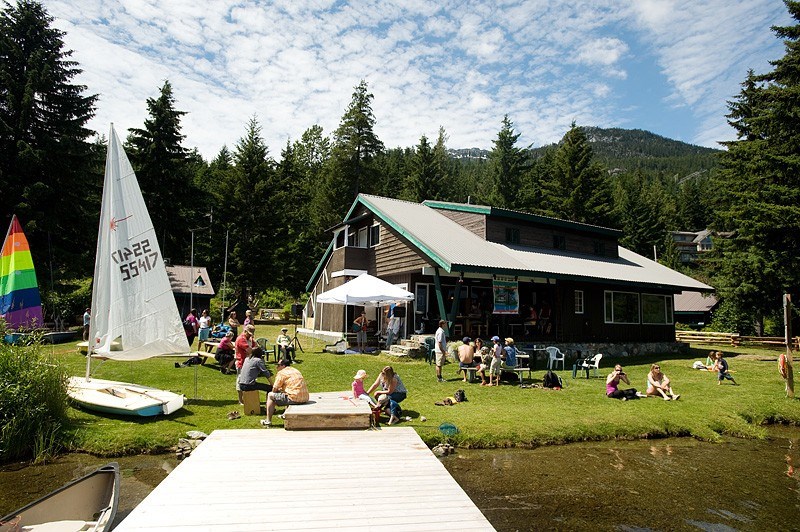 Pablo Picasso once said that all children are born artists. The trouble is remaining one as they grow up.

This summer, The Point Artist-Run Society is offering workshops targeting children's creative gusto. It will be offering everything from jewelry design to lessons in songwriting - all at the helm of local artist/musician/actor/jeweler Aude Ray.

Ray, who teaches extracurricular expressive art workshops at Ecole Passerelle and Ecole Vallee de Pemberton, will guide all the participants and aid them in cultivating their ideas from start to finish. But where most people stick to their own areas of expertise, Ray dabbles in a whole lot of everything.

Her work life has consumed most of her time, so her personal projects have taken a back seat over the past year. She's not writing as much music as she'd like, but she gets out from time to time. She met Stephen Vogler, founder of The Point, at an open mic night and, eventually, pitched the idea for a series of summer workshops

Born in Quebec, She studied theatre at Conservatoire Lassalle in Montreal before travelling the country. She eventually moved to Powell River, working with francophone schools teaching expressive art. She then moved to Vancouver and, prior to the Olympics, was offered her current job in Whistler.

Throughout the winter, she teaches music lessons out of her Emerald home. The Point's summer workshops are an extension of what she's already been working toward - educating children into creativity rather than out of it.

"The expressive arts help them communicate, they help build their confidence," she says. "Kids have such amazing ideas all the time, it blows my mind. I guide them but most of them have their own ideas. It makes me feel like one of them. It keeps me young."

During the five-week workshops, participants will take their own ideas and, with Ray's guidance, bring them to fruition (while the workshops run for five weeks, they do accept drop-ins as well for $20 each). In Musical Exploration, Songwriting, kids will learn how to write songs, sing and the basics of different instruments. In Theatre, Costumes, DŽcor, participants will create an original play, complete with costumes and a set, which will be then performed at The Point's Flag Stop Festival on Aug. 11.

Vogler had been dreaming of artist-run centre for years, a place where artists the public could interact with artists while they work. When the youth hostel left its location on Alta Lake last summer, Vogler pitched the idea to the RMOW, which owns the building. They OK'd the project on a trial basis and, throughout the summer of 2011, Saturdays at the Point featured live music, poetry readings, a book sale and a other events that served as a necessary building block for Vogler's grand vision

"It is an ongoing, gaining trust type of relationship both with the municipality and with the community, so I'm still cautiously optimistic that this could turn into a long-range home for an artist-run centre," Vogler says.

The RMOW has allowed The Point to use the space for more days per week. Saturdays at the Point will return this year, with expanded programming that includes the workshops (as well as Ray's five-week improve workshop, beginning Tuesday, July 10, and Rebecca Wood Barrett's five-week Feeding the Seed writers workshop, beginning Thursday, July 12), the TRACKS art show - a summer long exhibit featuring local artists working on canvas, in photography, sculpture, skateboards, you name it - and the Flag Stop Festival.

Vogler says, "For decades I've wanted to do a real homegrown, but good quality arts festival that really speaks about this place and really involves the community and the visitors, but comes from the creative people in this town themselves to see what we can put on."

The festival will include a play that Vogler penned, Agnes, about Agnes and Bert Harrop (waiting on proper spelling) who originally lived on the spot where The Point exists today. Lilli Clark and Angie Nolan will star in the play (the two male roles have yet to be filled, FYI).

Everything that The Point produces has been cultivated from the ideas of the artists involved with the centre, of which there are many. Whistler is rife with artists hungry for collaboration and The Point so far has provided fertile soil.

"I just roll with what ideas come forward and try to incorporate it. It's a very organic, falls into place as it moves along type of organism," says Vogler with a laugh.

For more information about the workshops and other future events, visit www.thepointartists.com