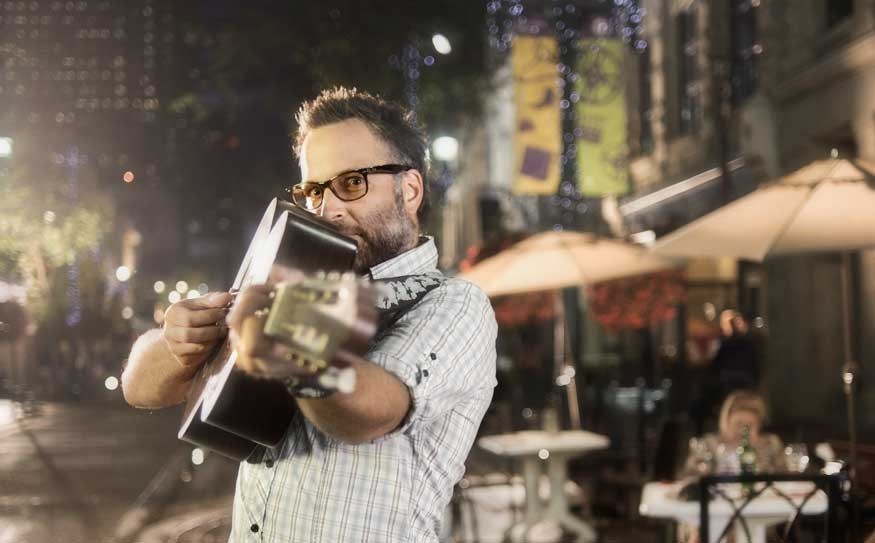 Wil destroys his acoustic guitars. He has no qualms about it.

He stopped "being precious" about his instruments years ago, after being forced to retire one every couple of years due to his particular style of playing. Anyone who's seen Wil play knows the Calgary-based roots-rock musician is prone to impassioned, spirited strumming that no string can withstand for very long.

While some musicians consider their instruments extensions of their appendages, for Wil the guitar is merely a tool to communicate a message.

"Ultimately, my relationship with it is, it's there to serve its purpose for me, and I'm not going to slow down and mellow out. I just figured out that's who I am," he says.

His wife now makes jewelry out of his broken strings and sells them at the merchandise tables at all his shows. But these shows aren't merely rigorous displays in instrument thrashing. Wil's a dynamic performer balancing out the intensity with moments tender enough for a Paul Simon show.

Yet even the softer moments are imbued with a passion that's normally reserved for punk rockers — it's the sort of emotive gusto that's transmitted to the audience, whether you like it or not. You get the same sort of rush watching Wil perform as you might get from watching a 100-metre dash or the final moments of the Tour de France: it's a visceral event that we, as empathetic beings, can only be touched by.

Isn't that why we go to rock shows anyway?

"I remember once a record label guy said to me, 'You remind me of (Pixies frontman) Frank Black.' I'd never seen Frank Black and I thought he was alluding to the fact that I was bald and a bit chubby," Wil laughs, "And then I kind of figured out what he meant. It was a compliment about intensity, right. I'm not quiet. I don't stand still. I just keep pushing it out there until I get too old and it gets harder to move."

He's spent two weeks prior to this interview playing shows at the Calgary Stampede, having written the theme song for their 100-year anniversary. "Ride," a stomping, rolling celebration of all things prairie-like, was initially commissioned to be a 35-second clip that festival organizers, impressed by what they heard, asked him to complete. It's a life-affirming highlight of Canadian music in 2012 and when performed live it's enough to make your knees buckle.

Of course, you won't get a real sense of what he's bringing until you see Wil in the flesh.

The same goes, it must be said, for his recorded material. Wil is not a fan of recording albums. It's something that he's always felt "uncomfortable" with and has considered it a necessary evil in order to reach the audiences that fill the venues so that he can play in that physical space that he's talking about.

But recording is not without its bonuses. With each of his four albums he's learned a bit more about what he wants to do, and about what works and what doesn't.

"I've almost made the album that I've been looking (to make) for a long time, but I'm not there yet."

That album, which he'll attempt to make when he goes to record his fifth album later this summer, will be recorded like it was in the beginning of recorded music — mic a room and play live off the floor. Take the best cut and run with it.

"Just capture a song front to back, all in, everybody in, and that's what we grab," he says.

No word yet on when the album will be released but it'll be a bloody impassioned affair, no doubt.