WMN Studio is gone, but the dream lives on 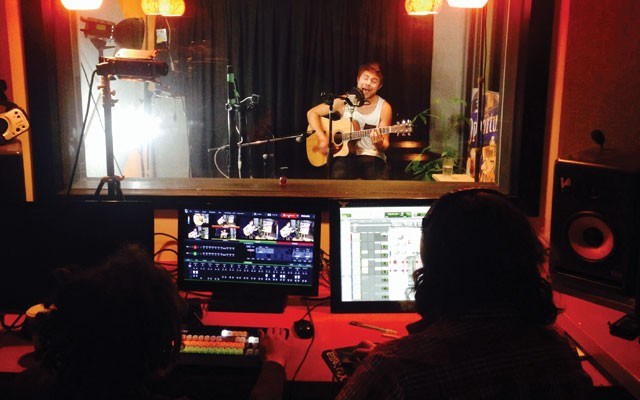 People learn by doing — that could be Steve Clark's motto. Clark opened WMN Studio in Function Junction in January 2014, with the idea of creating an artist-driven professional multimedia space for Whistler's creative community and for visiting artists looking for a place to record and create.

But in November, it closed.

"There's only positives to take from it," Clark says, as he reflects on the experience two months on.

The 610 square-metre music and multimedia studio was and remains Clark's passion project. He believed Whistler was ready for a standalone studio offering a recording room, and green screen, with room to make webcasts and record videos.

"I jumped into it and I am passion driven, there's no doubt about it. I'm an artist at heart," he says.

"It was a massive learning experience. (I learned) everything from how to manage a commercial space, to the ins and outs of building WMN to a certain (professional) point. It took a lot of work and help from people in the community."

The biggest challenge was that Clark spent much of his day earning income in custom home design, interior design and computer 3D modeling — money that went to support the studio — but also took the focus away from developing programming.

He believes WMN was costing in the region of $6,000 a month.

"I was bootstrapping it with my own income and as a result it moved at a slower pace than what people would normally like to see a business work at," Clark says.

"I wanted to do something that introduced new concepts and new ways to create revenues for artists. I want to create new products."

He recognizes that WMN Studios is an ambitious concept, but he insists it is viable.

"Right now, if you look at entertainment, there is only a certain product line that exists in town — pubs and clubs. The Point does great things and there is the Maury Young Arts Centre, but the point is there is room for so much more," he says.

Clark had started versions of WMN much earlier, a studio in Alpine and a radio project at the former Doc Brannigan's restaurant in Creekside.

"There is a realistic scenario where we bring community television and community media to life through creating jobs for artists. It can also involve local businesses and can feed a model," Clark says.

Among other programs, WMN Studios developed Craft Singles, a series for local musicians that allowed them to record singles for free; pilots for indoor sporting and games tournaments, which were televised online; podcasts, including The Morning Mixers, with interviews with local musicians and DJs; a pilot program for kids' news; private workshops for adults; and after-school programs to teach youngsters how to work in studios and produce music.

WMN Studio developed events that took place at festivals like the World Ski and Snowboard Festival, where they ran the second stage with cooking shows, music and live interviews.

The studio also had professional bookings from NBC and Bravo, and recorded a song demo for British pop star Rita Ora.

"I reached out to different people in the community, like Joey Gibbons (owner of pubs and clubs in the resort) and (councillor and businessman) Jack Crompton. These are people with businesses who were very supportive," Clark says.

He says that all of these experiences wrapped into the WMN Studio era makes him think that "it doesn't end here."

Clark says: "If I went into another space, I would be doing it with a totally different pair of eyes than the ones I was seeing with four years ago, in terms of what stood out as problem issues.

"We had just started getting our feet wet. The goal is to have many groups carrying out community projects in an office and facility with equipment. This had started to happened."

He is still keen to develop some of the projects that were initiated but did not have the chance to grow.

"There is a big window of opportunity. There are no big projects, no TV shows produced out of Whistler apart from Timber Creek Lodge, but there is room," Clark says.

So stay tuned, he says.