You Are NOT What You Eat:

How Digestive Problems Might Be Making You Sick And 7 Simple Solutions by Van Clayton Powel
May 30, 2012 9:00 PM By: Pique Newsmagazine Staff 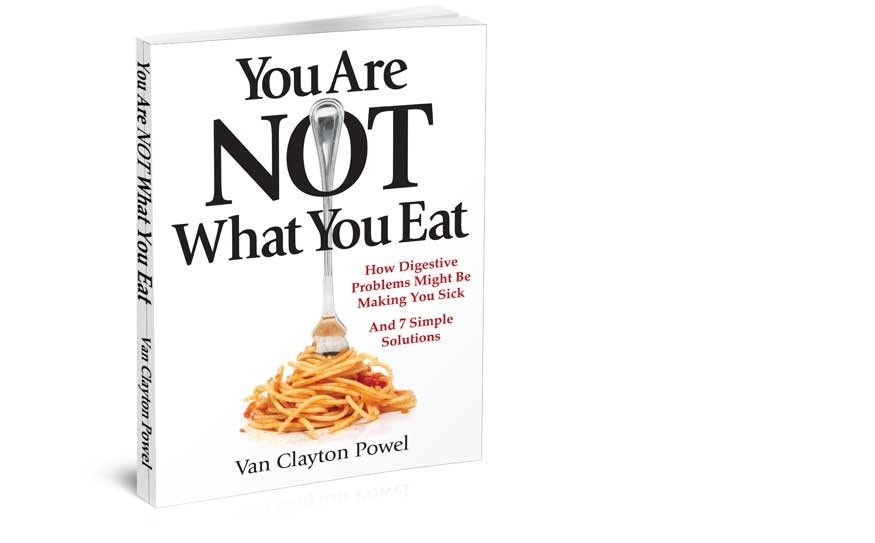 It's a myth that human babies are born with an innate sucking instinct. It actually takes about eight minutes for newborns to start making mouthing and sucking movements. As far as eating goes, it's probably the last time we really know what we're doing.

Once we finally begin to feed ourselves, we may often think about what we're eating but we probably don't give much thought to how we're eating it, except when our mothers tell us to stop eating like wild animals in their quixotic quest to teach us good table manners.

This might be a good time to mention I loathe self-help books, especially ones related to food. I don't want to be told what to eat, what not to eat and how everything I do eat is going to turn me into a mutant or lead to my untimely demise. I hew to the everything-in-moderation and nothing-white school of nutrition.

But Van Powel's new book, You Are NOT What You Eat: How Digestive Problems Might Be Making You Sick And 7 Simple Solutions, isn't so much a self-help tome as it is an owner's manual. Powel isn't going to tell you what to eat to have more energy, better digestion or greater luck with the object of your lustful desires; he's here to tell you how to eat... as in the mechanics, including, yes, chewing. And, surprisingly, what he has to say is both utterly fascinating and a light-hearted, delightful read. More surprisingly, I clearly have no idea how to eat, despite some six decades of daily practice.

Neither did Powel; that's why he wrote the book. "At the height of my (digestive) problems, I couldn't eat wheat, dairy, soy, chocolate, and a host of other foods without having a severe reaction."

Being a take-charge kind of guy, Powel drew on his training in Western medicine — a registered psychiatric nurse — and his immersion in Eastern traditions, Chinese medicine and Indian Ayurvedic practices. He hated being unable to eat things he enjoyed, was frustrated with the results of deprivation and figured the place to start was a thorough understanding of what the heck happens to food from the time it goes in our mouths until whatever's left leaves our southern exit.

The journey Powel outlines in his book and the seven steps he describes — the how to eat part — have had dramatic results. "Today, I can eat anything I want without a problem... all the symptoms have disappeared."

It's admittedly weird contemplating you may actually know nothing about something as basic as eating. But after reading the chapter on how digestion works, or as Powel puts it, "How Food Turns Into You," I was ready to admit I'd never really given how I eat a first, let alone second thought. What I eat, when I eat, how much I eat I'd given lots of thought. But how? You're kidding?

What he explained about digestion made too much sense to ignore though. So I jumped into his seven steps with heightened curiosity. The first one floored me. It was about fluids. True to form, Van didn't describe what to drink but when. To summarize, "Drink no fluids for at least 30 minutes before a meal, only about a half-cup with the meal, and no fluids for about one hour after." That shot a big hole in my pre-prandial cocktail. But the reasoning behind it was compelling.

I won't give away the other six simple solutions but I will say simple they're not. But as guideposts to better digestion, which in turn leads to better nutrition and better health, Powel's book is definitely food for thought.

Powel will be launching You Are NOT What You Eat at the Whistler Public Library Friday, June 1, at 7:00pm. The book is available at Armchair Books, on Amazon.com and Kindle, and as a pdf file at www.youarenotwhatyoueat.com.