Harvesting, fuel thinning and a controversial road realignment in the works
Feb 22, 2021 8:00 AM By: Braden Dupuis 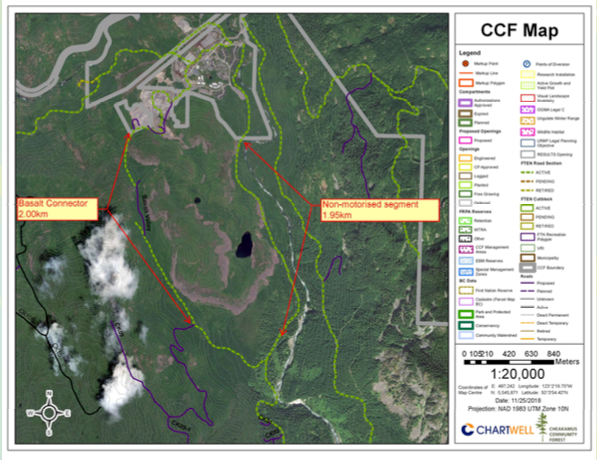 A map showing the route for a proposed new road through the Basalt Valley. Image courtesy of the CCF

After some quiet harvesting years in the Cheakamus Community Forest (CCF), forest partners are hoping to make good on some long-delayed harvesting plans in 2021 and beyond.

CCF forest manager Simon Murray was on hand for Whistler’s Feb. 16 Committee of the Whole meeting, where he provided an update on proposed harvesting sites, fuel thinning work and a proposed reconnection of Basalt Valley Road.

The road reconnection to the valley behind Whistler’s Cheakamus neighbourhood is necessary with the development of Cheakamus Crossing Phase 2, and has been under consideration for some time, Murray said, adding that it will require further discussion between council and the CCF board.

“This would be a route that would go through the Whistler Aggregates quarry and up and around the backside of the Loggers Lake area, and would join up with [potential openings in the CCF’s harvesting plan] in the Basalt Valley,” Murray said, adding that the route would be closed to the public.

The project would require 535 metres of new road to connect two existing roads at an expected cost of $71,500.

While the CCF believes the pros outweigh the cons, there are concerns with building a new road, Murray said, including forest fragmentation and the potential for a motorized recreation ban in the area (a decision that would ultimately come from the province, Murray noted).

Given the concerns, Councillor Cathy Jewett urged Murray and the CCF to do some public consultation.

“I will strongly advocate for public open houses and input, and also ensure that our local bike club, WORCA, is also consulted, because I think that this is a fairly well used portion of our forest,” Jewett said.

“And I think some people might be concerned about any changes.”

As it relates to harvesting plans, Murray detailed 10 proposed sites in the CCF (which is managed in partnership with the Lil’wat and Squamish Nations) that are still targeted for tree removal: four in the Basalt Valley, two near Brandywine Creek, and one each at Callaghan Creek, Brew Creek, 16 Mile Creek and Wedgemount Creek.

The stands in question are mostly comprised of hemlock and balsam, with a small component of yellow cedar and red cedar.

“Some of these have been on the books for some time, two or three years for some of them, even longer for [others],” Murray said.

“[There is] very little Douglas fir, and so there is a reason why these stands are still there, which is they’re not high value.”

While not all of the trees to be removed would be classified as such, logging old growth remains a sensitive subject for Whistlerites, pointed out Coun. Arthur De Jong.

Wording in the province’s recent Old Growth Strategic Review around empowering communities to manage their forests is encouraging to De Jong.

“In our case we are a world-class destination resort, and resource extraction is very awkward for our brand,” he said.

With a landscape level fuel break nearing completion south of Whistler at Cheakamus Lake Road, a new CCF proposal aims to protect Whistler from the north.

The 16-Mile Creek fuel break would be cut north of Emerald on Cougar Mountain Road.

“That would be something that is probably higher priority for the community, because the 16 Mile fuel break has been identified as a fairly critical landscape level fuel break that really would protect the community of Whistler from the north,” Murray said, adding that the project would also allow for improvements to the road.

“The road is in poor condition at the moment, and I think that there’s probably some support from the public there to upgrade the road, maybe have a better parking lot, and the commercial recreation tenure of The Adventure Group is certainly supportive of this.”

While the fuel break would be a multi-year project requiring external funding, “I’m hoping to get in there this summer and get a prescription done,” Murray said.

Watch the full meeting at www.whistler.ca/municipal-gov/council/meeting-agendas-and-minutes.