Communities That Care survey results offer glimpse into COVID life for young people in Whistler
Jun 11, 2021 8:00 AM By: Braden Dupuis 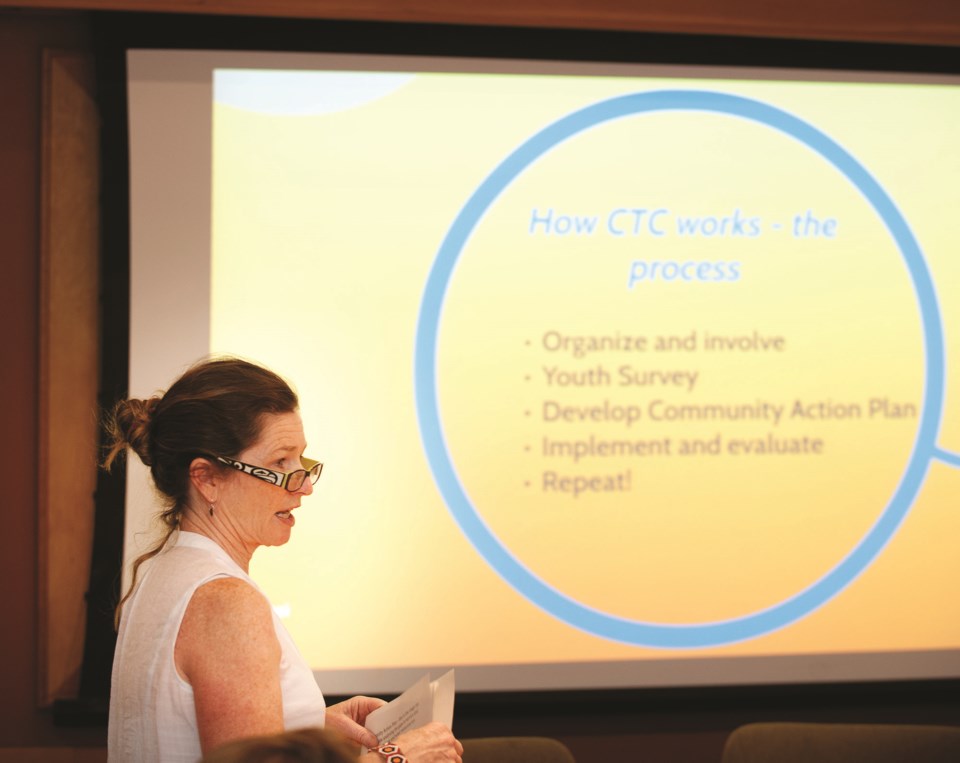 Communities That Care chair Cathy Jewett presents to Committee of the Whole in 2014. This year’s survey landed in the midst of Whistler’s worst outbreak of COVID-19.File photo by Dave Buzzard / media-centre.ca

Young adults are generally happy to call Whistler home, but the major barriers like housing, affordability and access to services were only exacerbated by COVID-19, according to recent survey results released by Communities That Care (CTC) Whistler.

Of 809 respondents to CTC’s Young Adult Survey—conducted from Jan. 15 to Feb. 15—83 per cent said they were somewhat or very satisfied with Whistler as a place to live, while 44 per cent said they plan to stay for several years or longer.

If they can make livable wages and find a steady, stable place to live, that is.

“Some of the verbatim responses … are heart-wrenching,” said CTC chair Cathy Jewett.

“The first time I read it I really felt emotionally impacted by it, for sure, and it helped me understand more about what, mainly our frontline workers, were going through during COVID.”

Coinciding with a spike in COVID-19 cases among Whistler’s young people, the survey (which polled people aged 18 to 30) provides a snapshot of a very unique time in Whistler’s history.

The survey just happened to land in the midst of “the biggest outbreak that we’ve seen in the community,” Jewett said, adding that the results offer insight into challenges around living and working conditions, as well as access to services and personal finances.

“And the biggest impact, I think that we can safely say, was in their mental health.”

Seventy per cent said their mental health has worsened since the beginning of the pandemic, and 31 per cent reported feeling “sad or hopeless almost every day for two weeks.”

Four per cent—36 people—said they had seriously considered suicide because of the pandemic.

Only 30 per cent of respondents rated their mental health as “good” or “very good.”

“Good wages, working conditions and not working 60+ hours a week to share said two-bed is mental healthcare. Mental health care is not ONLY yoga + a phone number for a therapist that costs more than you make in a week.”

With so many people reporting high levels of anxiety and depression, substance use among young adults was once again prevalent among survey respondents.

“It’s really interesting to see that the data on substance use, alcohol in particular, didn’t change from 2016 [the last time the survey was conducted],” Jewett said.

“Even though nightclubs and bars and the whole nightlife were shut down, obviously people were finding other ways to use.”

Ten per cent of respondents—about 80 people—reported witnessing an overdose since living in Whistler, and three per cent said they had overdosed themselves.

“[It’s] a lot more than I think people would expect happens in this community,” Jewett said.

Fifty-three per cent of respondents said they were concerned about the level of substance use they see in Whistler.

“The RCMP continue to address substance use … and overconsumption of alcohol with community outreach and education, and one of the things that we know also is that the RCMP is responding to more mental health calls than they may have in the past,” Jewett said.

“So how well equipped are they for that?”

The survey responses show there is a strong appetite for alcohol-free events in the resort, though knowledge of LUNA (Late and Unique Nighttime Alternatives) events was poor, with 56 per cent saying they were unaware of the group.

“The kinds of things that you can’t really do when you’ve got a pandemic going on.”

Unsurprisingly, the most frequently cited recommendation for improving life in Whistler was to fix the housing crisis.

“This pandemic has proven that the housing here needs to be sorted,” wrote one respondent. “People like us living in cramped conditions put us even more at risk. We are literally living in each other’s pockets.”

According to the survey, 54 per cent of Whistler’s young adults are spending more than 30 per cent of their income on housing, and 55 per cent said they are “somewhat” or “very” concerned about housing costs.

“One of the big issues that creates a lot of angst and a lot of stress for people is the instability of their housing—they don’t know when it’s going to be sold, and if it is sold, what happens next?” Jewett said.

With Whistler’s real estate market hotter than it’s ever been, the resort’s neighbourhoods are seeing massive turnover through home sales, demolitions and renovations.

“How are we tracking the loss of rental—not just suites, but rental housing … what kind of bed numbers are we losing a year, for instance?” Jewett said.

“The [Resort Municipality of Whistler] is building housing, and rental housing, but is it the right kind?”

While she’s a municipal councillor herself, Jewett sees her volunteer role with CTC as completely separate from her role at the council table, “because I want to be able to say some really hard things, and especially around housing,” she said.

“I think we need more data on what’s happening as far as market rental housing goes.”

The most interesting part of the report, in the opinion of its author Lizi McLoughlin, is how consistent the responses were.

“It really stood out to me across all of the themes how much people just want to build a life in this town, and the barriers that they feel are put in front of them,” McLoughlin said.

“[It’s] all of the things we talk about all of the time around housing, around wages, around mental health and especially in the last few months around the isolation.”

But another standout for McLoughlin was how many ideas young people have.

“So many [people in] this demographic don’t have any political power in the town, because they can’t vote, because [they’re] permanent residents or temporary workers,” she said.

“Improving those connections between decision-makers and this demographic of young people who are trying to build a life here would be the first step.”

At 29 years old, and having lived in Whistler for five years herself, McLoughlin can relate to those who shared their experiences in the survey.

“I’ve really gone through that experience of making this town my home, and I’ve seen that you really do need privilege, and you need mentors, and you need people to guide you through it, because it’s not an easy place to stay, is it?” she said.

“And especially in the last year, people who have stayed, I think they feel such a strong connection to the town; they so want to be a part of it, but they just feel like all of these things are just preventing them … [there’s] roadblocks at every turn.”

Asked if she had any advice for other young people, McLoughlin credited her day job with local charity Zero Ceiling, where she’s worked since 2017, as helping her find her own way in Whistler.

“Connecting with members of the community who are more established has probably been one of the main things that’s allowed me to really set down roots here,” she said. “And I think if people have the opportunity to do that and to connect across demographics and generations, it’s so beneficial.”

The survey’s findings are “100-per-cent” in line with what’s been happening at Whistler Community Services Society (WCSS) over the past 15 months, said executive director Jackie Dickinson.

While B.C.’s restart plan is starting to ramp up, demand for WCSS’ services hasn’t waned.

Prior to the pandemic, the food bank served about 300 servings of food a month, Dickinson said.

Pre-pandemic, about 250 people sought one-on-one counselling through WCSS’ outreach services; the new average is between 600 and 700 meetings per month.

The WCSS team is also now delivering 14,000 meals and snacks to Whistler’s five local schools every month (pre pandemic it was 20,000 for the entire year).

“Our programs are absolutely running over budget … and so we’re hoping with the BC Restart Plan and the reopening of our tourism economy that some of those numbers will change, but they may not,” Dickinson said.

“So we have to absolutely be creative, inventive in our funding, and we need to advocate that these are the needs of the community, so that we can keep supporting these people.”

The lack of affordable housing has always been a concern in Whistler, but the pandemic has shone a brighter light on the impact that overcrowded, high-density living situations can have on a person’s well-being, Dickinson said.

As COVID-19 ran rampant, many people had to decide between going to work sick or staying home and not getting paid; some found themselves in isolation for more than 30 days at a time.

At the same time, many didn’t have the proper support systems, Dickinson said.

“That is what I think this data also shows: that there were a lack of systems and support systems in place … which then caused them to experience this virus in a way that other people did not,” she said.

“Someone once said to me, ‘is this a moment, or is it a movement?’ And it’s a movement,” she said.

“It’s a movement towards a better direction for communities across this country around what we need to do to support our most underserved people, and data out of the CTC survey absolutely supports our ability to sit at tables and say, ‘here are the numbers.’”

Read the report in full at ctcwhistler.ca.