From Highway 99 to Fairy Creek, Whistlerites stand up for old growth

A number of Whistlerites joined protests both locally and on Vancouver Island over the weekend
Jun 3, 2021 7:00 AM By: Brandon Barrett 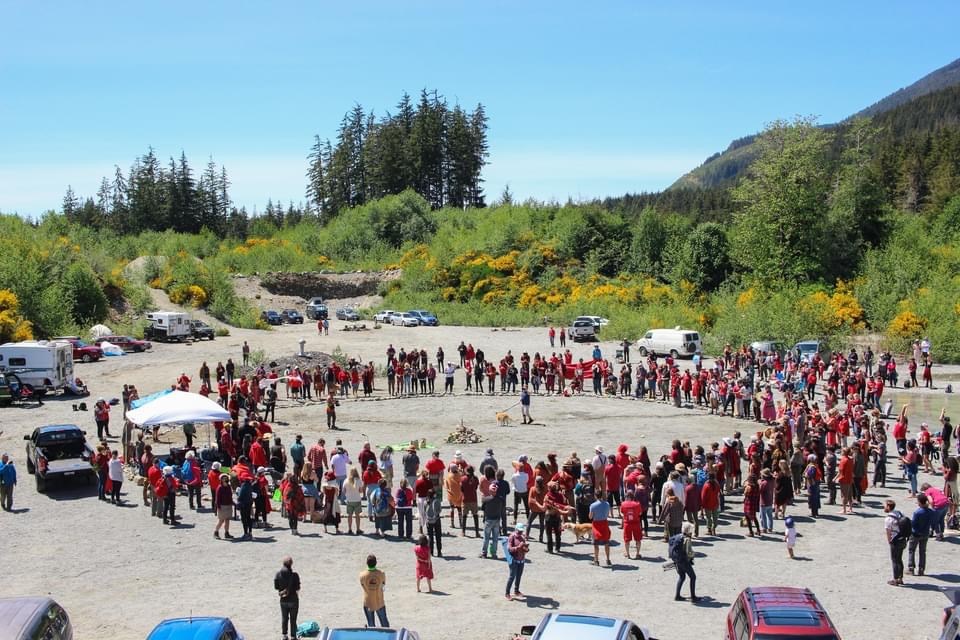 Roughly 200 protestors stood in solidarity with Chief Rueben George of the Tsleil-¬Waututh Nation and Grandma Rose of the Dididaht Nation in a ceremony last weekend, sharing stories, teachings and sacred songs from across Turtle Island. Facebook photo / Fairy Creek Blockade

Whistler’s Emily Kane had been following the protests against old-growth logging in Fairy Creek for some time before she decided she wanted to help in whatever way she could. But with travel restrictions still in place, the small business owner and yoga teacher figured it best to wait until travel in B.C. loosened up.

That was, until she messaged the Fairy Creek Blockade page on Facebook and learned how urgently support was needed. “They were like, ‘No, you are essential. Please come now. We need your help,’” she said. “I thought, if a logger can travel there to cut down this ancient temperate rainforest, then I can travel there to save it.”

So, Kane packed her bags and went straight to Fairy Creek, joining members of the Pacheedaht First Nation and activist group, the Rainforest Flying Squad, in their fight against the logging of the last unprotected, intact old-growth valley on southern Vancouver Island. She was eventually arrested and now faces a potential civil charge.

“Essentially I put my arm into a pipe and I was locked into that pipe. Then there’s concrete poured around it, so they had to shovel and jackhammer me out of that device,” she said.

Kane, who is white, said the arrest was mostly a peaceful experience, with RCMP officers treating her respectfully throughout, unlike some of the Indigenous protestors she heard from at the site. “I totally recognize the immense amount of white privilege I had in that situation, and I will tell you that not everyone has been afforded the same amount of kindness and respect,” she noted.

Protest camps have blockaded logging activity in the area—part of Tree Farm Licence (TFL) 46 in the Pacheedaht First Nation’s traditional territory—since August 2020, and the protests have the support of Pacheedaht members like Elder Bill Jones, who has spoken out both against old-growth logging and members of the Nation’s leadership that have allowed it on their land through TFL 46.

“We must trust that people involved in this movement are taking time out of their short lives and doing their very best to make positive change in this world,” Jones wrote in a recent open letter. “If people are willing to put themselves in this vulnerable position—of standing on a logging road or speaking out on the internet about the damage to our mother earth and the destruction of our sacred places—then we must trust that although we might not always say the right things or walk the right path, we still deserve to be treated with respect.”

Kane was one of a handful of Whistlerites who travelled to Fairy Creek to join the blockade last weekend, including Olympic skier Mike Janyk, as well as activist and owner of the now-shuttered Loka Yoga, Tina Pashumati James. James is no stranger to anti-logging movements, having taken part in the Blackwater Creek protests in the late-2000s to save a 17-hectare area where traditional medicinal plants were regularly harvested. Protesters at the time said there had not been proper consultation between residents of the area, the N’Quatqua First Nation, and B.C. Timber Sales. But with the pandemic putting renewed focus on Truth and Reconciliation, Indigenous land rights, and our impact on the environment, James feels the recent protests have a heightened urgency to them.

James also organized one of two protests against old-growth logging that took place in Whistler last month, joining similar events that were held in Mount Currie and Squamish. She is organizing another protest at noon this Sunday, June 6 at Whistler Olympic Plaza.

“I want to see the old-growth [logging] completely stopped for the sake of our forests,” she said. “We owe it to our future.”

The other Whistler protest was held Sunday, May 30, and drew roughly 120 people to the intersection of Highway 99 and Lorimer Road.

“The government needs to commit to sustainable logging practices,” said Sierra Haziza, president of Whistler Secondary’s Eco Club, who was one of many local students to take part in the demonstration. “Obviously, logging is an important resource, but I think that we need to look at how it can be done sustainably so we’re not killing those massive old-growth trees that are so important and so diverse.”

When it comes to some of Whistler’s oldest trees, between 30 and 55 per cent of the Cheakamus Community Forest’s (CCF) old-growth is protected, which for many locals doesn’t go far enough. One of more than 60 community forests across B.C., the CCF is managed by the Resort Municipality of Whistler, the Lil’wat Nation, and the Squamish Nation.

Like other community forests in B.C., the CCF has an annual allowable cut, the volume of industrial roundwood that can be harvested, as set by professional foresters, that is meant to balance environmental, social and economic considerations. The CCF continues to log some old-growth,* although harvesting has been relatively quiet since 2018.

At an April open house, CCF board chair Jeff Fisher said the plan is to eventually move away from old-growth logging, “but it’s a question of is it going to take 30 years, 20 years, 10 years or five years, and we are still examining options to change our harvest planning that way.”

Logging activity in B.C. has surged in 2021, fuelled by rising lumber prices that hit a record high in April, according to Madison’s Lumber Reporter. Provincial data shows that in the first four months of the year, 21.8 million cubic metres had been cut, up 65 per cent from the same period in 2020.

The Fairy Creek blockades haven’t seemed to slow down Teal Cedar Products, the company that holds the logging contract for TFL 46. For the first four months of 2021, Teal cut more in the area than it had in the same period last year, which was the company’s largest cut since 2012.

A review of old growth in B.C. last year commissioned by the province recommended a moratorium on logging old growth in areas where less than 10 per cent is still standing, which would include much of TFL 46.

-With files from Megan Lalonde

*An earlier version of this article incorrectly stated that the CCF logs old-growth both for timber and fuel thinning. While it logs old-growth for the timber market, fuel-thinning work in the CCF does not involve the removal of old growth.