Mike Douglas was camped on the peak of Cloudburst Mountain when he got the call — his friend and longtime professional skier Dave Treadway had fallen through a collapsed snow bridge and had plunged 30 metres into a crevasse.

Treadway, a legend in the ski community, had set out on Rhododendron Glacier, his home turf, about 15 kilometres outside of Pemberton. Pulling back from the more dangerous backcountry lines, by April 2019 the 34-year-old had settled down with two young children and a wife in Pemberton.

His father and a film crew had joined him on what friends describe as another “mellow day” but what would soon turn deadly.

“The skies cleared,” says Douglas. “It was just a nice patch of light on the face.”

The glaciers west of Pemberton have stood in for the planet’s coldest reaches in popular culture, from the Antarctic in The X-Files movie to the Arctic on TV shows like "Stargate." But just as the poles are melting into the sea, the Pemberton Icefield — along with 17,000 other glaciers across British Columbia — is facing its own slow demise.

Glaciologists estimate 22 billion cubic metres of water are lost from the province’s glaciers every year. That’s enough to fill up BC Place Stadium 8,300 times.

Brian Menounos, a glaciologist at the University of Northern British Columbia, says the link between rising carbon dioxide levels and melting ice is clear, with many of the province’s glaciers not expected to survive to the end of the century.

One winter might be colder and receive a lot of snow. But the long-term trend points in one direction.

“Envision walking up a sand dune. Every step you go forward, you slide one step back,” says Menounos.

In a recent study co-authored by Menounos, the researchers found 21 per cent of sea-level rise could be traced back to glacial melt.

But it's not just coastal communities that could suffer.

Doug Washer has been guiding people in the mountains for three decades; since 2013, that's meant flying in tourists to explore the electric blue ice cave of the Pemberton Icefield.

“What we do in those ice caves is take pretty pictures. But from a guide’s perspective, we’re recording change over the years,” he says. “There’s nothing like monitoring climate change like sitting there and watching an ice cube melt.” 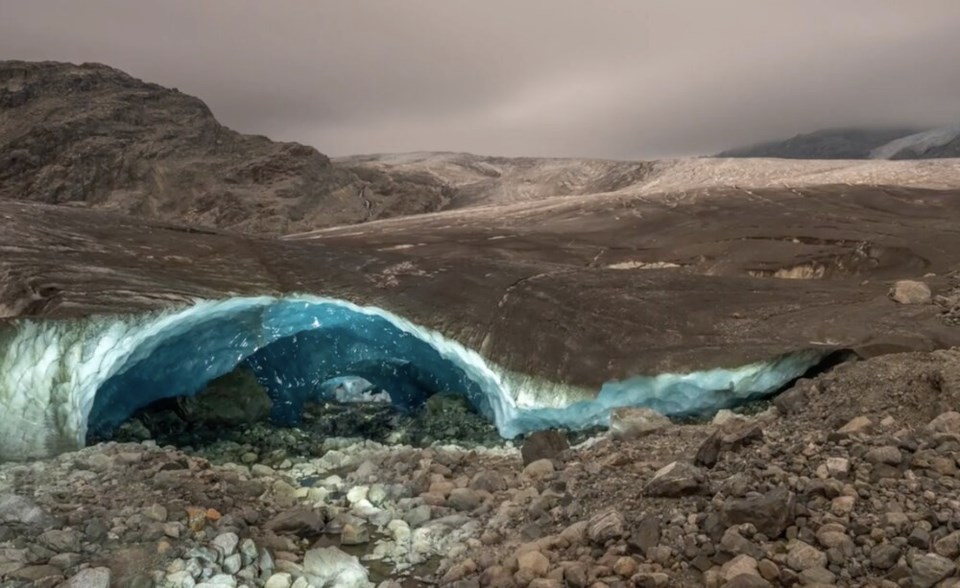 An ice cave in the Pemberton Icefield during the summer. Doug Washer says his team has recorded an average of 26 feet of ice loss at 4,400 feet elevation over the past 40 years. By Doug Washer/Head-Line Mountain Holidays

Washer says his team has documented an average of 26 feet of vertical ice loss every summer. That’s pushed them to move to higher elevations.

“We simply cannot travel through there with guests. The crevasses are too big, sinkholes have opened up. It’s just too dangerous,” explains Washer. “It changed so much, so fast.”

The loss of that slow trickle of ice-cold water into mountain streams is predicted to have devastating consequences for B.C.’s iconic salmon populations and the web of life that rely on the cooling effects of glacier runoff. A lot of those effects are expected to land at the feet of First Nations communities.

“The change in the last 150 years, some of it is so fast we haven’t seen it in the last 10,000 years,” says Johannes Koch, a glaciologist at Kwantlen Polytechnic University who spent the past 20 years studying glaciers in Garibaldi Park and the Pemberton Icefield.

“Most ecosystems are good at adapting to things, but they need time.”

So do people. By August, about a quarter of the water in mountain rivers comes from glacier melt in many B.C. watersheds, including in the Lower Mainland and the Okanagan. If we lose them in the summer, Koch says that’s bad timing for agriculture.

By winter, the cracks and fissures opened up during the warmer months don't get enough snow to make up for all the melt. Every year, that raises the risk of a deadly encounter for mountaineers, snowmobilers and skiers. Koch says it's time for those communities to re-think what they know about established glacier routes.

“The risk is increasing as the climate changes, as the terrain changes each year,” says Pemberton District Search and Rescue manager David MacKenzie, pointing to simultaneous pressure from growing crowds. “When you look to places like Europe or some places in the U.S., incidents are on the rise.”

YEARS IN THE MAKING

“Here I am skiing in the summer in August. It’s awesome,” he says. “It seemed like something that would always be there.”

As a pro skier, Douglas says he cut his teeth on the glacier through the first half of the 1990s. At the time, he would see up to 2,000 people and 20 summer ski camps a day on the glacier.

“Flash forward 33 years, that glacier is almost gone to the point they had to take the T-bar off last year. It’s like a bowl of milk,” he says. “That’s something that happened right before my eyes.”

By 2005, Douglas says he’d had enough. The melting ice had turned the pro athlete into an armchair activist. Over the next decade, he used his public profile to bring action on climate change to the slopes. 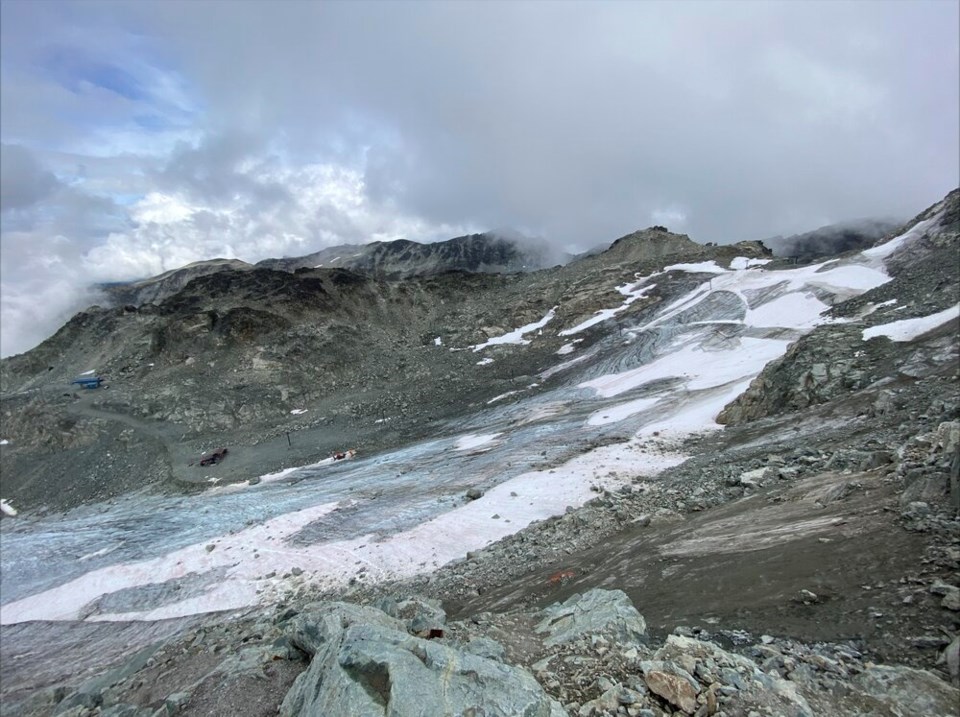 Horstman Glacier on Blackcomb Mountain loses a significant amount of ice in the summer. By Mike Douglas

In 2018, he helped found Protect Our Winters Canada, a climate advocacy group bringing together the outdoor industry with champion skiers, mountaineers and trail runners. Compared to other environmental organizations, Douglas claims its 20,000 members are among the youngest.

“An Olympic gold medallist shows up at your school, you’re excited,” he says. “We’re pushing the ski areas to operate as clean and green as they can, starting with Whistler.”

Pressure from the group has come in the form of 11,000 letters, which helped push a federal environmental review of the Vista coal mine near Hinton, Alta., a move that echoed across the industry after the government found expanding existing coal mines would have “unacceptable environmental effects.”

Of course, says Douglas, no amount of superstar athletes can stop the inevitable melt occurring across the world’s alpine valleys. He points to friends roping up to cross increasingly terrifying terrain, from the Alps to Mount Baker, and a hanging glacier the size of a cathedral, which prompted the evacuation of an entire Italian village when it threatened to collapse last summer.

“It’s just changing. The way that we’re moving in the mountains, and the fear that we feel,” he says. “It starts to mess with you mentally. Those glaciers are breaking up. They’re full of holes.”

‘RHODO WAS HIS HOME’

David MacKenzie got the call through 911 dispatch; someone had fallen into a crevasse on the nearby Rhododendron Glacier.

Pemberton is a small town with a tight-knit community. Still, nothing could prepare them to discover their friend and search and rescue colleague for years was lying below their feet, his body broken by a 30-metre fall into the ice.

Another helicopter from Whistler was called in, and, in total, 14 SAR volunteers helped recover the 34-year-old skier’s body. 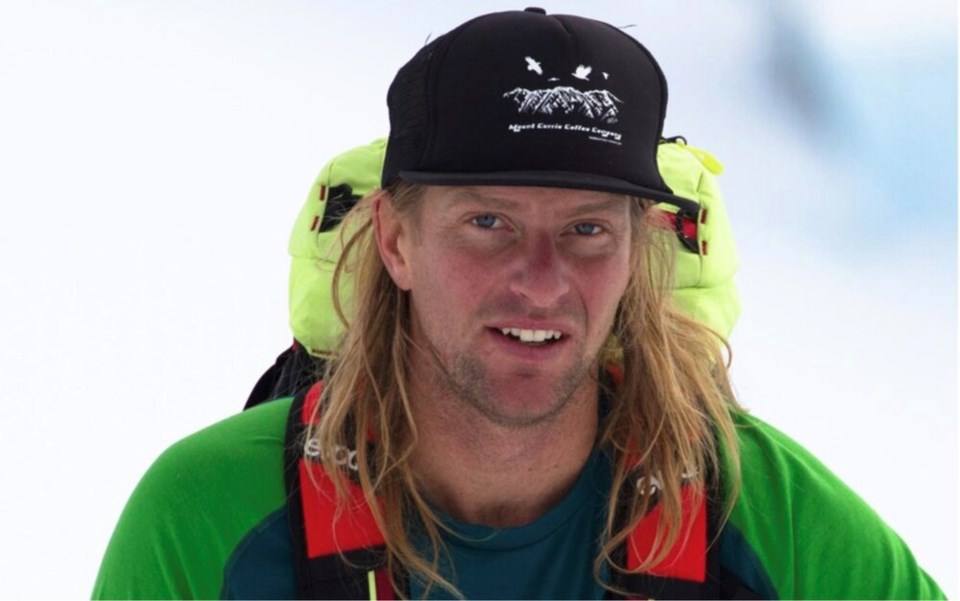 Professional skier Dave Treadway died in a fall down a crevasse near Rhododendron Mountain April 15, 2019. He left behind two children and his wife. By Vince Shuley

When Mackenzie looks back on the Treadway’s death, the search and rescue side of him says there’s always a chance something can go wrong on a glacier.

On the other hand, he says, as glaciers disintegrate in the face of climate change, “No level of experience can account for a changing in terrain.”

Or, as fellow pro skier and friend Mike Douglas put it two years after the accident: “My first reaction when I heard it was Dave was, ‘That could have been me.’”

“Dave spent so much time out there. Rhodo was his home. He knew it really well... Dave was in his happy place.”

When he looks forward 50 or 100 years into the future, Douglas says the worst thing we can do is to worry so much that we fail to appreciate what's left.

“Enjoy it. Get out there and get it while you can.”

With files from Brandon Barrett and the Canadian Press