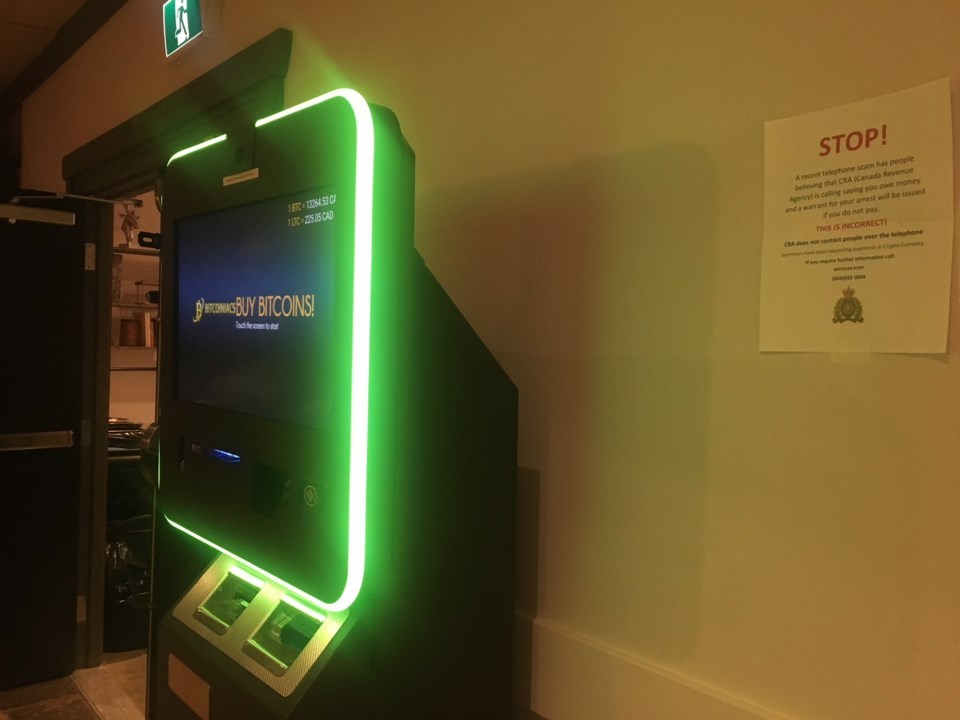 A Bitcoin ATM in the Summit Lodge where a Whistler woman sent close to $10,000 to scammers posing as tax agents in 2018. A warning from the Whistler RCMP is pictured on the right. File photo courtesy of the Summit Lodge

With tax season in full swing, local police went over some of the most common scams and frauds in Whistler, as well as the best ways to protect yourself, in a presentation last week.

RCMP Cpl. Nate Miller held the session over Zoom as part of a new virtual series organized by the Whistler Public Library and local seniors group, the Mature Action Community. With Canadians over 50 being the most targeted demographic by scammers, Miller offered some advice to the group on how best to protect against fraud, both online and off.

A scam that has increased in frequency in recent years, a Canada Revenue Agency (CRA) scheme is common in tax season, and often involves a caller posing as a CRA agent, sometimes masking their number to appear as if it is coming from the CRA, and threatening arrest or legal action if payment for overdue taxes is not received.

This scam can also take the form of an email or text.

“They’re really aggressive the way they come across and talk to you over the phone. It can be quite overwhelming for some,” explained Miller, who said Whistler has seen “a lot of people who have unfortunately become victims” of this scheme.

A similar scam involving a caller posing as an immigration official threatening deportation or arrest has also been noted.

A new wrinkle of the scheme involves the caller following up with the victim after money has already been sent offering to “recoup some of these losses if you pay a five-per-cent administrative fee,” Miller said.

“At that point, unfortunately the victim might be quite desperate and want to get their money back, as it could be a substantial amount, and they might sucked into providing more money to get those losses back, which obviously won’t happen.”

In any kind of call like this, police advise to ask for a call-back number, which, if provided, can be reported to the RCMP or the Canadian Anti-Fraud Centre.
Miller stressed that “time is on your side, so don’t rush into any of these scenarios to give our personal information.”

It’s also normal for callers to demand payment in cryptocurrency, which makes it virtually impossible for authorities to retrieve, or in pre-paid gift cards, both are payment types that a legitimate organization or government agency would never request.

Miller said bitcoin scams are increasing locally “as we do have a bitcoin machine in the [Summit Lodge] in town and a lot of these scammers now will ask for bitcoin transactions.” (The RCMP has notices up at the machine advising of potential scams.)

In 2018, a Whistler woman reportedly sent nearly $10,000 in bitcoin to scammers posing as CRA agents who threatened her with arrest over unpaid taxes.

CRA and immigration scams fall under the umbrella of extortion, which, in 2020, hit 6,689 reported victims and represented $12.5 million in losses nationwide.

A common scheme in tourist hotspots such as Whistler, this type of fraud generally affects visitors or prospective renters looking to land accommodation before setting foot in town. Given the crime often takes place outside of Canadian borders, it can be difficult to investigate.

“A lot of these will happen as fake print list ads … for a monthly rental and they’ll ask for the first month’s deposit. Usually what happens is the victim will show up at these vacation rentals, knock on the door and realize there’s already someone occupying the residence,” Miller noted.
Scammers will often “piggyback” on vacation rental ads on Airbnb and other legitimate platforms, Miller said, using the existing photos to market a property for rent that is already occupied or lists a non-existent address.

Experts say in the case of rental properties, if the deal seems too good to be true, it probably is, and they advise not to send any money online before being able to verify the property’s existence and address. Set up an in-person viewing (or have a friend do it for you).

A type of online scam that can incorporate other forms of fraud, phishing generally refers to attempts to acquire personal or financial information through the masking of emails and websites to appear legitimate.

Scammers will often do what’s called “brand spoofing,” sending emails or creating websites made to appear like they’re coming from a reputable company. In both instances, watch out for spelling and formatting errors. Don’t provide any information and never click on any attached links, as they may contain spyware or malware.

Phishing was the fourth most reported type of scam in Canada last year, at 3,672 reports, and given the embarrassment that can often be attached to it, is considered to be significantly under-reported.

Canada’s top fraud in terms of money lost last year, at $18.5 million, romance scams have grown in frequency with the rise of online dating platforms, particularly during the pandemic “when people are feeling lonely and isolated,” Miller said.

Romance scams capitalize on someone’s vulnerability and desire for connection, and fraudsters will typically advance the relationship quickly before eventually asking for money.

“Let’s say you’re starting to talk to someone and then they start showing interest in you, and then all of a sudden they want to come to Whistler to visit you but need help with transportation or a visa or they have a sick relative that they need help with or that sort of thing,” Miller said. “It could start off quite innocently … They may send flowers to your door. You think the relationship is developing somewhere, but usually these relationships will develop extremely fast and someone’s claiming to have a profound love for you within a couple weeks.”

In these cases, Miller said the best thing to do is slow down and ask yourself the question: “Would someone I had never met really declare their love for me after a few letters or emails?”

Another romance scam involves fraudsters using a fake website designed to mimic a legitimate dating site, where they may request personal information and/or payment to use the service.

In these instances, watch out for suspicious looking URLs and email addresses that may be “slightly off” from a legitimate site, Miller said.

This scheme involves a caller posing as someone’s grandchild in some form of distress, and requesting money be wired urgently to resolve the situation.

“It’s a numbers game for these guys,” Miller said. “They’ll call multiple people and then all of a sudden they’ll call the right person who has a granddaughter or a grandson. It can be quite convincing.”

This scam relies on creating a sense of panic in the moment, so Miller recommends “trying your best to slow down the situation and ask questions to yourself” about the nature of the call and caller.

To guard against all forms of fraud, Miller said to protect your personal and financial information “as you would your money. Don’t leave them laying around for others to take and only give out your personal details when absolutely necessary and when you trust the person you’re speaking or dealing with them.”