Whistler council awards contracts for infrastructure projects
May 4, 2021 8:44 AM By: Braden Dupuis 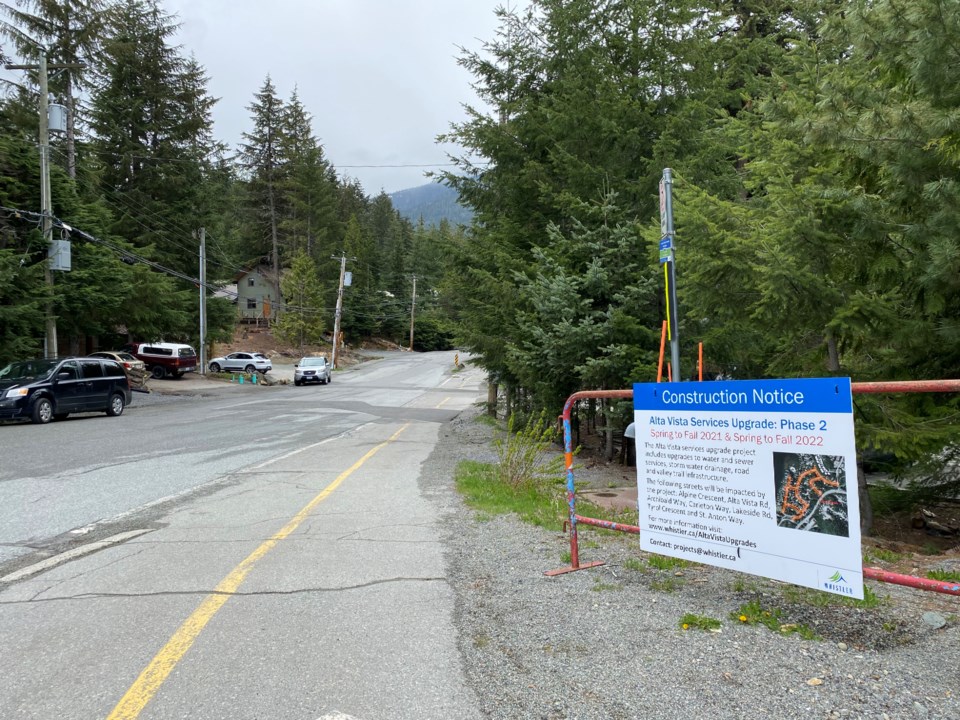 Work to upgrade services in Whistler's Alta Vista neighbourhood is set to resume after council awarded a contract for Phase 2 of the project on April 20.Photo by Braden Dupuis

Whistler residents and guests to the resort can expect some traffic disruptions and delays this summer, as the Resort Municipality of Whistler (RMOW) gets to work on various infrastructure projects.

Work is set to get underway this month and last until November (both in 2021 and 2022), and includes replacing aging water mains, upgrading sanitary sewers, and improving storm water drainage—some of the oldest remaining in Whistler—as well as upgrading road surfaces and sections of the Valley Trail.

Though council awarded a contact worth $2.7 million for Phase 1 of the work (completed last year), the overall spend reached $3.2 million.

“So [CME’s bid is] about 15-per-cent lower than our current budget, which, for myself, is a pretty comfortable place to be,” said capital projects manager Tammy Shore in a presentation to council.

Construction costs are “increasing every year” due to rising costs of labour and materials, and will likely continue on that trend, Shore said.

“But you never know with the market, and how competitive it has been,” she said. “Some people are bidding really low just to keep their people working. So yeah, it's a bit wild, the market these days.”

The long–contemplated Alta Lake Road Sewer project is also set to get underway with the awarding of a contract worth $898,000 to Conwest Contracting.

The project will connect 33 parcels on Alta Lake Road to the municipal sewer system.

Conwest’s bid came in 28-per-cent below the RMOW engineer’s estimate of $1.24 million.

A second contract worth $654,258 was awarded to Engineered Pump Systems Ltd., which will supply the residential sewage pump stations for homeowners.

The project was initiated via a formal petition process to affected owners conducted from May to August 2019.

The RMOW’s portion of the total project cost—just under $2.7 million—will come from existing sewer capital reserves, while the owners’ portion of the costs (up to a maximum of $900,000) will be recovered via an addition to their parcel taxes over a period of 20 years.

The two infrastructure projects will tie up road access to both Rainbow and Lakeside Parks, noted Councillor Cathy Jewett.

“I could also see that there would be an increase in traffic on Rainbow Drive as well, because some people would say, ‘Well I'll just go in from the north,’” Jewett said.

“So I see some unhappy people.”

The RMOW won’t be blocking off traffic, but “we will be posting signage that there's construction ahead, local traffic only,” Shore said.

“So in conjunction with the summer parks plan, we'll be doing a lot of advertising and marketing around where there's construction, other parks to go to, etc.”

The 2021 Summer Experience Plan is also going to implement a shuttle system from the Day Lots to help alleviate traffic, Shore added.

Lastly, a contract worth $1.5 million was awarded to Drake Excavating to upgrade the Spruce Grove, Crabapple and Golden Bear sewer lift stations.

New odour control systems will be included in the upgrades (to the relief of nearby residents).

The project will begin in May and will be completed by November.

Find updates for each project at whistler.ca/construction.