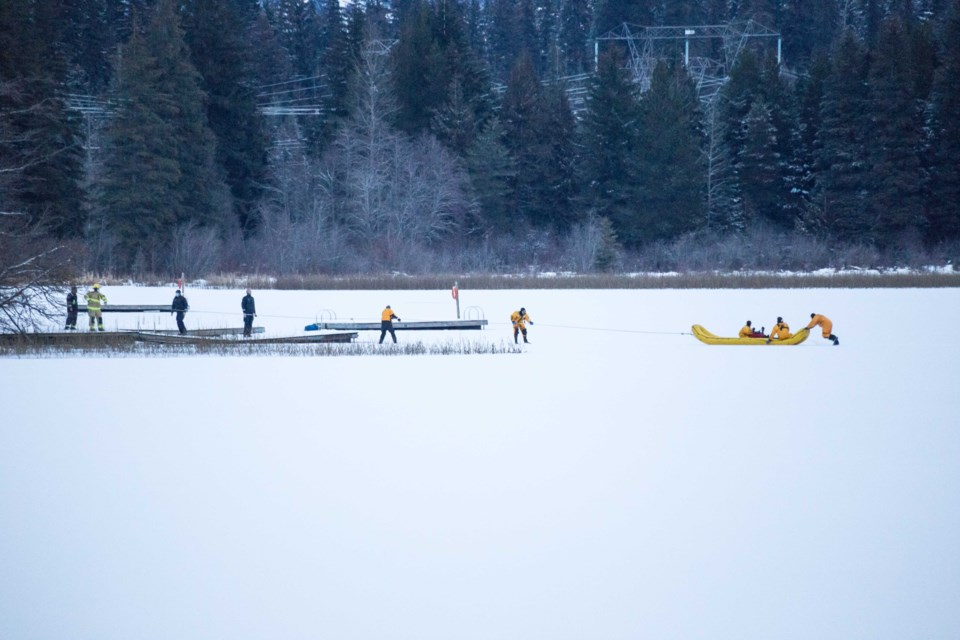 “By about two, three o’ clock in the morning I realized I’m just getting in their way, so I went home and had some rest,” De Jong recalled at the March 16 council meeting.

When he returned a few hours later, De Jong found about 15 firefighters all in a tight circle in the parking lot, “just jamming pizza down just to keep their energy going, all looking like chimney sweepers, just wasted and red eyed,” he said.

“And I was so taken by that scene. If I ever needed an image that defined a community’s anchor, a community’s heart and soul, it was there in that circle that morning.”

Several members of the WFRS (and one member of the public) were recognized for recent heroics at the March 16 meeting.

On Jan. 9, the WFRS responded to a report of a cross-country skier who broke through the ice at Alta Lake and was near drowning.

A team of six WFRS firefighters, supported by 30 paid-on-call staff, deployed the department’s Rapid Deployment Craft (affectionately referred to as the “banana boat”) to rescue the 78-year-old local.

“Each of you displayed outstanding fortitude and professionalism, which resulted in the successful rescue of the patient who was obviously in peril of drowning,” said Mayor Jack Crompton.

“Thank you for your service, and thank you for representing the Resort Municipality of Whistler, and the WFRS with great distinction.”

Kauffman was also presented a certificate of commendation for a daring rescue in Pemberton on March 30, 2020.

Off-duty at the time, Kauffman awoke to his neighbour’s house on fire and quickly took action.

“Using his many years of firefighting skills, Dan took charge of the emergency, and began setting priorities to perform rescue and save surrounding properties,” Crompton said.

When they realized the downstairs tenant was still in the house, Kauffman and another neighbour rushed in to save him.

“Fighting through intense radiant heat without any protective clothing, Dan and neighbour Pat extricated the male patient from the doorway and out through the front yard awaiting responding ambulances,” Crompton said.

Despite suffering first and second degree burns of his own, Kauffman then donned a pair of protective coveralls and worked a firehose to protect surrounding buildings.

“Deputy Chief [Cameron] Adams [of Pemberton Fire Rescue] would later comment that Dan really stepped up this night, and showed prowess to help and defend his fellow neighbours,” Crompton said.

“Thank you for your selfless service.”

Lastly, 15-year-old Jake Adler was recognized for his rescue of an 83-year-old who was drowning in Alta Lake this past summer.

Seeing the senior go under, Adler “quickly jumped into the water, and brought [him] to shore,” Crompton said.

“Fortunately he was unharmed, but the family wanted to recognize Jake, as they felt that his story could have had a very different ending.”

For a department so small, it’s rare to see three citations awarded in one year, said Chief John McKearney, but it’s something he’d like to do more of.

“This is the first one that I’ve done in Whistler, and I’ve been here for two-and-a-half years … so it’s not that often,” he said, adding that the last Whistler citation was awarded in 2015.

“For our firefighters and all the first responders who engage in very difficult incidents, we need to do more of taking the time just to recognize that, and we will.”