Board says snowmakers’ shared duties with other departments makes them inappropriate for bargaining
Feb 6, 2021 8:00 AM By: Brandon Barrett 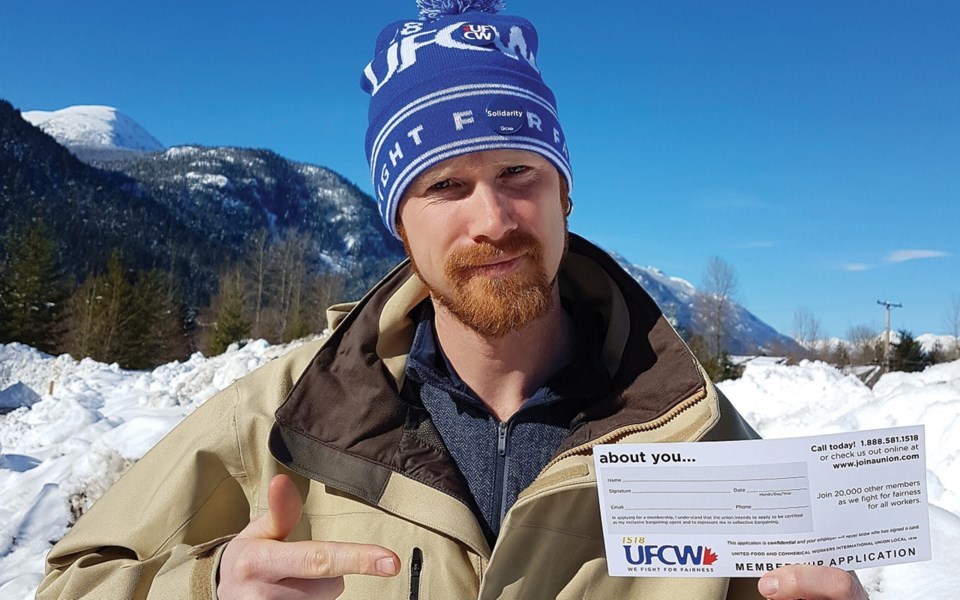 UFCW Local 1518 organizer Keith Murdoch has been working in some form with Whistler employees since late 2017. File photo

As previously reported in Pique, the United Food and Commercial Workers International Union (UFCW) Local 1518 originally filed the application in January 2020 on behalf of 28 employees in the snowmaking department, excluding millwrights and senior supervisors, which was ultimately dismissed by the LRB in April of last year. Then the UFCW applied to have the decision reconsidered, which was dismissed in a Jan. 6 ruling.

“Certainly we were disappointed with the decision, but at the end of the day, we need to respect the decisions made by the Labour Relations Board,” said UFCW organizer Keith Murdoch.

Snowmaking employees’ main concerns surround overtime pay and general wage increases, according to Murdoch. The base wage for snowmaking employees is $14.85 an hour, and tops out at $25, he said. Department staff has also had to sign averaging agreements that mean overtime only kicks in after working 10 hours in a day, not the standard eight as set out by the Employment Standards Act, Murdoch relayed.

The crux of the board’s finding was that the proposed unit was inappropriate for collective bargaining based on the “functional integration” of the snowmakers within other Whistler Blackcomb (WB) departments.

“[I]t is the integrated nature of the Employer’s operation as it specifically concerns Snowmaking and certain other departments in which those employees frequent that most strongly favours a conclusion that a rational and defensible line cannot be drawn around the Proposed Unit,” the decision read.

The UFCW believes it was an error to find integration, as it is common for WB employees to work in different departments in the summer, arguing the board “ought to alter its law on appropriateness to recognize [that] the sequential seasonal employment, in a different position and a different department, does not create industrial instability” from working both within and outside of the proposed bargaining unit.

In turn, the LRB said the original panel considered “a number of circumstances beyond the employment of some snowmaking employees in the summer” and said it was clear the finding of functional integration was based in part on the interchange of snowmaking employees with other departments in the winter as well.  The UFCW argued that snowmakers’ shared duties across departments during the ski season was merely “incidental,” while the LRB said, based on the evidence provided by WB, that it was “more than incidental.”

In its opposition to the LRB’s original dismissal, the UFCW argued that if its assessment of integration stands, “it would mean that either nothing less than an all-employee bargaining unit of approximately 4,600 employees [WB’s approximate workforce pre-COVID] would be appropriate, or that the smallest appropriate unit would be more than 1,000 to 2,000 employees,” an assertion both WB and the LRB countered.

Murdoch, who also ran as the NDP’s Sea-to-Sky candidate in last fall’s provincial election, has been working with Whistler employees in some form since late 2017, when a group of WB Snow School instructors approached the UFCW. Since dubbed the Whistler Workers Alliance, the group has set its lofty sights on potentially organizing WB’s entire workforce.

According to Murdoch, the LRB’s dismissal opens the door to expanding a WB bargaining unit to potentially include related departments, like grooming, in a future application.

“It gives us more clarification on what we need to do to be successful at unionizing the mountain. Certainly we’re not giving up,” he said.

The LRB’s decision came while ski-patroller unions at two of Vail Resorts’ U.S. properties—Stevens Pass in Washington and Park City in Utah—have been picketing for better wages and work conditions. Union members at both resorts said Vail Resorts has dragged its feet in negotiations, and talk of a possible strike has also surfaced (because the patrollers have been picketing on their days off, it is not as yet an official work-stoppage strike.)