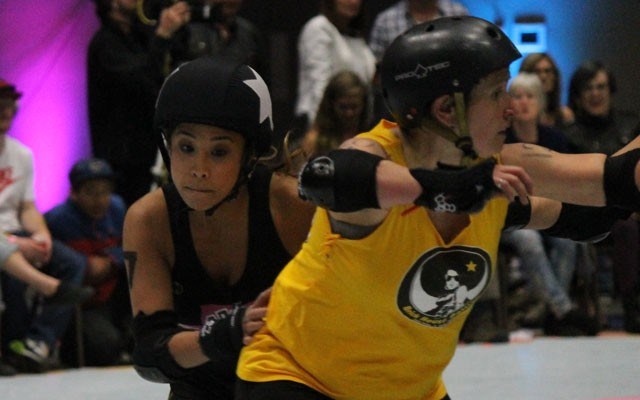 SHE DON'T GIVE UP Honey Badger of the Apex Pistols looks to get past Sixty Hurts of the Brick House Betties in Splatterday Night Fever action at the Whistler Conference Centre on Saturday, April 9. Photo by Dan Falloon

The Apex Pistols certainly didn't mind the bollocks — or the blocks — in roller derby action at the Whistler Conference Centre on April 9.

The all-star squad, made up of veterans from the Squamish and Whistler teams, held off a late charge from the Brick House Betties of Comox to hang on for a 168-139 victory at the annual World Ski and Snowboard Festival bout.

Squamish's Shannon Handley (a.k.a. Mala Justed) starred for the Pistols in the match, earning player of the game honours.

The Pistols extended their largest lead of the night to over 70 points at the half, and the cushion was just enough to hold off the strong Betties squad.

Handley felt the Pistols, which was made up of players from Whistler's Black Diamond Betties and Squamish's Sea to Sky Sirens, took a few jams to really get into gear, but were a force once they clicked into place.

"We started off a bit slow, because we're still a mix of players from both teams, we really had to work together. We had to get our groove with each other. Once we hit that, (we) stayed together well, played some really good shutdown defence and let our jammers do their thing and rack up some points," she said. "I think maybe the Brick House Betties were a little taken off-guard at first by us because we were very forceful, hitting hard.

"They obviously regrouped at halftime and came back from that."

Though the lead was a significant one at the half, the visiting Betties made it clear they weren't going to just roll over, scoring a quick 15 points and doubling their score within the first five minutes of the second half. The Pistols, however, responded to the threat and made the advantage hold up.

"You almost have to be cautious. You can't get too cocky when you have a lead like that because anything can happen," Handley said. "Everybody's getting more tired. The ref crew switches. The jam ref switches so they might see things a little differently. It's a balancing point. They came out and they fought really hard. We had to fight back and made sure that we maintained a bit of a lead."

Twyla MacDonald (a.k.a Ruby Whipper) of the Brick House Betties wasn't surprised to see her squad fall behind, as they tend to be slow starters, and acknowledged facing some challenges similar to the hosts with new players finding their way.

"We're usually a second-half team. It usually takes us a little bit to get into our groove," she said. "We also have quite a few pickup players, so we had to pull in players from other teams who we have skated with before, but we didn't actually have a chance to practice together.

"We're really happy with how we got the spread of the score closed up."

MacDonald was thrilled for the chance to come up to Whistler and have the Betties strut their stuff on a big-time stage.

"It's the biggest crowd we've ever played in front of and we love the energy here. I was here last year as an official, so I approached them and hoped to get us to come here," she said.

Check out Page 64 for a photo spread from the bout.