Athletes take dash for cash to the Internet 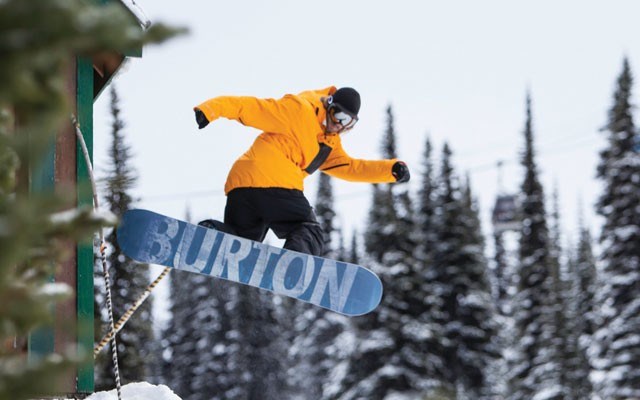 DOLLARS FOR DREAMS Local slopestyle specialist Logan Ayren Farrow is one athlete who has explored crowdfunding options to help him achieve his goal of going pro. Photo by Matt Walker/aspectphotography.ca

With the meat of athlete funding and sponsorship carved and plated for a select few elites, others chasing their goals are left scurrying to cobble together crumbs to sustain those dreams.

At 25, the slopestyle specialist doesn't have illusions that he's on the verge of becoming the 2018 Olympic gold medallist or the sport's next big thing.

But Farrow is still convinced he can put together a viable career on the slopes if he's just able to secure some high-level coaching.

"(I'm) not too far off," he said of how close he is to turning professional. "I've been building on my skills for years now so I'm at that pinnacle."

Several sites, including Pursuit, RallyMe, and Sportsfunder all have athletes and clubs making a pitch. MakeAChamp.com alone provides competition from Alpine Canada athletes like Dustin Cook, Marie-Pier Prefontaine, Mikaela Tommy and Brittany Phelan, and even the University of Laval men's volleyball team.

Though the results aren't what Farrow was aiming for quite yet, he said the campaign has been primarily positive as he makes connections.

"Crowdfunding — it's huge, it's coming into play now," he said. "The snowboard industry and the snow sports industry right now are in a crunch. There's not a lot of funding going around.

"I have a lot of friends that are on the national team, and even those people are struggling. These are our future Olympians, so for people who are even a couple steps below them, it's kind of impossible."

On his page, Farrow has budgeted $4,000 each to Whistler Valley Snowboard Club coaching – his first priority – and for a camp in Breckenridge, Colo. Another $1,500 is set aside to cover the costs of operating through MakeAChamp.com and other promotion.

Farrow said he entered the campaign with some in-kind sponsorship, as necessities like some gear and his lift pass were covered. He said his sponsors have also contributed prizes to the campaign – those donating at least $10 receive entries into a draw for a package including Oakley Airbrake goggles, Herd Headwear toque and T-shirt, three pairs of MyPakage men's underwear and a quartz pendant necklace made by Farrow himself. Donors giving a higher amount can secure themselves anything from social media "shoutouts," time with Farrow, or a signed photo, among others.

Farrow said he came up with idea to crowdfund almost a year ago, but took time planning his appeal and researching platforms before launching. He explained some of the other sites out there, some of which are more sport-specific, seemed driven to help only those looking for that final boost before Olympic glory. For this season, Farrow's focus is on qualifying for events like the Monster Energy Shred Show, held at the World Ski and Snowboard Festival in April.

"(Other sites were) very Olympic-driven – not that the Olympics aren't a goal of mine, it's the end," said Farrow, who eventually wants to focus on backcountry and heli-skiing in Alaska. "I feel like focusing on what's right in front of me is more crucial than to throw the word 'Olympics' around.

"I don't want to give people that false idea. I just want to be honest with what I'm doing right now."

Growing up in Sydney, N.S., Farrow rode mountain and BMX bikes before starting snowboarding at 17. He said he's hoped to become a professional athlete for nearly as long as he can remember.

"Snowboarding's not paying the bills yet, but it's happening more easily than if I was doing it on my own," he said.

Farrow said there's been some pushback to his campaign, as some decline to fund an athlete at the learning stage of his career, while others are opposed to the ask in general.

Farrow acknowledged managing the campaign cuts into an already-busy schedule for him.

"It's definitely taken a lot of energy. Between riding and the job that I have (at Mongolie Grill) and this campaign, I have barely been sleeping," he said. "But it's going to wrap up soon, so hopefully it all works out, and then I can focus on what matters."

"My dad and his girlfriend helped out a lot. They did a lot of it. I helped here and there," he said. "The campaign went better than we thought it would."

Riddle, who trains as part of the Canadian Luge Association's NextGen team of young athletes, said the governing bodies fundraise through bottle drives and 50/50 draws, while head coach Matt McMurray has been able to help athletes secure endorsements and sponsorships. Still, Riddle sought an extra cash injection to help cover the approximately $17,000 cost needed for one season of competition. Riddle said the money he raised will primarily take care of travel costs.

Teams are using the approach as well.The RallyMe website's homepage boasts that it is the "official crowdfunding platform" of several American associations for sports ranging from fencing to cycling to speedskating, opting to fundraise as collective bodies rather than leaving athletes alone. Canadian Luge Association executive director Tim Farstad explained the CLA is pondering taking a similar tack, currently weighing the pros and cons, to build on its 2014-15 Own the Podium funding of $1,020,000.

"The only problem with that is you almost become competition for athletes. We're fighting for the same dollar," he said. "There's not too many out there. You have to try everything to get a piece of the sponsorship dollar.

"It's a matter of fighting for the smaller sponsors now because it seems like the big ones, they're not really available anymore."

The CLA isn't a stranger to thinking outside the box for funding, having worn 'For Sale' stickers on their helmets leading up to the 2010 Winter Olympic Games in search of a lead sponsor. After landing Fast Track Capital as a sponsor in 2009, the partnership lasted for four years. The CLA went to the well again by wearing the stickers last year, but the response wasn't quite so swift.

However, last October, the CLA went to a ranch – with athletes decked out in full gear – after the owner had donated a butchered cow to help offset food costs. Farstad said any help is welcome.

"With our sport, you can't really connect with that huge (company) like Canadian Tire or Visa because we're not giving them as much exposure as they would like," he said. "(Donors) want to get to know the team. They want to give money and be part of the team. That's what we're trying to sell."

Farrow, meanwhile, hopes to see more funding available for athletes in the future so they can focus more on improving than on the logistics to make it happen.

"If someone has a passion or a dream, there should be some support out there to help them with that," he said. "The way the industry is right now, they want people to struggle and pretty much make it on their own before they're willing to step in. They want you to be a professional rider already, and then they're going to step in and take advantage of that."